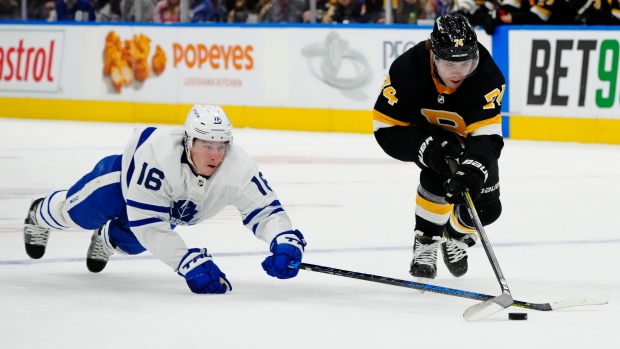 The TSN Hockey Insiders discuss the NHL tightening its COVID protocols, Jake DeBrusk's trade request sparking league wide interest, where Carey Price fits in potential Habs rebuild, Evander Kane not ruling out a return to the Sharks, and much more.

Gino Reda: Gentleman, tis the season for holiday parties and charity events, but Chris, given what's going on with COVID, is the NHL being forced to play the role of The Grinch?

Chris Johnson: They are. There's simply no other choice. We can't live life just yet the way we all want to. So the NHL has changed its protocols, tightened them up a little bit. Remember in November you had both the New York Islanders and the Ottawa Senators have to be shut down for a period. No one wants to see that happen again and cases are rising around the continent. And so that mean's no holiday parties, no charity events, no public autograph events for NHL players. Even the instruction that when it comes to their family time over the holidays, not to have too large of gatherings because of possible exposure. As for the Olympics, I think we're going see it go right to Jan. 10 before the NHL and the NHLPA make a decision because this is very much a day-by-day type situation.

Reda: The Jake DeBrusk situation continues in Boston. He was a healthy scratch over the weekend. He has officially asked for a trade. What kind of interest has he generated right now, Darren?

Darren Dreger: A significant amount, Geno. As many as 12 teams, maybe more than 12 teams have already checked in on the Jake DeBrusk situation with the Boston Bruins, but the reality is the Bruins now need Jake DeBrusk in their lineup. They've got Brad Marchand suspended, their American Hockey League team in Providence is dealing with a COVID issue, so they need him on the ice right now. I would say the New York Rangers are among the teams that have expressed some interest. You've got the Vancouver Canucks, maybe Montreal, maybe Calgary. Certainly Arizona. Go down the list. Historically speaking, when there's been other Jake DeBrusk trade situations and speculations, the St. Louis Blues have been near the top of that list as well. You talk about a kid who could score 20 to 25 and he's scored 16 times in the playoffs. So those stats matter.

Reda: When Jeff Gorton was handed the keys of Montreal he was immediately tasked with the task of finding a French-speaking general manager to work with him. What can you tell us about that search, Pierre?

Pierre LeBrun: Well, whether it's Montreal or Anaheim or Chicago, all those teams are going to run into some of the same obstacles at some point when they begin their interviewing process which is that some candidates are available now and some are not available until after the season. And in the case of Mathieu Darche, who I believe is on Anaheim's long list of names, doesn't necessarily mean they'll reach out for an interview, but he is on their long list of names and we know that he will be of interest to the Montreal Canadiens. Well, he is available. He does not have a clause in his deal that says he has to wait until the rest of the season. Julien BriseBois, the GM in Tampa, does not believe in holding his people back so if and when Montreal and/or Anaheim reach out, Mathieu Darche will be available to go for an interview if he chooses to do so.

Dreger: Well look, anytime there's a Shea Weber spotting in Montreal, that's going to generate a bit of a buzz. And it most definitely has this week. He's there on a NHL mandated medical evaluation. It's all part of the LTIR situation that Shea Weber and the Montreal Canadiens are in. It's believed that ownership would love to have Shea Weber around this team as often as he can manage. I mean that's what leadership means off the ice. Now whether that's a short-term thing or a long-term thing, that will ultimately be determined by Shea Weber's family, but it's something to keep an eye on moving forward.

LeBrun: Well, if you're going to talk about Shea Weber, then let's talk about Carey Price. One goes with the other, right. The two great leaders of the Montreal Canadiens. It's going to be one of the great moments, I think this season guys, when Carey Price is healthy and back and to see the Bell Centre react to his return. But, bigger picture, longer term, what about his future with the Montreal Canadiens? There's a new person running the Montreal Canadiens we know in Jeff Gorton. Carey Price was very tight with Marc Bergevin, everyone knows that. He's 34-years-old. Where does a 34-year-old future Hall of Famer fit in the plans of a rebuild, if that's what Jeff Gorton plans to do. They're teams around the league, some contenders, I can tell you already that are intrigued to find out where that all goes. He has a full no-move. We know that he waived for the Seattle expansion draft. That was a very specific circumstance, so that Jake Allen wouldn't get taken. But, I will say this: it's all about him getting healthy and back on the ice, but longer term, closer to the trade deadline, perhaps the off-season, I think an interesting conversation perhaps to be had there between Gorton and Carey Price's camp.

Reda: Elsewhere, Evander Kane's 21-game suspension for submitting a fake vaccination card ended Sunday night. He was immediately waived by the Sharks and cleared. So what's next, Chris?

Johnson: Well, that still remains to be seen. Certainly the preference at this point is to try to move Evander Kane to another NHL team, it's something the Sharks have been exploring. His agent Daniel Milstein helping with that process. But, you know as Evander Kane starts back up with the San Jose Barracuda in the AHL on Tuesday, he's aware he might have to go back to the Sharks, that perhaps that transaction might not materialize and it's something he's open to doing. Not sure how he'll be welcomed back in that dressing room, there was certainly was some tension there last season, but if this trade doesn't happen, we might have to see him come back in the teal before he plays in another city.