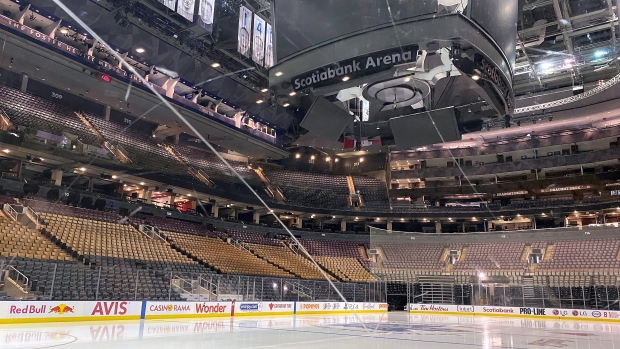 TSN Hockey Insiders Bob McKenzie, Darren Dreger and Pierre LeBrun join host James Duthie remotely to discuss figuring out the process of how to get players back to their NHL cities and how the draft and the 2020-21 season will be impacted by the delay.

We would have been in the middle of Round 2 of the Stanley Cup Playoffs by now in a normal time, it’s not normal. Instead, we’re in another round, or I guess an extension of self-isolation.

Dreger: Yeah, that’s the expectation that the National Hockey League will extend its quarantine period. It expires on April 30th, it’s likely that would be extended into mid-May. Now, there is a call between the National Hockey League and the Players’ Association which is expected, at earliest, tomorrow to go over some of the questions and concerns. I know the return-to-play committee of all NHL players also expected to virtually meet this week. Players in Europe need to know in the very near future when are they coming back? How are they getting back? How is that travel process going to be managed? And is there going to be a 14-day self-isolation period required, when those players get back to North America. Now, at any point, what happens if a player, a member of the personnel staff of the National Hockey League or any involved in the restart process tests positive, what happens at that point? How will players see their families again when you get into Phase 3 and Phase 4 of the quarantine process? Is it reasonable to expect players to be separated from their families for up to three or three-and-a-half months. And finally perhaps the biggest of them all, is a cost analysis that will happen between the NHL and Players’ Association. And what I mean by that is, with no fans in the building, you’ve got the travel cost, you’ve got the divisional city location costs, hotels will be mammoth. All of that. And what about the extra precautions and medical measures. How much is all of that going to cost? And when you weigh everything, is it worthwhile? I suppose it will be, but there’s a lot of back-and-forth first that has to happen.

A ton still to be determined. I think we’ve all come to realize over the last few weeks that whatever happens with this season, the next season is also going to be affected in some way. What sort of plans have they come up with for next year, or at least are they kicking around?

LeBrun: What the league has talked about as a possibility with its teams over the past little while is delaying the start of next season into December. That’s right. We had thought November would be a delay, well December is now on the table as well. Nothing is written in stone, of course. But teams being told this is a possibility. And there’s a couple of reasons:

But that’s why the league is willing to wait until next December. And by the way, here’s the kicker: They’d like to have an 82-game season even if it starts in December, which means playing into July next year.

Lots of buzz about an early-June draft, anything new on that?

McKenzie: You know we thought we might hear official word this week that they’re doing it or they’re not doing it. It’s my understanding now that the final decision could drag into next week. Right now, we’re still relatively pessimistic about getting a June draft. If you were looking at the NHL’s optimism/pessimism needle, because there was such a negative reaction to the idea of doing an early-June draft before the league knows whether or not there is going to be anything to do with the 2019-20 season, then they would need to figure all of that out. In any case, not likely to happen. But, you never know and a final decision, probably, next week.