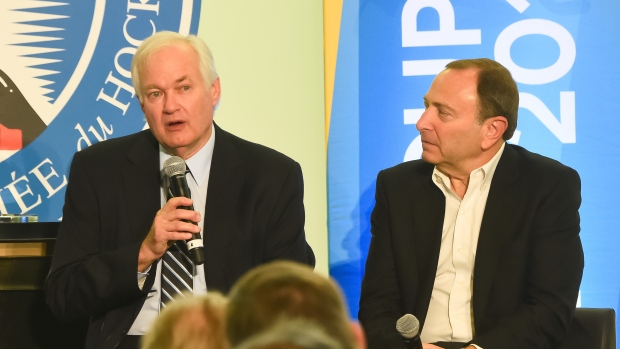 Gino Reda and TSN Hockey Insider Bob McKenzie discuss the latest on the NHL / NHLPA negotiations, including the return to play tentative target dates, and when Free Agent Frenzy could begin. Bob also has the latest on which Canadian city could be hosting both the conference finals and Stanley Cup Final.

Reda: News has been breaking on an almost-daily basis and the man breaking most of that news is our very own hockey insider Bob McKenzie. Alright, Bob. What’s the latest on all of the negotiations and the Return to Play?

McKenzie: Well, keeping in mind that everything with this is super tentative, I’ve been through collective bargaining negotiations over-and-over again. But nothing has been as fluid where things change minute-to-minute, hour-to-hour, day-to-day. And if the NHL and PA feel like they need to push the targeted or tentative dates back, they’ll push them back with impunity as necessary. But, let’s look at what the starting framework for this would look like:

Reda: Alright, getting back to the awarding of the Stanley Cup. Being in Edmonton or even in Toronto, either way, it will be the first time the Stanley Cup is being awarded on Canadian ice, since the Boston Bruins celebrated in Vancouver (2011).