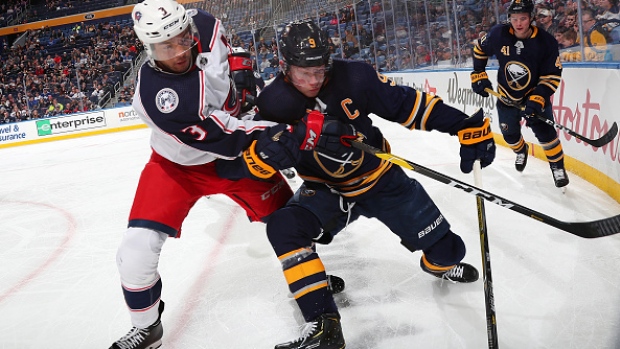 While Jack Eichel hasn't officially asked for a trade, it certainly sounds like the star centre would welcome a change of scenery. The TSN Hockey Insiders get you up to date on potential landing spots for Eichel. As well, with the offseason looming who are the top available free agents? All that and more in this edition of Insider Trading.

What's the latest on the Jack Eichel situation in Buffalo?

Pierre LeBrun: Well, first I think it's important to stress that his camp, led by agent Peter Fish, hasn't actually officially asked for a trade, sources confirm on this day. Although I think Jack Eichel's comments perhaps will do the trick from Monday's availability. Now, we'll wait and see what Kevyn Adams, the GM of the Sabres, has to say. He's having his availability on Wednesday. Does he want to repair this relationship? Does he want to keep Jack Eichel or is it time to move on? And certainly in talking to teams around the league, they think that it's going to be a trade. One of the reasons they think that is that Eichel's no-move clause kicks in a year from now on July 1, 2022 which really gives him the hammer at that point about where he could end up. So, this is the one offseason that Kevyn Adams has left to move Eichel wherever he wants if that is indeed what he wants to do. Now, a couple teams come to mind for me as potential fits. One is the Minnesota Wild, obviously the idea of Eichel playing with Kirill Kaprizov on the same line certainly seems to be fun to think about. But the Wild have to sign Kaprizov, they also have to sign Joel Eriksson Ek this summer, so they would have to make the money work. The New York Rangers. Hardly a secret that last offseason the Rangers did have discussions with the Sabres about Eichel. Again, I think the Rangers want to be careful about their cap situation as well.

Frank Seravalli: And Pierre, if you're the Buffalo Sabres I'm not sure that you want to trade your franchise player in Jack Eichel to another division rival and face Jack Eichel for six-to-eight times in a given season. So, do you know where's pretty far from Buffalo, that would be California. Don't sleep on two California teams: the Anaheim Ducks and their GM Bob Murray wants to make a splash and the Los Angeles Kings. The Los Angeles Kings have seven players on Craig Button's Top 75 Affiliated Prospect List. They have the goods to bring in a guy like Jack Eichel to SoCal and more importantly they've had interest. I can tell you that the Kings have had a cursory conversation before the deadline with the Buffalo Sabres about acquiring Jack Eichel and I expect that to pick up in a big way this summer.

Frank, you put out a good looking quiz question in your recent article on TSN.ca, reading "who's the only defenceman to hit double digit in goals in each of the last seven years?" Give us the answer and why that's significant going into the summer?

Seravalli: Well, it's not Victor Hedman or John Carlson, it would be Dougie Hamilton, a guy who has not won a Norris Trophy, but it's significant because he's the No. 1 player on our TSN free agent frenzy board as we move into the off-season. Hamilton has been the model of consistency as you mentioned. He was tremendous this season, a 14-game point streak. I can tell you this: At this point with the Carolina Hurricanes as negotiations have been ongoing with his camp and JP Barry and the Hurricanes, well they decided as Don Waddell told us on the DFO Rundown podcast, that they were going to table those contract talks until after the season. A lot of people wonder if that's expansion draft related. I think they're further apart than many realize and there's a lot of work to be done in order for Dougie Hamilton to stay. So I think there's better than a 50 per cent chance that Dougie Hamilton makes it to market this summer. There will be no shortage in interest. By the way, Alex Ovechkin is not on our board. We have no indication that he'll be with any team other than the Washington Capitals and I believe guys they're budgeting $11 million, depending on term, for Ovi for next season.

LeBrun: Well, Frank I'm in total agreement with you that Dougie Hamilton would be the No. 1 UFA if he goes to market. But, I'll tell you who might be the No. 1 defenceman available if that is indeed the case via trade, that would be Seth Jones, who has a year left on his contract. Now, I'm not saying, everyone calm down, that he's being moved definitely. What, I'm saying is that this is a crossroads off-season for Seth Jones and the Columbus Blue Jackets because of his contract situation. Now, he did raise eyebrows with his comments during his season-ending availability when he talked about not wanting to make any quick decisions and that he has a year left on his deal and he's going to be around for at least a year. A lot of GMs around the league looked at those comments and said 'oh, oh, what does that mean?' Well, I don't think that the Jackets are concerned. I think they view that as some posturing ahead of a big contract negotiation. I can tell you the Jackets have already reached out to Seth Jones camp to want to get the ball rolling on those conversations. This is, arguably, the most important contract negotiation in Jackets history. Pat Brisson, the agent for Seth Jones, intends to speak to his client by the end of the week to start getting the ball rolling on what they want to do this off-season.