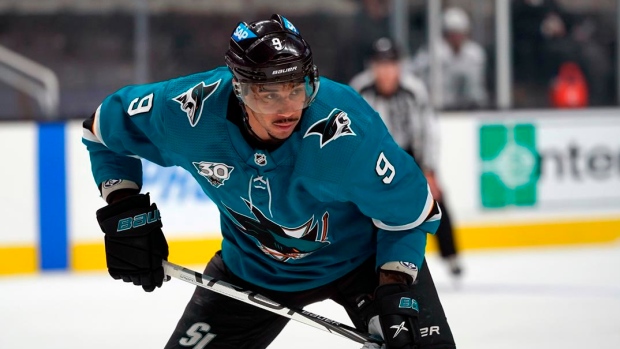 The TSN Hockey insiders break down the Evander Kane situation, what comes next for the Canucks and Travis Hamonic, Nikita Kucherov’s injury, an extension for Adam Fox? And why there is no rush for the Jack Hughes camp to sign an extension.

From the moment we heard about Evander Kane’s 21-game suspension we all began to wonder, okay, so now what? Where do we go from here? Kane says he wants to come back, the Sharks, potentially have some options when he’s available to return on November 30th, what options do they have? 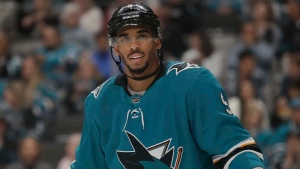 Chris Johnston: One option they don’t have is the possibility of terminating what’s remaining on Evander Kane’s contract. Two sources confirm that the CBA won’t allow for that to happen once Evander has cleared the suspension. Essentially, it’s because the punishment he received here, the 21 games for the COVID-19 protocol violation, is the punishment and so it puts San Jose in a bit of a tough spot. I don’t get the sense, at all, that they’ve decided how they’ll proceed going forward here. Perhaps at some point he’s waived and sent to the AHL, maybe they try to pay him to stay home, I think a trade will be pretty difficult at this point in time, but certainly they can’t terminate that contract.

On Monday, the Vancouver Canucks announced that they have placed Travis Hamonic on unpaid leave of absence, so they’ve got a hole on the blue line right now, what’s the plan? 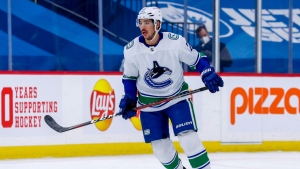 Pierre LeBrun: The plan for now is trying to forge ahead with the group they have. I traded messages with Canucks GM Jim Benning on this day, and that’s what he said – that they’ll stick with the guys they have. I think part of the reason for that is, you mention the leave of absence for Travis Hamonic and we wish him the best, by the way, but the key word is temporary in the Canucks statement on Monday. Which means that, all things being equal, the sense is that he will be back at some point. So even though Travis Hamonic is off the cap right now, you don’t go out and just replace that cap money because eventually he’ll be back on the cap if he’s coming back to be a Vancouver Canuck, so for now Tucker Poolman, Tyler Myers are your top two on the right side and the Canucks will try to make that work.

Last year Nikita Kucherov missed the entire regular season with a hip injury, came back played in the playoffs, and that worked out pretty well for them. He’s hurt again now, it is a different injury yet it also looks to be a potentially long-term situation. Where else does this situation differ? 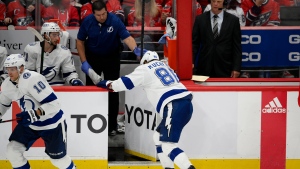 Chris Johnston: Certainly the cap implications are not nearly as favourable for the Lightning, because it’s good news. Nikita Kucherov isn’t done for the rest of the regular season they’re still determining the exact length of time he’ll be out with this injury, it looks likes it’s going to be weeks rather than days. So there would be an option potentially to put him on LTIR but the fact he wouldn’t be there all season means they can’t necessarily bring in other players to help them in the playoffs, they can look for short-term help during that time if that’s the route they go but it’s quite different than last year when they were able to take a $90-million payroll, give or take, into the playoffs.

The flat cap era right now has meant we’ve seen a lot of teams trying to play cap gymnastics, but at the end of the day is it safe to say that the big guys are still getting the big dollars? 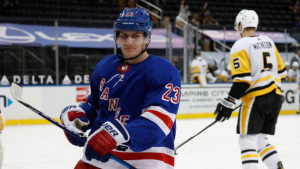 Pierre LeBrun: Yeah, notably on the blue line as we’ve seen in the last few months, most recently, Charlie McAvoy, $9.5 million a year for his extension. A guy to keep an eye on this season is Adam Fox, the guy who just won the Norris Trophy, and he’s up at the end of the year. He’s coming out of his entry-level deal and guess what? His camp will be looking for a contract that starts with a nine, now I’m told there have been very preliminary discussions, very preliminary, nothing serious in nature yet. The thing is, the Rangers have spent a lot of their cap money. You think about Mika Zibanejad’s extension that starts next year at $8.5, Panarin makes $11.6, I think they overpaid for Barclay Goodrow, so it’s not Adam Fox who’s going to pay the price for the Rangers cap issues moving forward. So keep an eye on that situation because he is salary arbitration eligible, oh boy.

Speaking of teams in the U.S. northeast that could be in a tough situation when it comes to renewing contracts, Jack Hughes in the final year of his ELC with the New Jersey Devils, any progress there? 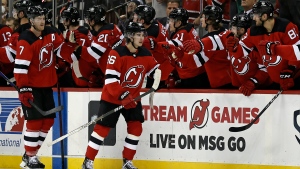 Pierre LeBrun: There have been some initial conversations between the Devils, and they were initiated by the Devils, and Jack Hughes’ led by Pat Brisson of CAA. This one’s an interesting one because on the one hand, I think the Devils would love to do what Montreal did with Nick Suzuki, a young player with a year left on his entry-level deal, and sign him ahead of time. In Jack Hughes’ case, I think the Devils, for sure, are probably saying let’s sign this young franchise player before he really pops this year. He’s not had that huge year yet, but you feel that it’s coming here. That’s why I think Pat Brisson and CAA are going to say what’s the hurry, for sure they’re going to get him signed but does it have to be right away, this could take a while.