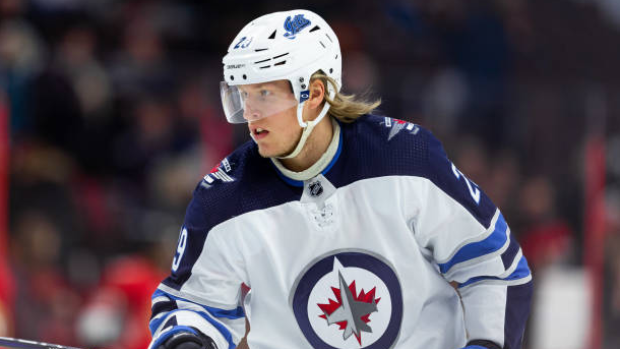 TSN Hockey Insiders Darren Dreger, Pierre LeBrun, and Frank Seravalli discuss why term will be the focal point of negotiations between Patrik Laine and the Blue Jackets, the expectations Travis Green will get extended in Vancouver, and when the Sharks will get approval to return home and play games.

After playing their first eight games on the road, everything we've heard so far suggested local health officials were not going to allow the San Jose Sharks to play at home this weekend. Any chance that changes?

Seravalli: There's an outside chance that changes. February 1st and February 3rd are still on the table for the Sharks to open their season in San Jose, but it remains unlikely. There's a lot of work that would need to get done in the next 24 hours in order for the Sharks to return home.

Whereas Santa Clara County announced earlier this week that they will allow pro sports to be played in San Jose, the thing is their local restrictions are actually quite a bit more restrictive than the NHL and NHLPA, which is why the Sharks have had to work with those two organizations to try and get something done. Basically Santa Clara County doesn't want those members of the Sharks out in the community while they're at home.

And what they're looking at here, if not they wouldn't be allowed to return home until February 13th, having them open with an NHL record 14 consecutive games on the road.

It’s been a rough start for the Vancouver Canucks and Travis Green is coaching in the final year of his contract. Any concern for him?

Dreger: The fact that he doesn't have a contract after this year is reason for concern but I can tell you that there is intent from the Canucks perspective to get the extension done. Now, Green is highly valued by the Canucks, he's highly valued as a head coach across the NHL, and he's been brought up through the organization in terms of coaching. But the process of managing the financials in a pandemic are much different than they would be under normal circumstances. So this is going to take a bit of time.

Patrik Laine is set to become an RFA after this season, any news on the talks with the Columbus Blue Jackets to extend?

LeBrun: There have not been any talks yet and that in itself is surprising. I think some teams around the league thought that if and when Laine got dealt that team would have asked permission to perhaps explore what a new deal would look like. But I think Blue Jackets GM Jarmo Kekalainen has a lot of confidence in his relationship with Laine. I know that Kekalainen told me that he had a terrific conversation with Laine over the weekend about the team's long-term vision and him wanting to be a part of that solution.

But for the time being I don’t think Laine's camp is in any hurry to begin talks. I think they want their client to get to Columbus, adjust to his new surroundings, and worry about the contract much later down the road.

Here's where it will get interesting: we know that Kekalainen offered an eight-year deal, the max deal, to Pierre-Luc Dubois. It stands to reason he'd be willing to do the same for Laine. I'm not sure that Laine's camp would look at eight years. When you look at the economic landscape of the NHL and the flat cap, a medium-term deal probably would make more sense for Laine whenever they get to that.

Dreger: Dubois continues to wait in quarantine in Winnipeg. We know that all seven Canadian teams have issued the request to the Canadian government to shorten the 14-day quarantine period but it doesn’t sound like that’s going to happen before the expiration date of the 14 days for Dubois.

There’s a bit of an imbalance, obviously, when you look at how things work in the U.S. and parts of the U.S. the quarantine can be as little as 48 hours with consecutive negative tests. In Dubois' case, he may not be available to the Jets, missing 6-7 games. That’s a tough one even through a trade of this magnitude.

St. Louis Blues defenceman Vince Dunn signed a one year, $1.875 million deal just before camp opened because he didn’t want to miss any time. Is it inevitable he's on the move?

Seravalli: Not inevitable, but it certainly seems possible given Blues head coach Craig Berube's comments and the fact that Dunn is expected to be a healthy scratch for the Blues tonight. I’m told the Blues have engaged with teams on conversations about Dunn. Many thought that he might have been traded in training camp; alas, he has started the season with the Blues, but pardon the pun, his time may be ‘Dunn’ in St. Louis.