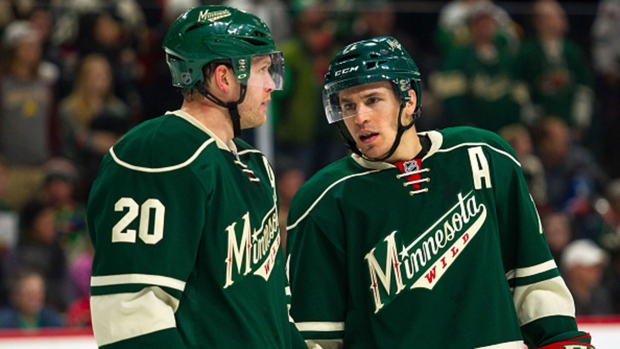 The TSN Hockey Insiders discuss what's next for the Wild after buying out Zach Parise and Ryan Suter, the Predators' interest in trading a defenceman before the expansion draft, the likelihood of Gabriel Landeskog hitting free agency, Elias Pettersson and Quinn Hughes continuing their contract talks with the Canucks, and more.

Where do the Minnesota Wild go from here after buying out veterans Zach Parise and Ryan Suter?

Darren Dreger: Well, there's some things that Bill Guerin is definitely going to be in the market for but to facilitate a double buyout of this magnitude you clearly needed a full buy-in from ownership of the Minnesota Wild into the direction that the General Manager Bill Guerin intends on taking the Minnesota Wild. This is months of discussions to get to this point. Yes, we know Kirill Kaprizov is a priority. Likewise is Kevin Fiala. But beyond that we also know the Minnesota Wild would love to add a top line centre. Now they've been linked with interest to Jack Eichel of the Buffalo Sabres. I believe that the Wild are going to make an offer, a trade offer on Jack Eichel, but they're also not going to blow their cap space and they're not going to overpay with trade assets. It is going to be interesting to see what Guerin does at centre ice moving forward.

The next major date on the NHL calendar is this Saturday when all teams need to provide the league with their protected lists for the Seattle expansion draft. That means some really tough decisions for the Nashville Predators.

Pierre LeBrun: They've already made one by trading Viktor Arvidsson last week to the Los Angeles Kings for a second and a third. I know a lot of people wondered why they did that, well it's because they felt they would probably lose Arvidsson for nothing to Seattle potentially. So at least they got some value back, but now what? They've got five defencemen they really like. Of course, we know about Roman Josi, Ryan Ellis and Mattias Ekholm, but they are also really high of course on Dante Fabbro and Alexandre Carrier, who had a really good, strong push late in the season. They don't want to lose him, so what can they do? They can do a side deal with Seattle. I do believe there has been a conversation between the Kraken and the Predators or they can simply trade one of their five defencemen to another NHL team. Or there is option C, which I find hard to believe, but if they protect five defenceman among the eight-skater route. I do think there will be eight skaters in their protection list, but I think it will be four and four, and they'll have to make a hard decision on what to do with the fifth defenceman.

What's the latest on the Colorado Avalanche and their negotiations with captain Gabriel Landeskog?

Dreger: It's hard to visualize the Colorado Avalanche going into next season without their captain Gabriel Landeskog, but I'm also told that the two sides are not even close in their negotiations to extend Landeskog with the Avalanche. Now the position of the Colorado Avalanche is going to have to change significantly, according to sources, or absolutely, Gabe Landeskog will go to market. It's early in the process. There's no doubt about that, but the position on both sides doesn't look very strong right now.

LeBrun: There was positive news that came to light for the Avalanche on this day, which by the way was the deadline for teams to ask players with no move clauses to waive for the purpose of the expansion draft, but the reality is weeks ago veteran defenceman Erik Johnson indicated to the Avs that he'd be willing to waive his no-move for the expansion draft. That is huge for Colorado in terms of their flexibility. It allows them to protect all three of their top defencemen, in terms of Cale Makar, Samuel Girard and of course Devon Toews, but now the decision for Colorado is do you protect Ryan Graves as your fourth defenceman, meaning you go the eight skater route or do you go 7-3-1 and leave Ryan Graves exposed? That is a decision Colorado has yet to make.

Dreger: Staying in the Pacific, the Vancouver Canucks and CAA Sports, who represent Elias Pettersson and Quinn Hughes continue to grind away on those contract extensions. I'm told there was a lot of dialogue. They're mostly focused on term right now. What's going to make the player happy. What's going to make the team happy. Good discussions last week. The discussions and negotiations have continued this week, but there is a lot of work to be done on both of those extensions.

LeBrun: An update on pending UFA goalie Chris Driedger. We talked about last week how teams are already phoning Florida thinking of perhaps jumping the queue and trading for his rights before July 28. Well, what I can tell you is that there are absolutely half a dozen teams with serious interest in Chris Driedger, but here's the caveat: if there's teams in there thinking they can get him for about $2 million a year, I think that price tag is going to be closer to $3.5 million a year to get Driedger, given the interest. And don't forget in all of this, Seattle I believe, has also shown interest in him. So perhaps they take him and cut off everyone else from free agency on him.