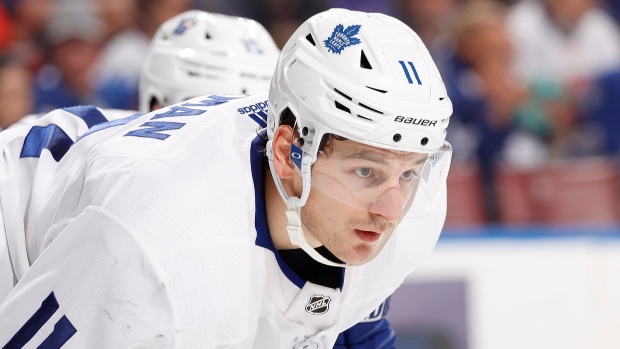 TSN Hockey Insiders Darren Dreger and Pierre LeBrun provide the latest on how Zach Hyman's talks with the Oilers and Leafs are progressing, Tampa Bay's desire to unload Tyler Johnson for cap space, the hunt for defencemen by western Canadian teams, and much more.

Gino Reda: They are the Insiders, Darren Dreger and Pierre LeBrun and guys, as soon as the trade freeze lifted on Thursday, the action was all over social media. All kinds of chatter and a lot going on so let’s check out our most recent Trade Bait board. No change at No. 1 of course with Jack Eichel, irreconcilable differences with the Buffalo Sabres, it’s a matter of when and not if with him. The Canucks are looking to move Nate Schmidt. Marc-Andre Fleury and Robin Lehner share the No. 6 spot on our Trade Bait list. The Knights have spent a combined $12 million per year on that duo, something’s got to give there. And a lot of talk about Zach Hyman at No. 10, Darren. Give us the latest on what’s going on with his situation.

Dreger: Yeah, ongoing discussions primarily with the Edmonton Oilers although there are some who believe that the Toronto Maple Leafs aren’t officially out. But look, if the Oilers are going to have access to that eighth year, then it has to be a sign and trade and Kyle Dubas and Ken Holland are going to have to communicate on what the compensation is going to be. The Oilers aren’t going to feel comfortable paying a third- or a fourth-round pick, they look at a sixth- or a seventh-round pick as compensation. Otherwise, they’ll wait until the 28th. We know that Zach Hyman spent at least a good part of Wednesday in Edmonton meeting with the brass and touring the city. So you might want to put a little bit of money on the Oilers.

Reda: Elsewhere, it looks like Evgeny Kuznetsov has certainly worn out his welcome with the Washington Capitals. Darcy Kuemper is available and Pierre, Tyler Johnson No. 14 on this list. Nice contributions for the Tampa Bay Lightning in their last two Stanley Cup wins but the money’s just not there to keep him on the club?

LeBrun: The Lightning still have to do more cutting. Losing Yanni Gourde and his $5 million salary is not enough in the expansion process. So priority No. 1 right now as far as I’ve been told on this day for Tampa is to try and find a new home for Tyler Johnson. Who you may remember was waived twice before this past season as Tampa tried to move him then but went unclaimed. He’s got three more years on his deal at $5 million. He’s got 22 teams on his partial no-trade list. That list was submitted a while back and it’s an absolute priority now for Tampa to try and find a home for a player they really respect but obviously need to move for cap reasons.

Oilers, Jets and Canucks all shopping for Top Four ‘D’

Reda: Darren, a bit of a theme among at least three of the four Western Canadian teams in terms of what they’re looking for on the market?

Dreger: Yeah, Winnipeg, Vancouver and Edmonton are all looking for upgrades on defence, top four defencemen. The Vancouver Canucks have the ninth pick overall and Jim Benning says he is willing to listen to absolutely everything. But the Edmonton Oilers obviously have to do some repair work after losing Adam Larsson to the Seattle Kraken. They’re continuing to talk with Tyson Barrie, they’ll continue to negotiate there. Tyson Barrie probably wants more than the three years that the Oilers are comfortable with but they may play hardball in that regard. Rasmus Ristolainen of the Buffalo Sabres, feels likely he is going to get traded, all three teams have interest there. But what about Brenden Dillon of the Washington Capitals? This is a bit weird but given the fact that he was exposed to the Seattle Kraken in the expansion draft. I know that there are clubs that are at least kicking tires. So those three Western Canadian teams definitely trying to upgrade their blueline.

LeBrun: Well another Canadian team, the Montreal Canadiens, Darren also in that ‘D’ market right now. Marc Bergevin, the GM of the Habs, confirming what we were reporting earlier this week, that replacing Shea Weber in some form or other. Can’t really replace Shea Weber but going out and getting a ‘D’ is certainly a top priority for the Montreal Canadiens. We know that they talked to the Buffalo Sabres about Rasmus Ristolainen but there are other irons in the fire for Montreal and I think to some degree, some interest in pending UFA David Savard as long as the price isn’t exorbitant. So again, look for Montreal to make that a top priority.

Dreger: Yeah you know what guys, we haven’t forgotten about Dougie Hamilton. We’ve talked a lot about Seth Jones, it feels like Dougie Hamilton has been out there forever. The expectation is that if there is a trade fit, perhaps that interest elevates over the course of the weekend after the draft. Everybody now is focused on yes on making deals, but also making first-round selections on Friday and then completing the draft on Saturday. So it’s not a back-burner per say but there is expected to be more interest in Dougie Hamilton from those teams maybe that don’t land the piece, like a Seth Jones in Chicago. Philadelphia would like to do something but the Flyers don’t have a ton of cap space but Chuck Fletcher can be creative so wouldn’t count him out of this as well.

Reda: Guys, as soon as the expansion draft wrapped up Wednesday night, we were kind of waiting for the other shoe to drop. Apparently Pierre, there was no other shoe?

LeBrun: No Gino, it’s rather interesting. I think, you know, we were so trained into what to expect because of what Vegas did four years ago and let’s quickly go back to that for a moment. As part of their 30 selections four years ago, Vegas also got a first-round pick, four second-round picks, a fifth, a sixth, oh and (Alex) Tuch, (Shea) Theodore and (Reilly) Smith among others. While that was part of their picks, Seattle made their 30 picks, did not, we confirm today, get other assets. No side deals to go with those 30 picks. But the story’s not over for Seattle. I think what they’re doing is, they want to do their work on the back end of the expansion draft, not on the front end like Vegas did. So, they got loads of cap room, I think they want to go after teams that have cap issues and try and leverage that in some trades over the next couple of weeks. Plus, I think they’re going to be players in free agency, probably more so than Vegas was in July 2017. So the story’s not over yet, but it is already quite different for Seattle compared to Vegas.