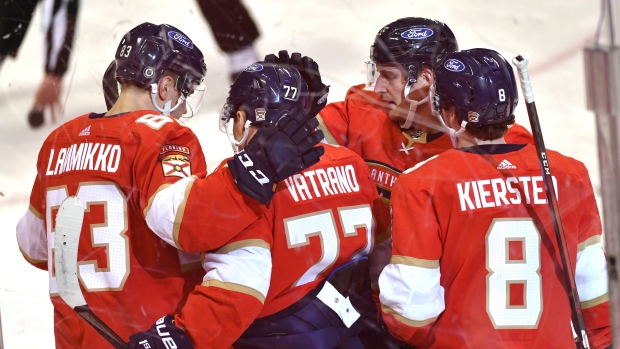 On the Saturday before Monday’s NHL trade deadline, all games are inevitably tinged with drama about who stays and who moves.

With a paucity of impact players available, the Kyle Palmieri acquisition by the New York Islanders underscores the urgency contenders feel to shore up weaknesses.

No doubt, front office personnel will be monitoring their mobile devices as these games unfold.

How this game is a pick ’em is perplexing. The Stars are home, but they have been as bad at home as on the road this season. The Dallas forward group is still decimated by injuries. Consequently, only the Detroit Red Wings and Buffalo Sabres have lower 5-on-5 goals for per hour. Dallas goaltender Jake Oettinger has been capable in goal (0.92 GSAx), but both Panthers goaltenders have been superior since March 15th.

With betting, predictability is coveted. And one thing Florida offers is resiliency after losses. It took until March 21, 30 games into the season, for the Panthers to record their first three-game-or-longer losing streak. Prior to that, they had lost consecutive games only once. When they finally did drop three straight, the Panthers ripped off a half-dozen wins before getting swept by the Carolina Hurricanes this week.

On Thursday night, the Panthers struggled at 5-on-5, as they were held to their third-fewest shot attempts and fourth-fewest shots this season. Since they rank third in the NHL in shots per 60 minutes at 5-on-5, this 3-0 loss to the Hurricanes was a sharp deviation from their normal.

Dole out credit to Carolina: The Hurricanes did a really nice job taking away the Panthers’ speed through the neutral zone and limiting Florida’s east-west passing, especially in Game 2. Florida’s Aleksander Barkov line is especially proficient in connecting on 10-to-15-foot passes through a seam. But there were less of these on Thursday night.

The Stars exhort their defencemen to engage on the rush and facilitate offensively. Unfortunately, Dallas can be disjointed in its transition defence, which proved costly on Tuesday night when the Chicago Blackhawks scored their first two goals off odd-man rushes with Miro Heiskanen and Jamie Oleksiak attempting to stoke scoring.

Such sloppiness will spell trouble against Florida. Not only are the Panthers very dangerous in transition, but they will have their forwards fly the zone as soon as shot-blocking opportunities arise in the hopes of springing a counterattack chance.

With No. 1 defenceman Aaron Ekblad injured, the Panthers are missing a key component of their power play, as Ekblad has six goals on the man advantage. Florida could argue it lost Thursday’s game because of its special teams.

But the Stars aren’t the Hurricanes. On the season, the Panthers and Stars are neck and neck in expected goals and high-danger chances, and in their last dozen games, the Panthers are slightly better. And the Panthers have Barkov, easily the best skater in the game, who turns opponents into ice cream left out on a very hot day.

Urging the under in a game between two teams that scored a combined 13 goals in their games on Thursday might seem a peculiar decision. But there are a host of reasons to think this will be a low-event game.

First, the goaltenders. All of us pine for the type of safety net that goaltender Andrei Vasilevskiy provides Tampa Bay, where any mishap or error gets whitewashed by his inimitable size and athleticism.

Vasilevskiy leads the NHL in Goals Saved Above Expected (GSAx) and is well-positioned to capture another Vezina Trophy. Moreover, a banged-up Lightning defensive group is getting healthier, as Ryan McDonagh and Erik Cernak have rejoined the back end, allowing Tampa Bay to play its top-four defencemen. When McDonagh and Cernak were out of the lineup, the Lightning allowed a combined 11 goals and lost three straight games.

But Nashville isn’t a defensive slouch. Since March 1, Predators goaltender Juuse Saros is first in the NHL in GSAx. The Predators have won 11 of their last 13 games, and while many of those contests have been against teams that will miss the postseason, this ignores how they won.

In 10 of those 13 contests, the games produced five or fewer goals. The Predators can only stay competitive if this game is low-scoring, and they have different strategies to limit the Lightning’s opportunities.

Nashville likes to have its wings sink so that five players are packed into a small space defending below the circles. That means we are going to see a lot of play from the Lightning skaters above the circles, as they try to find avenues to bypass a slot stacked with bodies.

One more development could comfortably secure this bet as an under. On Thursday night, two big injuries occurred. The headliner is that the Lightning's leading scorer, Steven Stamkos, left the game against the Columbus Blue Jackets with an undisclosed injury. Perhaps more significantly, Predators forward Eeli Tolvanen didn’t play against the Detroit Red Wings because of a lower-body injury. Tolvanen can, and has, been bombing shots, especially from the flank on the power play. Vasilevskiy is great, but Tolvanen has the type of shot that could beat him. If he doesn’t play, Nashville will be angling for a 1-0 victory.

We are a month into the Darryl Sutter experiment, and it isn’t going well. Calgary has lost eight of its last nine. Almost impossibly, all of those losses have come in regulation! The Flames’ free fall now has them trailing the Vancouver Canucks in the standings, ensuring that come mid-May, they will be golfing, not playing hockey.

Sutter pledged that he would get Calgary to play faster, but he also was enjoined to instill consistency and stability the Sutter way. Translation: More dump-and-chase and less freewheeling. The result: In a tortured manner, Sutter’s defence-first algorithm has materialized.

Expected goals against per 60 minutes have dropped from 2.11 to 1.98 since Sutter took the helm. High-danger chances against per hour have fallen from 10.09 to 8.96. But there has been a trade-off, which is the evaporation of offence. During that nine-game stretch where Calgary has gone 1-8, they have scored three or more goals only twice.

And yet, the Flames have had five days off thanks to their games against Vancouver getting postponed. Calgary will be at home, where they have had more success, and against an Edmonton Oilers team playing their third game in four nights.

The Oilers are 7-1-2 in their last 10 games, which suggests they are playing exemplary hockey. But suspicion is warranted. In the Oilers’ last 10 games, only the Minnesota Wild have a worst expected goals percentage. In high-danger chances, the Oilers are last in the NHL by a wide margin. Essentially, their high-danger chances have dried up, and compounding that issue is the mysterious injury to Ryan Nugent-Hopkins, who didn’t play Thursday night.

The Oilers are currently playing Connor McDavid and Leon Drasaitl on one line, and together they make beautiful music, with the Oilers registering three times as many goals as they have surrendered when they are on the ice together at 5-on-5. But concentrating the elite talent has its costs, and the Oilers lines without those two are -14 in goal differential. In high-danger chances, they are a 42.68 per cent when those two are not on the ice. Ergo, if the Flames can survive the McDavid and Drasaitl duo, they can win a low-scoring game.

I believe that with lots of rest and time for preparation, in addition to being at home, Sutter and co. will avoid a five-game losing streak and get back in the win column. At -103, it isn’t the sexiest underdog pick, but if it lands, it will satisfy.