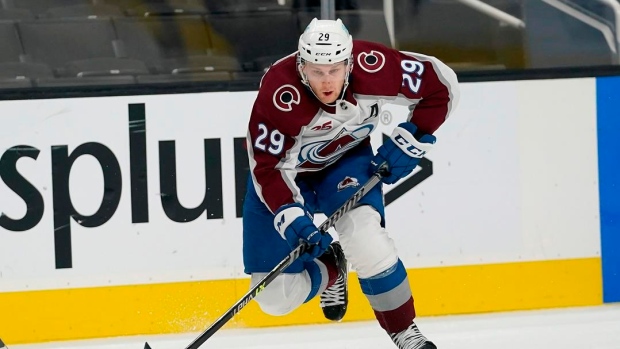 As we wade deeper into the postseason and the number of remaining games decreases, it is time to dive headfirst into prop bets. With fickle team performances and murky injury reports, moneyline bets can be difficult to project. However, looking at individuals and their attendant prop bets can be lucrative, especially because a player’s value in the marketplace can be skewed. With the NHL staying on brand by giving us a wacky weekend schedule, I present one game bet and two player prop bets.

Colorado Avalanche at St. Louis Blues
Saturday, May 21 – 8:00 PM ET
The difference between the two numbers is staggering. In Game 1, the Colorado Avalanche finished with a 5-on-5 expected goals for of 3.73, a number that elicits the fireworks emoji. In Game 2, their expected goals for fell down an elevator shaft to a measly 0.95. The same trend is true for other metrics. The Avalanche generated 16 high-danger chances in Game 1. In Game 2, they manufactured three. Did the Blues figure the Avalanche out?

Game 1 was a disaster for St. Louis, and the fact that the contest went into overtime seems a borderline miracle. In Game 1, the Avs were allowed to let their creativity run wild, incorporating set plays all over the ice to great effect. The Blues conceded wide swathes of ice to the Avalanche, who used the stretch pass to quickly advance the puck up the ice.

In Game 1, the Avs’ defencemen were critical to their success. The Colorado rearguards carried the puck in on the entry, spearheading a layered rush attack; on the cycle, the Avs’ defencemen created confusion by interchanging with the forwards and sliding down low. The speed and offensive skills of Colorado’s blueliners stretched St. Louis out, opening up the slot.

The playoffs are about adjustments, and the Blues certainly came prepared. In Game 2, instead of surrendering space, St. Louis stepped up and halted Colorado’s momentum on zone exits and in transition. The Blues’ defencemen held the blue line and were confrontational in the neutral zone, an area where they got destroyed in Game 1.

Puck management is a dry hockey term that belies its import. In Game 1, the Blues’ puck management earned a failing grade. In Game 2, the Blues were more attentive, allowing them to play far more in the area where they believe they can win this series: the bottom half of the offensive zone. The Blues’ opportunities were few and far between in Game 1, but one constant in this series has been St. Louis’s ability to create chances off the low cycle.

Three things that occurred in Game 2 make me optimistic for a Colorado bounce-back Saturday. First, the Avalanche have held tight gaps all series. Their forwards have provided strong backpressure, and their defenceman have not allowed St. Louis to gain speed off the rush, eliminating a big part of the Blues’ attack.

Second, the Avalanche were retrieving pucks on dump-ins and shot attempts, but they got tripped up by failing to capitalize off the offensive zone time. All night Colorado struggled with its execution. The Avs struggled to receive passes cleanly. They made bad decisions. Throughout the playoffs the Avalanche have been in rhythm; on Thursday night, they were off-key.

Finally, in the defensive zone, the Blues made a habit of double-teaming the Avs’ puck-carrier when the Colorado puck-carrier was in a non-scoring area. That might work when the Avalanche are off their game, but if they are passing the puck better, they are going to find the open man by passing out of the overload. In Game 2, Erik Johnson did so once, and it resulted in a penalty by Brayden Schenn on J.T. Compher.

The Blues were an excellent home team all season, but the line-matching advantage normally afforded by playing in one’s own barn doesn’t quite have the same punch in this series. Avalanche coach Jared Bednar is leaning into Nathan MacKinnon going head-to-head against Ryan O’Reilly and Colton Parayko.

I think Colorado will execute better in Game 3, and that will open up the attack for its defencemen. I also expect that cleaner execution will help the Avs when they draw the Blues to the point. With the series at 1-1, I like taking the team I think will win the series -- and with odds that are more digestible since Colorado is on the road.

Colorado Avalanche at St. Louis Blues
Saturday, May 21 – 8:00 PM ET
Is Ryan O’Reilly solving Nathan MacKinnon? In Game 2, MacKinnon notched only three shots. Until Thursday night, six shots had been the lowest shot total MacKinnon had recorded in the postseason. True, the bulk of MacKinnon’s playoff sample size has been against the Nashville Predators, a team that had no answer for his speed and power, but in Game 1 against the Blues, MacKinnon posted eight shots.

In Game 3, I suspect MacKinnon eclipses 4.5 shots because he takes a more direct approach. Translation? For example, at the end of period 1 in Game 2, MacKinnon used a give-and-go to rev up his engine and speed into the offensive zone for a rush chance against Nick Leddy. But instead of pushing Leddy back into the middle slot and whipping a shot on goal (maybe even by using Leddy as a screen), MacKinnon opted to try a spin-o-rama on his backhand that missed the net.

Between MacKinnon’s bad dump-in that led to Kyrou’s goal and fumbling the puck on entries, he just wasn’t himself with the puck. I think after being held goalless in two straight games, and mustering only a second assist in Game 2, MacKinnon turns up the dial on shot volume.

While MacKinnon was contained in Game 2, that is a relative term because he did get looks. He had an opportunity in the low slot that was stopped by Calle Rosen’s active stick. There was the setup by Mikko Rantanen on the rush that led to the phantom hooking penalty on St. Louis, giving the Avalanche their sole goal.

MacKinnon acknowledged that his team was “really bad” in Game 2. As the Avs’ top shot-creator, I think he will be whistling shots at Binnington from the drop of the puck. Among forwards with more than two games logged this postseason, no one is putting more rubber on net at a higher clip at 5-on-5 than MacKinnon. While 4.5 is a very high number of shots for an over, we could be looking at MacKinnon hitting it by the second period.

Florida Panthers at Tampa Bay Lightning
Sunday, May 22 – 1:30 PM ET
The sentiment that the Florida Panthers are soft and their tremendous success during the regular season wouldn’t be conducive to playoff hockey is starting to reverberate. And the personification of this stark dichotomy between regular-season sizzle and playoff listlessness is left wing Jonathan Huberdeau.

Two games into the Lightning series, Huberdeau has generated as many 5-on-5 shots as Ryan Lomberg, with two. In terms of individual expected goals, he ranks 8th among forwards on Florida. Huberdeau has been given very favourable zone starts, yet he ranks among the worst on the team in expected goals percentage.

The Tampa Bay Lightning are playing a grinding game with very tight gaps and Huberdeau has wilted. He is always looking to fly the zone, and in open ice, he has struggled to gain separation. With the puck, his decision-making has been slow, especially when releasing shots. Maybe the most salient statistic is that, in two games, he has generated zero rush attempts at all strengths.

Huberdeau’s troubles haven’t just been against Tampa Bay. Against Washington in the first series, he finished with three high-danger chances and two points at 5-on-5. Brandon Montour, a defenceman, had two of both.

Compounding these difficulties, Huberdeau faces Lightning goaltender Andrei Vasilevskiy, who has submitted an outrageous 4.31 Goals Saved Above Expected (GSAx) in the second round. With the Florida Panthers’ power play broken and Huberdeau offering lackluster 5-on-5 play, a multi-point game for him seems far-fetched.

Having scored only two goals in two games, the Panthers may be on the verge of an offensive explosion. But Huberdeau’s point-total line being listed as 1.5 instead of 0.5 is a vestige of his regular-season output. In the postseason, he’s been far less influential.