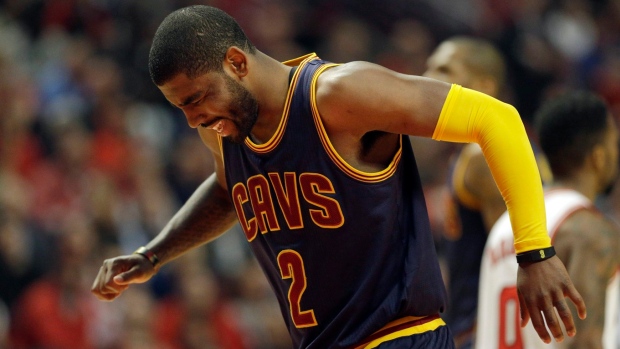 CLEVELAND - Kyrie Irving is getting on a plane with the Cavaliers. His next trip could be onto the floor.

The All-Star point guard, who hasn't played since breaking his left kneecap in Game 1 of last season's NBA Finals, could make his much-anticipated 2015-16 debut in the next few days.

Coach David Blatt said Thursday that Irving — and starting guard Iman Shumpert, who has been out with a right wrist injury — will travel with the team and may play either Friday in Orlando or Tuesday in Boston.

"There's a chance that one of the two or both will play on the trip, but there's also a chance they don't," Blatt said following practice at Cleveland Clinic Courts. "We'll see how they're feeling."

Irving and Shumpert both made it through their third full practices Thursday and will accompany the team on the two-game swing. Blatt stressed the team will stay cautious. Cleveland's eyeing a return to the finals and the Cavs don't want to unnecessarily rush back two of their best players.

"We're in December," Blatt said. "Not a normal situation. Both of them are coming back from pretty serious injuries, but they are progressing."

Irving played in a career-high 75 games last season before getting hurt while making a move in the finals against the Golden State Warriors, who defeated the Cavs in six games to win the title.

Cleveland leads the Eastern Conference with a 14-7 record, quite an accomplishment considering the Cavs have been without two starters since the opener. Once Irving and Shumpert return, Cleveland will be as healthy as it has been since the beginning of last spring's playoffs.

Irving will give the Cavs another playmaker and scorer while Shumpert provides them with a perimeter defender who can match up with the opponent's best wing player.

"They give us a real boost, a real shot in the arm because of their particular skills and what they bring to the table for us," Blatt said.

With Shumpert out, J.R. Smith has been starting alongside Mo Williams. Blatt said he has yet to decide if Shumpert will return to the starting lineup.

Whenever Irving and Shumpert return, Blatt promised to ease them back before increasing their minutes to normal levels.

"I'd like to see them be able to come and play significant minutes or at least minutes that give them the chance to feel the court long enough to contribute or get something out of it," Blatt said. "I'm not going to throw them out there for 48 minutes. We'll have to see how they're feeling and get them conditioned to game speed."

This story has been corrected to show that Irving was injured in Game 1.