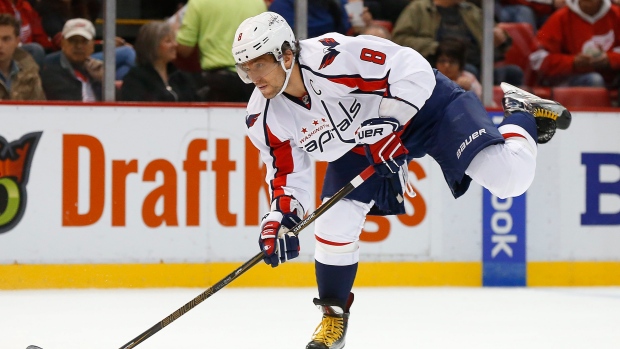 On Sunday night, Alexander Ovechkin scored career goals 500 and 501 against the Ottawa in most fitting fashion. His milestone marker came on the power play from the right dot, and his icing-on-the-cake goal was a coast-to-coast rush, seemingly blowing by the entire Senators roster.

There was, of course, a big celebration. Scoring 500 goals in today’s landscape is excruciatingly difficult, and yet Ovechkin did it with relative ease. You can reasonably make the argument that he’s the only player seemingly unaffected by the realities of the NHL’s goaltender boom – one that’s reduced goal-scoring over the years in rapid fashion.

It’s one of the big reasons why I feel, despite being this generation’s finest goal-scorer, he’s likely still underrated. I think this largely stems from the fact that goal-scorers of yesteryear posted the gaudiest of offensive numbers. Of course, none of those players were challenged by the calibre of goaltending talent that Ovechkin has faced since entering the league in the 2005-06 season.

So, how do we go about measuring an Ovechkin against the likes of Wayne Gretzky, Gordie Howe, Mario Lemieux, Jaromir Jagr, Mike Bossy and Bret Hull? The quickest way to get there is to simply look at how every goal-scorer performed relative to his peers over his career. Essentially, we take the raw goal numbers produced by each player and adjust them to make a fair apples-to-apples comparison. The alternative – comparing raw numbers to raw numbers – just simply doesn’t work, since the sport has changed so much in a matter of two decades.

I do enjoy the swing Hockey Reference has taken at this over the years, accounting for things like goaltending talent (and the associated impact on goal-scoring), schedule length, roster sizes, et al. We’ll follow something very similar for the purposes of looking at (a) where Ovechkin grades out right now as a scorer; and (b) where he may finish as a scorer, the idea to treat every goal-scorer’s season through the prism of a league where you see about six goals per game.

Here’s our first look at the league’s best numbers by adjusted criteria. On the horizontal axis are total adjusted goals, which capture volume. On the vertical axis are goals per game, which capture efficiency. No surprises which names pop here. 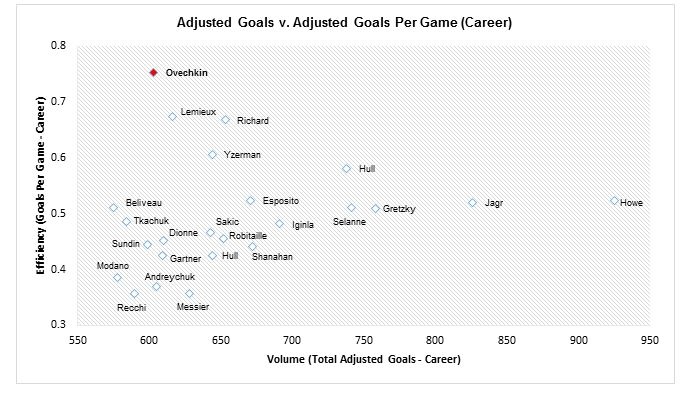 Ovechkin gets nearly a 100-goal bump due to the sheer difficulty of the scoring environment he plays in, placing him inside of the top-20 goal-scorers in the history of the game. Considering his age (30), I think it’s fair to start shifting the discussion from “How good is Alex Ovechkin?” to “Is Alex Ovechkin the best goal-scorer of all-time?”

Now, if you simply extrapolated Ovechkin’s lethal goals-per-game rate over the next seven seasons, he’d be a lock to end with the most adjusted goals of all time. But, that’s a bit specious. After all, Ovechkin’s best seasons are almost certainly behind him. The goals-per-game rates you see above for all players excluding Ovechkin are career rates, remember – they capture the tail years of a scorer’s career, where they are historically less productive.

Here’s what we can do, though. We can look at historical adjusted goals-per-game rates for these elite players in their tail years (age 31+) and apply those rates to Ovechkin going forward. It’ll give us a decent shot to guess where Ovechkin finishes relative to his peers.

We do need to make a couple of additional assumptions. We need to assume that Ovechkin’s going to play a number of seasons going forward, and will be relatively healthy in those seasons. I don’t think those are unfair expectations – he’s been maybe the league’s most durable player and, at the rate he’s currently playing, it seems as though he’s got a number of seasons ahead of him. Let’s call it at seven more reasonably healthy seasons, putting him at age 37. 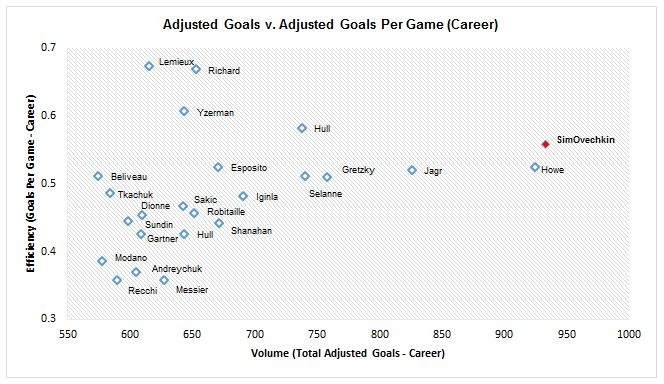 So, there you have it. So long as Ovechkin plays about seven more healthy seasons and continues to score at a rate that we have regularly observed from other elite goal-scorers in their 31+ years, there’s reason to believe he’ll end up as the most prolific goal-scorer in the history of the game, passing Gordie Howe on the adjusted goals front about six or seven seasons from now.

I’m fascinated to see what happens to Ovechkin’s goals-per-game rate. His current rate is insanely productive. But using the slide his comparables saw, he dips to about fifth all-time in goals-per-game. But, if you believe Oveckhin’s truly the best goal-scorer we have ever seen, then all of these comparables are understating what he’ll do going forward. If you believe that, it’s possible he could score more than we anticipate.

Also, I'm curious to see how close Ovechkin gets to the likes of Gretzky (894), Howe (801), and Hull (741) in the actual raw/unadjusted goal race. At 501, he's got an almost impossible hill to climb here. But, he should be able to push his way comfortably into the top-ten ahead of guys like Mark Messier, Steve Yzerman, and Lemieux.

Alex Ovechkin seems miles away from the likes of Gretzky, Howe, and Hull in the goal-scoring race. But that’s because they played in different eras – the former in one where virtually no one around the league can find the back of the net. When you factor in how the sport has progressed over the years, Ovechkin’s goal-scoring numbers are instantly more impressive. Maybe the most impressive we have ever seen.