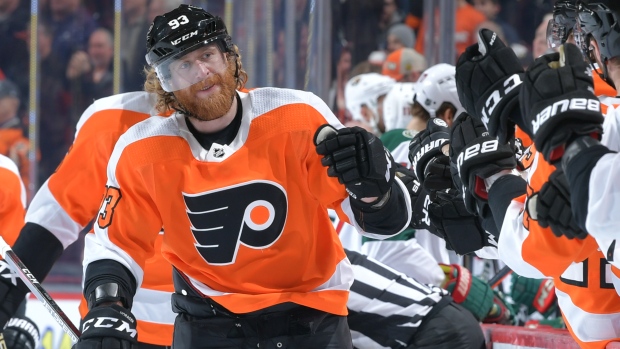 Now that the NHL off-season is truly here – my apologies to the lingering free agents who will likely find a new home in the coming days – we can start to tackle some of the strategic topics we’ve had in the queue for some time. Up first is the evolution of the modern-day power play from a personnel perspective.

Though most hockey fans are at least vaguely aware of the shift in power play strategy, it is worth reiterating here. Since the 2015-16 season, we have started to see teams more frequently deploy a four-forward lineup. The traditional three-forward setups haven’t been abandoned, but they have become less popular across the league.

There is a simple reason for this shift: four-forward power play units generate more net goals per 60 minutes than their traditional three-forward counterparts. While those units will give up marginally more goals, their offensive production greatly outweighs real or perceived defensive limitations.

I liken the four-forward power play setups to similar shifts in coaching strategy, like an increased propensity in pulling goaltenders more aggressively when trailing late. The math supported the change, and as a few teams started to incorporate the philosophical shift the results were compelling and obvious.

Back to the power play setups for a minute. There is an awful lot of context as to why teams have enveloped the fourth forward, but at a high level it’s really about having more capable offensive shooting talent in those premium scoring minutes. This, I think, raises another question: Why have we stopped at utilizing just four forwards? Is it possible that a five-forward power play makes sense in certain spots, especially on teams that may be (a) heavy on offensive forward talent; and/or (b) light on capable offensive defencemen?

While a five-forward power play sounds like a unicorn against a traditional four-man penalty kill, we have seen spots where coaches have experimented.

Just last season, the Philadelphia Flyers tried out a five-man unit in a game against the Minnesota Wild. The New York Rangers, Tampa Bay Lightning and Florida Panthers also tried it in spots. Sadly, we have only seen it in very limited quantities over the years (and yes, that’s years – there are great examples of teams from two decades ago trying these setups out, usually out of desperation), which makes it very hard to test its feasibility.

We do have access to some underlying data points that might suggest it’s worth experimenting with. Consider: the shift from three forwards to four forwards saw a spike in shot volume of about 12 per cent and an increase in shooting percentage by about 13 per cent. Even when controlling for the drop in team save percentage, four-forward lineups generate about 1.4 net goals more than their three-forward counterparts do.

Then, start considering what we are seeing in other game states. At even strength, a significant portion of the increase in goal scoring can be tied to forwards converting on a higher percentage of their opportunities, whereas defenders – impeded by natural shooting talent, distance from the net and other factors – haven’t seen a change in their conversion rates for over a decade.

We also have indications of which teams may be in a talent surplus position amongst forwards, or talent deficient amongst defenders. Consider the below table, which shows every team’s regular power play skaters from the 2018-19 season. The table shows all players at or above replacement level based on their individual contributions to their team’s power play performance in the given year. 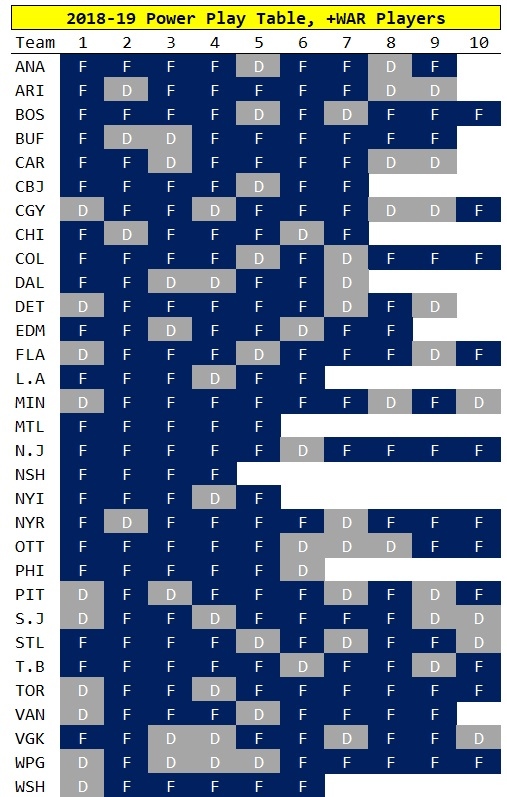 Let's focus on that latter group for a moment. What do these teams share? The Devils were the most successful of the bunch on the power play, finishing 21st overall (18 per cent). Every other team there finished between 27th and 31st on the man advantage. So not only do they have an obvious skew in contributions from a positional view, they also have an operational need to consider change. The defenders on those respective teams could be victimized by something out of their control (e.g. a coach’s preferred power play structure, or talent limitations across the roster), so I pause at apportioning a respective team’s struggles on the power play to one or more defensive players.

At the end of the day, I still think we are a ways off from seeing a five-forward power play become something of a regular occurrence in the NHL. Even a team like New Jersey – where there was a massive positional skew in performance last season – seems unlikely to shift, particularly with the addition of a defender like P.K. Subban this summer.

But it tends to take just one team to upset the apple cart, and those decisions are frequently borne from poor prior performance adhering to the status quo. At best we would be making an educated guess as to what a five-forward lineup could do for a team on both ends of the ice.

But when you are converting on only 13 or 14 per cent of your opportunities in the current construct – well, perhaps the risk is worth further exploration.