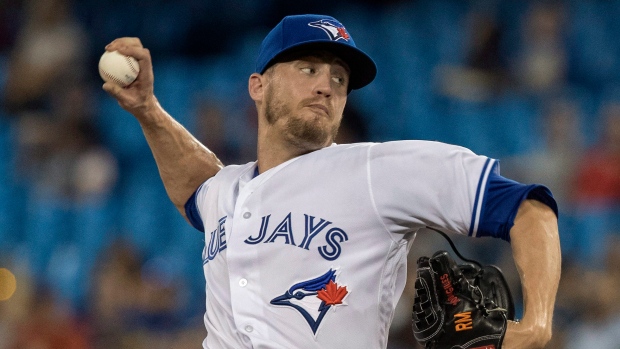 One of the more attractive bullpen options on the market, a mysterious elbow injury and a surprise flight to Dallas for an MRI a day before the deadline ended up scrapping those plans.

Now, in the middle of a pandemic with a 60-game season that’s sure to produce a handful of on-field surprises ahead of the scheduled Aug. 31 trade deadline, Giles’ name is once again going to come up a lot over the next six weeks.

A potential trade isn’t on the 29-year-old closer’s mind at this point, but the contract extension Giles was hoping for last year has not come to fruition and he’s now mere months away from free agency.

“Nothing has changed right now,” Giles said Wednesday. “If those talks do ever happen, I’m all ears, but we’re focused on other things right now. I’m just focused on this season right now.

“Once the season’s rolling, everything will fall into place on its own,” he added. “I’m in a good place right now. I’ll have a little bit of a chip on my shoulder. Everybody’s got to have somewhat of a chip on their shoulder. I fought hard last year dealing with some stuff but now I’m ready to prove it was just a one-time thing, just go out there and do what I do best.”

Despite the off and on elbow problem that started midway through last season, Giles was terrific when he was on the mound.

For a 95-loss team he closed out 23 games, finishing with a sparkling 1.87 ERA and a whopping 83 strikeouts across 53 innings.

Amongst 158 qualified relievers, Giles was the 10th most valuable at 1.8 fWAR, just ahead of the man sent the other way to Houston in the 2018 trade, Roberto Osuna, who saved 38 games and was worth 1.6 fWAR.

It’s a trade that has worked out about as well as the Blue Jays could’ve hoped considering the circumstances.

As of today, Giles is a still a Blue Jay and manager Charlie Montoyo knows the value of having an elite ninth inning option, making his job a whole lot easier on days he knows the fiery right-hander is available.

“I guess you can ask Joe Torre about that, too,” Montoyo joked. “Having a guy like Mariano (Rivera), Giles has been as good for us. I’m talking about one of the best pitchers (ever), that’s not my point. The point is, as a manager, having a closer that when you have a lead you have a pretty good chance to win, that makes any manager’s life better.”

You can easily make the case Giles should still be a trade chip for the Jays given the volatility of relievers and the demand he could create next month.

However, it’s uncertain what type of package a contender would even be willing to give up given the fact COVID-19 could wipe out the season before that team would get to use Giles in the postseason.

But you can also make the case in these uncertain times that an extension could come at a bargain, depending how badly Giles wants to stay in Toronto, something he’s mentioned on numerous occasions.

The extreme uncertainty surrounding this winter’s free-agent market could benefit the Jays if they’re interested in opening the Rogers pocketbook to keep Giles around.

Unlike last year, Montoyo does have some other intriguing options with closing experience at the back end of his bullpen.

“If we don’t have him, this year we have choices that have done that job before,” Montoyo said. “Bass did it in Seattle. Dolis did it in Japan. Romano has been pitching really good. That’s the difference between last year and this year. When Giles isn’t going to be available for that night, we have other choices.”

Bass closed out five games for the Seattle Mariners in 2019, while Dolis earned 96 saves over four years in Japan.

Even Giles has been impressed with Dolis’ splitter, a pitch used regularly in Japan but not as much stateside in recent years.

“His stuff is just electric,” Giles said. “It’s stuff that I haven’t seen in a long time and I think it’s going to be a great tool for our team to have somebody like that in the back end of our bullpen or even earlier in the game. He’s one of those guys that has multiple weapons and he’s a very valuable person to have.”

Romano, who hit 98 mph on the Jays’ private radar gun and struck out the side during his intrasquad outing Wednesday, has been turning heads since February and is feeling comfortable after a 17-appearance debut last season produced a 7.63 ERA.

“That means a lot to me,” Romano said about the talk from his coaching staff that he could be a late-inning option. “Last year definitely didn’t go how I wanted and I kind of used it as fuel. I’m just happy they’re seeing the hard work I’ve put in.”

This bullpen has a much different feel at the back end, something that will give Montoyo and pitching coach Pete Walker some swing-and-miss options late in games.

“We do have some power,” Walker said. “Compared to years past, we have some real power coming out of that ‘pen.”

The biggest question is whether Giles will still be included in that mix come September.​