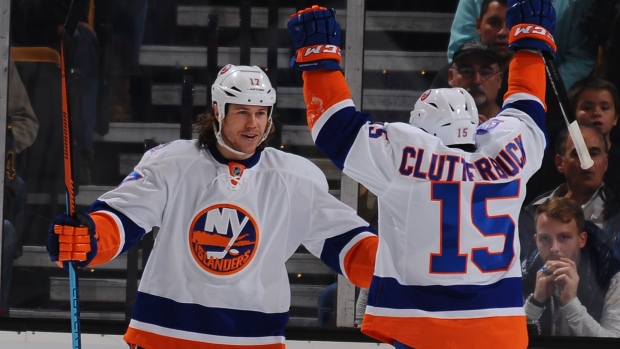 BOSTON - The Boston Bruins lost the game to the New York Islanders 3-2 and then waited to find out how long they will be without their captain and No. 1 defenceman, Zdeno Chara.

The 2009 Norris Trophy winner left Thursday night's game in the first period with an undisclosed injury and didn't return. Coach Claude Julien said after the game he had no update, but inside the Boston locker room, Chara's teammates seemed resigned to a long absence.

"He's a presence in all aspects of the game," said Bruins forward Chris Kelly, who scored to cut a two-goal deficit in half midway through the third period. "He's a captain for a reason. He's played in 1,000 games. We're going to miss him."

Milan Lucic added goals for Boston. Niklas Svedberg, making his third start as Vezina Trophy-winner Tuukka Rask got the night off, made 35 saves.

The Bruins played the Canadian national anthem and observed a moment of silence in memory of the soldier who was killed at the war memorial in Ottawa on Wednesday.

The team also played a highlight video for former Bruins defenceman Johnny Boychuk, a member of the 2011 Stanley Cup champion team who was traded to the Islanders on the eve of the season. He belatedly realized the cheering was for him, flashed a smile, and finally took off his glove and waved to the crowd.

"I think both those guys were excited to come back," Clutterbuck said. "Obviously, they loved their time here and you can kind of feel the love for Johnny Boychuk out there."

Chara collided with Islanders captain John Tavares midway through the first, then played one more shift that ended with 8:04 remaining in the period. There was no outward indication of an injury at that time.

The team didn't elaborate on why Chara didn't return to the bench at the start of the second period except to confirm that it was an injury. The 6-foot-9 Slovakian, a third-round pick of the Islanders in 1996, spends more time on the ice than any other Bruins player.

"He's not just big in stature; he's a leader out there," fellow Bruins defenceman Dennis Seidenberg said. "He takes up a lot of space in the defensive zone. He's the biggest part of this team."

Julien said he wouldn't have an update until doctors have a chance to look at Chara.

"When you lose your captain and one of your better defencemen, there's no doubt it's going to have an effect on your team," the coach said. "You're going to lose guys during the season; those things happen. How you react to it and how you respond is what's important."

The Islanders had a goal waved off in the first few minutes for goalie interference, but that barely slowed them down. They made it 1-0 six minutes into the game when Nielsen got to a puck in the crease and made a one-handed reach with his stick to tip it in.

Lucic crashed the net for his first goal of the season to make it 1-1 near the end of the first, then Okposo made it 2-1 just 90 seconds into the second period.

Clutterbuck gave New York a 3-1 lead midway through the second before the Bruins mounted sustained pressure in the Islanders' zone in the third and cut the deficit to one on Kelly's rebound with 10:11 remaining.

NOTES: Tavares entered the night tied for the NHL scoring lead with three goals and seven assists. ... The Islanders are 4-1 against the Bruins in their last five games. ... Seth Griffith assisted on Lucic's goal one game after earning his first NHL point with a goal against San Jose. ... Islanders LW Josh Bailey left the game with a hand injury after the second period and didn't return.