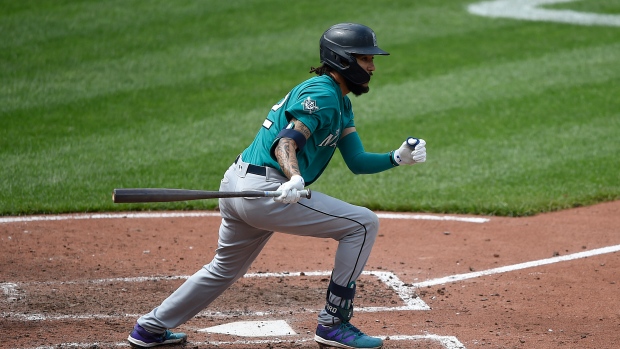 BALTIMORE — Mitch Haniger became the first Seattle player to homer out of the leadoff spot in both ends of a doubleheader, hitting a tiebreaking drive in the second game that led the Mariners over the Baltimore Orioles 2-1 Thursday for a sweep.

Haniger’s fifth-inning homer to left-centre off Bruce Zimmermann (1-1) broke a 1-all tie and gave him four home runs this season.

J.P. Crawford hit a tiebreaking, two-run double in the sixth inning that lifted Seattle to a 4-2 win in the opener --- a fitting score for Jackie Robinson Day.

Seattle won three of four from Baltimore and went 5-2 on a trip that included a stop in Minnesota.

The Orioles, who managed just seven hits in the two games, have lost eight of 10 following an opening three-game sweep at Boston. Baltimore was 1-6 during its homestand against the Red Sox and Mariners.

“I do believe our offence is a lot better than how we’re swinging the bat right now, and we are going to turn it around,” Baltimore manager Brandon Hyde said.

Justin Dunn (1-0) allowed two hits in the second game, including Freddy Galvis’ homer. He struck out six and walked two in five innings, a huge improvement from his first start, when he walked eight against the Chicago White Sox on April 7.

“Everything today was ‘Here, just hit it,’” Dunn said. “0-0, 0-1, I was going to give you one to hit, get ahead and let myself play. I knew if I could get ahead and expand later, I’d have some success. I honestly didn’t have put-away breaking balls today until later in the game. Fortunate with the results and just have to keep building off it.”

Keynan Middleton pitched the seventh for his second save in as many attempts, finishing a three-hitter in a game shortened by pandemic rules.

Dylan Moore’s solo shot in the third and Haniger’s homer accounted for all of Seattle’s offence against Zimmermann, who yielded six hits and struck out two in five innings.

“He likes hitting in this ballpark, and it certainly showed up in this series,” Servais said.

The teams played their second doubleheader in three days to make up of Wednesday’s rainout, which followed a split Tuesday that made up Monday’s postponement.

All players wore No. 42 in the first game on Jackie Robinson Day, the 74th anniversary of Robinson breaking the major league colour barrier with the Brooklyn Dodgers.

In the first game, Crawford stayed back on a slider and hooked the ball down the right-field line for a go-ahead two-run double off Tanner Scott (0-2).

Marco Gonzales (1-1) yielded Trey Mancini’s two-run homer in the first, but settled down to retire 13 of his last 14 batters. He gave up two runs and three hits in five innings while striking out five. Kendall Graveman pitched a perfect seventh for his second save to cap a four-hitter.

Orioles: Hyde said the test results on RHP Mac Sceroler (shoulder tendinitis) were encouraging. Sceroler was placed on the IL Wednesday. “We’re hoping it’s not going to be too long,” Hyde said.

Mariners: LHP Yusei Kikuchi (0-0, 3.75 ERA) has 16 strikeouts in 12 innings for Seattle, which returns home to begin a three-game series against Houston on Friday.