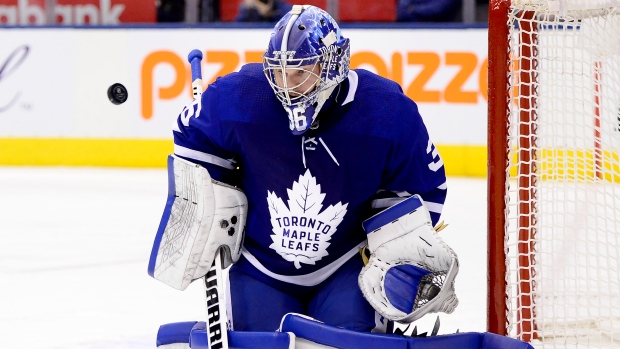 Jack Campbell will often tap the pad of the nearest teammate after he freezes the puck.

"They always tell me, 'Good job,' so it's kind of like (me saying), 'Good job,'' the goalie explained. "It kind of makes you interact with your teammates a little more. Being in the net, you're not on the bench so you can't really chat it up with the boys."

Jack Campbell makes an effort to give his defencemen a tap after every whistle. Protect him. pic.twitter.com/Q9OiFPo5Ne

"Just loves the boys, honestly," centre Auston Matthews said of Campbell. "Just really easygoing, just wants to compete out there and have fun and be in the locker room and his quote the other day was pretty special. He wants to show us how supportive he is."

Campbell gets another chance tonight in Ottawa. Frederik Andersen, who just returned from a 10-day layoff, will start Sunday night in Buffalo. Andersen allowed three goals on 19 shots in a loss to Dallas on Thursday.

"We just thought that given Fred's coming off the injury and everything it just gives him an extra day here," coach Sheldon Keefe explained. "We haven't practised much as a team."

But the fact Campbell is 2-0-1 with a .918 save percentage since coming over from Los Angeles certainly factored into the decision.

"Also, it's a little bit less time off for Jack," Keefe acknowledged. "He's found some real consistency playing three games for us so (good to) get him back in today as opposed to having to wait another day."

Campbell credits his new teammates for getting him a win in his first start against the Ducks even though he allowed four goals on 30 shots. That victory on Feb. 7 allowed Campbell to build some momentum and ride a wave of adrenaline.

"It's an honour to be here," he said with a smile that hasn't seemed to leave his face since he landed with the Leafs. "The biggest thing that stands out was the first game against Anaheim, you know, little critical of myself, but the boys picked me up and came out and scored some big goals. That explosiveness was jaw-dropping and I'm excited to keep seeing it."

Campbell's positive demeanour has long been a hallmark of his game.

"Jack is one of the most hardworking kids and maybe, I tell people this all the time, nicest human beings I have ever coached," said Senators bench boss D.J. Smith, who had Campbell in Windsor during their OHL days. "Generally, just a really nice guy."

​So, it's no surprise that the 28-year-old received Toronto's player-of-the-game basketball on Tuesday night after turning aside 35 of 37 shots in an overtime win against the Coyotes. He dribbled the ball between his pads much to the delight of his teammates.

"Actually, I know you didn't get a great look there with my chest protector on, but I mean I can play a little bit," he insisted. "I've always liked LeBron and I followed him a lot so I have his shoes and when I put those on, watch out!"

Campbell used to let the pressure get to him early in his career. It's a big reason why he struggled to stick in the NHL despite being a first-round pick and World Junior success story.

"He's really matured as a player," said winger Kyle Clifford, who spent the last four seasons with Campbell in Los Angeles, "and just the confidence he has in himself (has grown)​."

Campbell faces another challenge tonight as the Michigan native gets his first taste of the Leafs-Senators rivalry.

"I'm just really excited," he said, "kind of at a loss for words, just ready to go."

This is the third installment of the Battle of Ontario this season, but the first one in Ottawa where Smith will have the last change. And he'll use that advantage to get Nikita Zaitsev out against Matthews as much as possible.

"He's been great," Smith said of the ex-Leaf. "I don't know if he let Taylor Hall in more than a couple times the other night. His feet are the best of anyone on our back end, defensively anyways, backwards skating, his gaps are really good, he doesn't give you much time, he plays you hard in the D-zone. He's a guy you want to put against the best players. He'll be seeing every shift against Matthews tonight and he's going to do everything he can to keep the puck out of the net."

"We have to make our gaps tighter than last game," Zaitsev said in reference to Toronto's possession-based system. "We'll be ready."

The Russian defenceman played just under seven minutes against Matthews in five-on-five action in the last meeting between the teams on Feb. 1. Shot attempts favoured the Leafs in those minutes 10-5, but Matthews was held without a point before assisting on the OT winner on the power play.

"Zaits competes hard," Matthews said. "He's a guy who likes to battle and enjoys playing his role and in that kind of environment. We had him for three years and each and every practice (he was) a guy who competes really hard and likes to play tough."

Matthews memorably launched his NHL career with a four-goal night in Ottawa and has continued his domination over the years with 12 goals and eight assists in 14 games against the Senators. Zaitsev, meanwhile, doesn't have pleasant memories of this rivalry, especially the games in Ottawa.

"For me, it was one of the toughest buildings to play," Zaitsev recalled. "I don't know why, but I think I was minus-six here in my career. Like, it was terrible for me."

It's going to be an emotional night for Keefe, who is experiencing a bit of a homecoming.

Keefe started his coaching career with the Central Canada Hockey League​'s Pembroke Lumber Kings just 150 kilometres down the road from Ottawa. The 39-year-old has arranged to bring a big group from Pemb​roke to watch tonight's game from a suite. And Keefe has put some time aside before puck drop to go up and share a moment with his old friends.

"The number of volunteers and supporters that we had, sponsors, fans, all these things that allowed that organization to support me in my endeavour to try to be a coach and start a new life and all those types of things, today is an opportunity for me to thank them and have them in the building and it's something I've always wanted to do if I ever had a chance to coach in the NHL," Keefe said. "I wanted to make sure I could go out of my way to acknowledge them."

Keefe has made it a point to start players when they visit their hometowns or play a former team so you better believe Toronto's dressing room is aware that this is a big night for the man behind the bench.

"This is an important game for him," said Jason Spezza. "We'd like to get him a win, because we know he's going to have a lot of people here tonight and it culminates him becoming an NHL coach, coming through here now as an NHL coach."

"They cld have squashed me. Instead they gave me a 2nd chance in life. I'll never forget."

-- On Sat. S. Keefe will host 40 ppl from Pembroke"who changed my life" to #leafsforever-#senators gm. The inside story on how they helped him reinvent himself.https://t.co/SZ72Nx8fu3 pic.twitter.com/wLKkAEyBBI

Spezza will be playing his first game as a Leaf in Ottawa where he spent the first 11 seasons of his career. The 36-year-old, much as he did on Feb. 1 ahead of his first Battle of Ontario game since changing sides, downplayed that storyline.

"Did I ever think it was going to happen, no," he said. "I didn't think after being in Ottawa for so long that I would play for the Leafs, but now I'm a Toronto Maple Leaf and it doesn't feel weird at all ... my time in Ottawa feels like a long time ago."

But Spezza's emotional connection with this city remains very much in tact and the former Senators captain is disappointed to see the franchise rank last in average attendance this season (12,050).

"I look at this as a strong hockey community with great fans and we filled the building every night when the teams were good and it's a little bit upsetting to see it like this and you're not sure what the reasons are or what's behind it," Spezza said. "Hopefully people can put everything aside and just come enjoy games. This is too good of a hockey city, you don’t want to put it in jeopardy where people think it's a bad market. You need full buildings for things to go well. I'd like to see the building here full again because it's such a strong hockey community."

With Andreas Johnsson out with a knee injury, Spezza has been reunited on the third line with Pierre Engvall and Kasperi Kapanen.

"We had a good run as a line for a little bit there when we were winning games and then different guys came back into the line-up so things got changed up, but we feel comfortable with each other," Spezza said. "Even last game, when we got put together for a bit, we had some good spurts. They are both great skaters and that complements my game and I try to get the puck and slow things down for them and I think we have a chance to be a good line."

Spezza scored a power-play goal against the Senators in Toronto's 2-1 win a couple weeks ago.