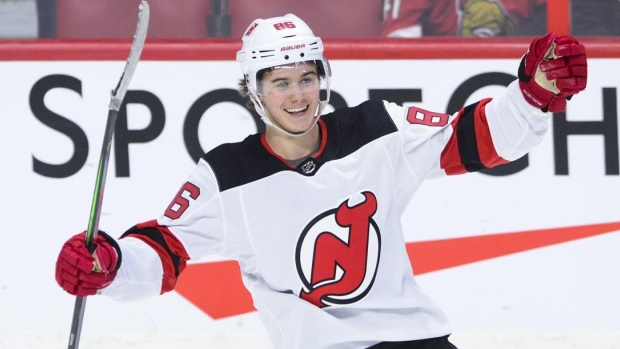 Jack Hughes already had a full plate coming into this season.

First overall pick, tons of hype, potential face of the New Jersey Devils for the next decade or more.

Things, however, haven't quite gone according to plan.

The 18-year-old went six games without a point to open his rookie campaign and has struggled to find the scoresheet ever since for a team that's been stuck in neutral most of 2019-20.

That's quite a six-week stretch for any professional athlete, let alone one trying to handle the weight of expectation from both the outside and within.

"It is what it is," Hughes said Tuesday as he tried to brush off the roller-coaster campaign. "It's a business — coach gets fired, GM gets fired, a lot of changes."

The youngest player in the NHL this season, Hughes has been used to putting up mammoth point totals at every other level. He's not the first young star to struggle early, but it doesn't make it any easier.

"That's obviously my game. I'm supposed to get points," said Hughes, tied for 10th in rookie scoring with six goals and 17 points in 38 games heading into Wednesday. "With where my game's at, the points haven't translated, (but I'm) creating a lot.

"There's a lot of season left."

Despite the rocky journey up to now, teammates have been impressed with how he's dealt with everything since June's draft.

"It's amazing, at 18, how demanding he is of himself," said veteran goalie Cory Schneider, who had Hughes living with him and his family this fall. "When you're accustomed to scoring three, four points a game your whole life and you come to the best league in the world, it just doesn't happen that way."

"He's handled it really well, just trying to work on other areas of his game and understanding the best players in the world are a point-per-game," Schneider added. "There's been some tumultuous moments for him. Losing a coach, losing a GM — the guy that drafted you, the guy that got to know your family.

It seems Shero's firing, which came out of the blue to those outside the organization, was the most difficult blow.

"It's tough," Hughes said. "He's a guy that brought me in. I have a lot of respect for Ray and think he's a great manager.

"It's not easy to be in his shoes," Nasreddine said. "You can see him getting more comfortable with the league. The experience really helps. The more games he plays, the more he realizes what he can and can't do on the ice."

A native of Orlando, Fla., and phenom with the U.S. National Team Development Program, Hughes spent most of his formative years living just outside Toronto when his father, Jim, was part of the Maple Leafs' front office.

He played at Scotiabank Arena for the first time Tuesday — Hughes was held pointless in a 7-4 loss to the Leafs — but the memories flowed back from his time wandering the halls as a kid.

"I came to so many games over the years," he said. "Definitely a game I had circled on my calendar."

Hughes is also proud of older brother Quinn, a 20-year-old rookie defenceman with the Vancouver Canucks set to compete in the NHL all-star game in St. Louis.

"It's not surprising to any of us."

And maybe, when everyone takes a step back, Jack's early struggles shouldn't be either.

Schneider said that while he isn't a fan of shootouts, he isn't sure extending 3-on-3 overtime beyond five minutes — which has gained some traction in recent weeks — is the right move either. "You've got to end the games, but 10 (minutes of OT is) a lot. You see teams now that have already played 10, 15 overtime games. Your top players are the guys playing most of those minutes." A member of the NHL's competition committee, Schneider added there could be "wiggle room" where the extra period might one day be seven minutes in length. "Playing another half period of 3-on-3, that's one-sixth of the game. That's a lot more hockey that adds up over the course of the year."

When the Vegas Golden Knights stunned the hockey world Wednesday with the firing of head coach Gerard Gallant, it marked the seventh change behind an NHL bench since the Leafs fired Mike Babcock on Nov. 20. Add Shero's dismissal, and that's eight key positions vacated in less than two months. Some moves weren't related to on-ice performance — Calgary's parting of ways with Bill Peters and Dallas canning Jim Montgomery were the outliers — but most were. In all, there have been 14 coaching changes in the 31-team league since the end of last season

This report by The Canadian Press was first published Jan 15, 2020.