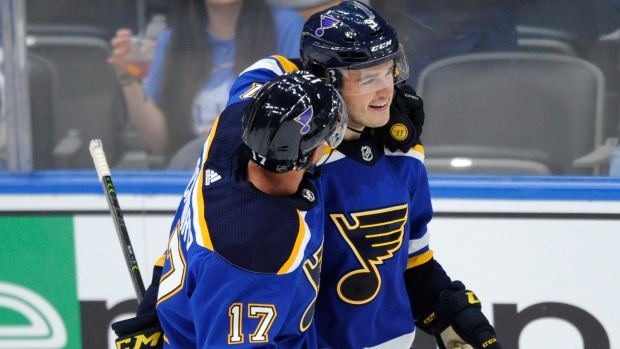 Jaden Schwartz, Alex Pietrangelo and Klim Kostin recorded a goal and an assist apiece to lead the defending Stanley Cup champion St. Louis Blues to a 5-3 win over the Columbus Blue Jackets Sunday in St. Louis.

Kostin's goal 7:24 into the third was the game-winner.

Tyler Bozak and Sammy Blais also scored for the Blues, who had Jordan Binnington play the entire game in goal. Binnington made 22 saves.

In Detroit, Madison Bowey scored 2:58 into overtime to lead the Detroit Red Wings to a 3-2 win over the Pittsburgh Penguins.

Tyler Bertuzzi and Anthony Mantha also scored for Detroit, which had Jonathan Bernier play the entire game in goal. Bernier made 32 saves.

In Denver, Nazem Kadri and Gabriel Landeskog scored in the shootout to lift the Colorado Avalanche to a 3-2 win over the Minnesota Wild.

Kadri and Landeskog sandwiched shootout goals around Cale Makar's miss. Gerald Mayhew was the only Wild skater to score in the shootout.

Tyson Jost and Jayson Megna scored in regulation for the Avalanche, who had got a 21-save performance from Philipp Grubauer.

In Winnipeg, Manitoba, Blake Wheeler had a goal and one assist to lead the Winnipeg Jets to a 4-1 win over the Calgary Flames.

Jack Roslovic scored 50 seconds into the game. Wheeler and Joone Luoto scored in a 72-second span in the third period, and Nikolaj Ehlers added an empty-goal with 1:36 remaining.

Adam Kuzicka scored at the six minute mark of the third period for the Flames.