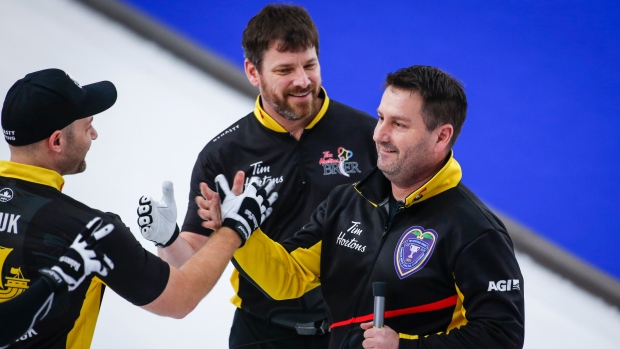 For the first time in a long time, “Jimmy the Kid” has New Brunswick in the hunt at the Tim Hortons Brier.

James Grattan is making his 14th career appearance at the Canadian championship this week inside the Calgary curling bubble and has led his rink from the Gage Golf & Curling Club in Oromocto to an impressive 4-2 start, taking down perennial contenders Mike McEwen and Brad Jacobs in the process.

On Tuesday night, New Brunswick dropped their second game of the week, losing to Jason Gunnlaugson's undefeated Manitoba rink. The 8-4 decision was wrapped up after just eight ends as Team Grattan struggled for the first time at the 2021 Brier, shooting a collective 70 per cent. Still, Grattan is very much in the mix when it comes to the championship pool.

The 46-year-old earned the “Jimmy the Kid” moniker way back during his first Brier in 1997 when he led the small Maritime province to an 8-3 round-robin record and a win over curling legend Ed Werenich in the 3 vs. 4 game. They finished with the bronze medal.

“We got on a little bit of a role. I think we went 8-3 in the round robin and I think it was Vic Rauter or Ray Turnbull at the time that [came up with the nickname]. All of a sudden it popped up in the papers,” Grattan told the media after beating Yukon Tuesday morning. “I think it helped that it was in Calgary, so it kind of had a Cowtown, western theme to it. It kind of stuck, and here I am 46 years old, and I still can't go into a room without someone yelling ‘Jimmy the Kid’ at me.”

New Brunswick skip James Grattan describes how he got his "Jimmy the Kid" nickname way back at the 1997 Calgary Brier. #Brier2021 pic.twitter.com/VoFEwNnwXX

Grattan won another bronze five years later (also in Calgary) in his second appearance, this time as a third for Russ Howard, but hasn’t been able to reach the podium since and hasn’t made the playoffs in his past 10 appearances.

Now, back in Calgary more than 20 years later, Grattan is doing his best to evoke “Jimmy the Kid” once again at the Canadian men’s curling championship.

“I've been around this event long enough where I've come into this event as one of the top two favourite teams back in the 2000s. So, I kind of relish the underdog role,” Grattan said. “I think these teams know we traditionally give them a challenge and I think that means a lot. But at the same rate, when we've beaten those big teams in the past, we haven't been able to consolidate it with a few more wins after that. That's the mission this week. Not to let that happen."

In addition to upsetting Jacobs and McEwen, Team Grattan have also taken out British Columbia’s Steve Laycock and Yukon’s Dustin Mikkelsen. Aside from Manitoba, their only loss came to Alberta’s Brendan Bottcher, who has appeared in the last three Brier finals, 6-5. They wrap up preliminary round play with games against Wild Card’s Wayne Middaugh and Greg Skauge of Northwest Territories.

Finishing in the top four in Pool A will get them into the elite eight, otherwise known as the championship pool. Grattan has never made it there since its inception in 2018.

“We were able to welcome a new player on our team who’s added a lot of skill and experience to our team, and I think that’s been a healthy distraction, too,” Grattan said of his new teammate earlier this week.

“Getting to know him and we’re sharing stories, having a good old time, having a drink at the end of the night and kind of decompressing, and debriefing our day and what we can do better to improve. I think just having that new player has helped us focus those conversations a little bit, too. It helps everybody in the lineup, not only him.”

Despite the solid start, not many people are expecting New Brunswick to hoist the Brier Tankard by week’s end. After all, they’ve never done it in the near century-long history of the Brier.

Still, Beuk knows the potential is there for Team Grattan if they can keep playing like they have been.

"Everybody has been on the same page right off the bat,” explained the Kingston, Ont., native. “We all have the same goal of being focused and trying to be as consistent as possible. We all want to win. I know we're not the favourite here this week, but we think we're playing well. We think we can win if we all play together. I know it's probably not in the script for us to win this thing, but sometimes the best stories aren't part of the script. So, hopefully we can win a few more games."

"Sometimes the best stories aren't part of the script."

Like many provinces across Canada, New Brunswick had their playdowns cancelled due COVID-19 restrictions. Team Grattan was awarded the spot at the Brier as defending champs. As a result, Grattan and company were able prepare the ice at their home club in way that would mimic the arena ice at Calgary’s Markin MacPhail Centre. That extended practice time has been one of the keys to their success so far, says Grattan.

It will be interesting to see if “Jimmy the Kid” can keep it rolling in the bubble.