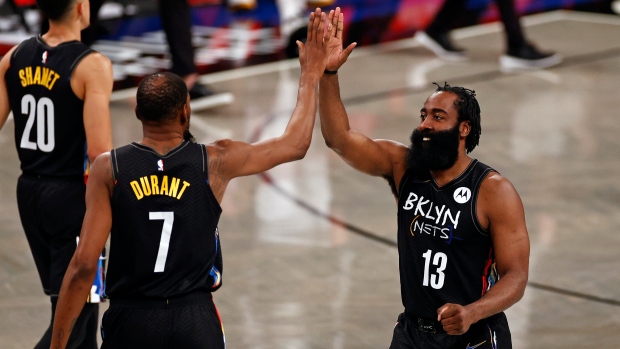 Brooklyn Nets stars James Harden and Kevin Durant have committed to play for Team USA at the upcoming Olympics in Tokyo, The Athletic's Shams Charania reported.

Nets star James Harden has committed to play for Team USA in the Tokyo Olympics, joining teammate Kevin Durant on the USAB squad, sources tell @TheAthletic @Stadium. Kyrie Irving is unlikely to play as he recovers from his ankle injury.

Charania added Kyrie Irving is unlikely to join his Nets' teammates on Team USA as he recovers from his ankle injury.

The Nets were eliminated by the Milwaukee Bucks in the second round of the NBA Playoffs.

Harden split last season between the Houston Rockets and Nets, averaging 24.6 points and 10.8 assists per game.

In his first season in Brooklyn, Durant averaged 26.9 points per game last season.