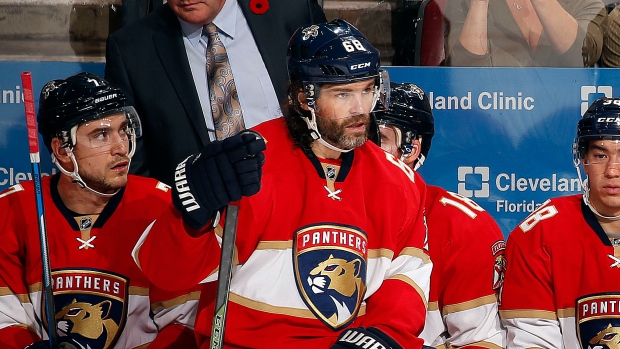 TORONTO -- Jaromir Jagr's mullet is older than half of the players on the Toronto Maple Leafs.

Jagr, now with the Florida Panthers, played his first NHL game on Oct. 5, 1990. Maple Leafs center Nazem Kadri was born the very next day. And at 26, he's one of Toronto's veterans these days. Budding star Auston Matthews is 19; William Nylander is 20. In all, a dozen players on the Leafs' current roster were born after Jagr made his NHL debut.

But to be honest, when the 44-year-old Czech legend looks around, that's pretty much what he's seeing almost every night in the NHL these days.

The invasion of youth around the NHL is truly the story of the hour.

"A lot of young guys are playing in the league and they're getting opportunities," Jagr, gray-specked mullet wrapped up in a bun, told ESPN.com Wednesday after practice. "Back then, there were so many good young players, too, but they just didn't get a chance."

Well, he should know. He was there. He lived it as a teenage rookie in the NHL. Except Jagr was one of the few 18-year-olds who cracked an NHL roster in those days. Now, it's commonplace.

"Unless you were drafted top-five in the world, I don't think you had a chance in your first year back then, in my opinion," said Jagr, the fifth overall pick in 1990. "It doesn't mean they were bad players, it's just that they didn't get a chance. It was a different game. It was a different style. But you had to get older to get your turn. Same with the money; you had to earn it [as players got older]. Same with the opportunity. It was different."

The difference was the way in which the game was played, Jagr added.

Jagr truly is a rare specimen, an elite talent who has been able to adapt and thrive in a few different eras of the NHL. He had the physical strength as an 18-year-old to break through in 1990 with the Pittsburgh Penguins, plus the incredible hands and vision in his prime years to dominate the NHL, and now the smarts and regimented physical work habits to still have an impact while nearing his mid-40s.

His durability is even more impressive, given how young the league is trending in the last few years.

Panthers goalie Roberto Luongo - who broke into the league in 1999 as a 20-year-old goalie with the New York Islanders - smiles when asked about the kids taking over the league.

"It reminds me that I'm old," said Luongo, 37. "But it's nice to see the game evolve. It's a faster game and a more skilled game."

Luongo points to how prospects hone their individual skills with specialty coaching.

"Now everybody as a kid works on skills; they've got private lessons and all that kind of stuff. I think that's why you see more and more kids come up that are ready at 18 and 19 years old to play," said Luongo. "Because they have a skill set that's pretty high. It's nice to see the game evolve in that direction."