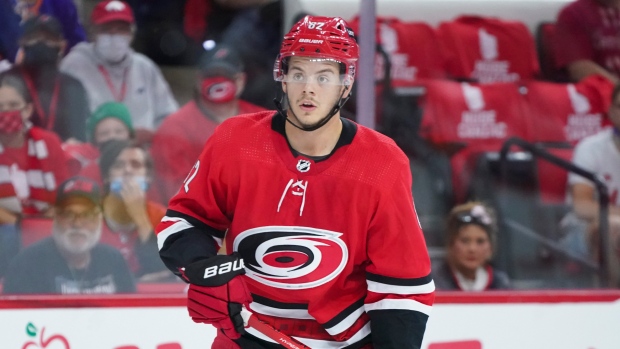 Jesperi Kotkaniemi’s first season with the Carolina Hurricanes did not get off to a good start.

After signing a one-year, $6.1 million offer sheet with the club in the off-season, the former Montreal Canadiens forward registered just four points in his first 18 games in Carolina.

The 21-year-old has turned things around since mid-November, a resurgence that Carolina general manager Don Waddell credits to a shift back to Kotkaniemi’s natural position of centre and the time it took for him to get used to the Canes’ quicker style of play.

“It was an unbelievably slow start for him, for multiple reasons,” Waddell told TSN Hockey Insider Pierre LeBrun, in an interview for The Athletic. “One reason is that we play a different system probably than where he was, everybody plays differently, we try to play fast. He likes to slow the play down. It’s just his style he’s had his whole career. So, I think there was a big adjustment.

“He was just really out of position. I think the adjustment for that was bigger than we all thought it would be. Since then, you’ve seen the type of player he is.”

Kotkaniemi has recorded 10 points in 16 games since moving back to centre in a game against the Vegas Golden Knights on Dec. 16, including nine points over his past 11 contests.

Hurricanes’ head coach Rod Brind’Amour added that Kotkaniemi has shown consistent improvement this season and answered the call when centres Sebastian Aho and Jordan Staal were forced to miss time.

“He has gotten better as the year has gone along,” Brind’Amour said. “With a greater role due to guys being out, he really stepped up his game.”

Ahead of the Hurricanes’ game against the Canadiens on Thursday, Waddell said that the club is in no hurry to work out an extension with Kotkaniemi and that rumours of a second, long-term deal being worked out alongside the offer sheet were false.

“Absolutely false,” said Waddell. “When we talked about the offer sheet, we talked initially about a longer-term deal that wasn’t the right play, so that’s why we went short. We all knew there was risk on both ends here, more on our end, and we’ll deal with it when the time comes.

“We have not had one conversation about what the future is going to look like.”

Despite Kotkaniemi’s slow start, Waddell does not regret giving the offer sheet and believes that his progress over the past month has shown the true potential of the player the Canadiens took third overall in the 2018 draft.

“No, not at all,” Waddell said, “Maybe if you would have asked me that after 10 games, I might have had a different answer.

“Especially these last half-dozen games or so, he’s been so good for us,” he added. “It gives you more confidence that he’s the player we all thought he was.”