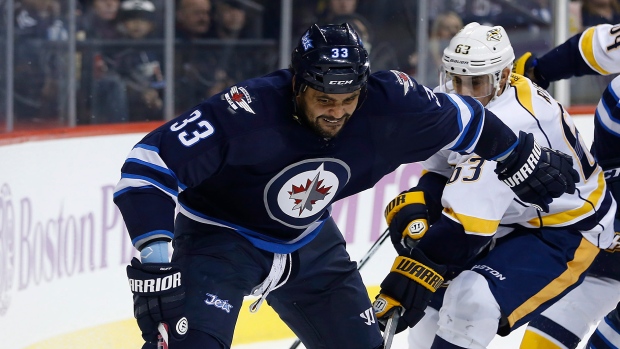 Jets players were defending the all-star defenceman's character at Thursday's practice after his nasty cross-check to J.T. Miller's neck during Winnipeg's 3-2 loss to the New York Rangers on Tuesday.

"He's not a guy that is a dirty player, so he definitely didn't mean to do that," defenceman Mark Stuart said after practice, which Byfuglien didn't take part in.

"He's not out there to injure guys."

Coach Paul Maurice said Byfuglien's absence was for maintenance, not because of the conference-call hearing the veteran had earlier in the morning with the NHL's department of player safety.

The NHL suspended Byfuglien four games for the hit later Thursday afternoon. It's a tough blow for a team that has just five regular-season games remaining and is desperately holding on to a playoff spot.

It was late in the second period of Tuesday's game when Miller fell to the ice in front of Jets goalie Ondrej Pavelec. Byfuglien was standing behind Miller, and the 260-pound defenceman reached down and drove his stick across the back of Miller's neck, pushing his head toward the ice.

No penalty was called and Miller played the rest of the game, setting up Chris Kreider's winning goal with less than four minutes to play.

Jets captain Andrew Ladd watched a replay of the incident.

"It doesn't look good on video," Ladd admitted. "I think it's easy to slow it down after the fact.

After the game, Rangers head coach Alain Vigneault told reporters Byfuglien's move "was one of the most vicious cross-checks I've seen this year."

"Violent, deliberate. Could have broken his neck, " Vigneault said.

It was Byfuglien's first suspension, though he has been fined by the league three times.

The Jets have overcome injuries to key players throughout the season, including Byfuglien, and now they have to deal with another huge absence as they battle to make the playoffs for the first time since the franchise relocated to Winnipeg in 2011.

"Sometimes maybe it makes us play a closer team game and good things come of that," Ladd said.

The Jets have lost three of their past four games. Their next is at home Saturday afternoon against Vancouver.

Pavelec also didn't practise Thursday, but it was because of a flu going through the team, Maurice said.

"He plays hard, he's physical, but quite often a lot of the hits meet Buff," Maurice said. "He has the puck an awful lot, he moves the puck and guys try to finish their checks and end up on their butts so it looks more in that he's hunting guys down.

"He hasn't been in a tremendous number of fights over the course of his career because he hasn't crossed that line with a lot of people."