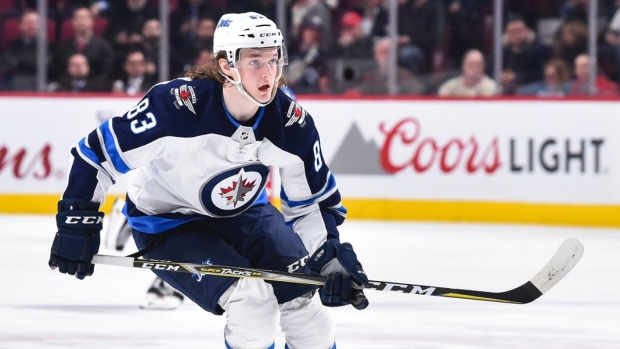 WINNIPEG — The Winnipeg Jets recalled defenceman Sami Niku from the Manitoba Moose on Sunday and he will be in the lineup on Monday when the team visits the Philadelphia Flyers.

Niku, 22, has two assists in 10 games for the Jets this season after making his debut last year. He collected both of his assists on Jan. 17 in a 5-1 win against the Nashville Predators.

Niku has played 19 games for the Moose this season, registering three goals and nine assists.

Niku was drafted by the Jets in the seventh round (198th overall) in the 2015 NHL draft.

Head coach Paul Maurice said on Sunday that while the Finn is in, Ben Chiarot remains out of the lineup. The 27-year-old rearguard has not played since January 13 and is considered day-to-day with a lower body injury.

Maurice says Brossoit starts for @NHLJets tomorrow vs @NHLFlyers. Hellebuyck starts vs @NHLBruins Tuesday. Chiarot will not play tomorrow, Niku is in.

Byfuglien did not travel & will not play on this trip. @TSN1290Radio @TSNHockey

Defenceman Dustin Byfuglien - out since incurring a lower-body injury against the Minnesota Wild on December 29 - did not travel with the team and will not play on this trip. Maurice says the 33-year-old will also be unavailable for a January 31 home date with the Columbus Blue Jackets.

- With files from TSN.ca