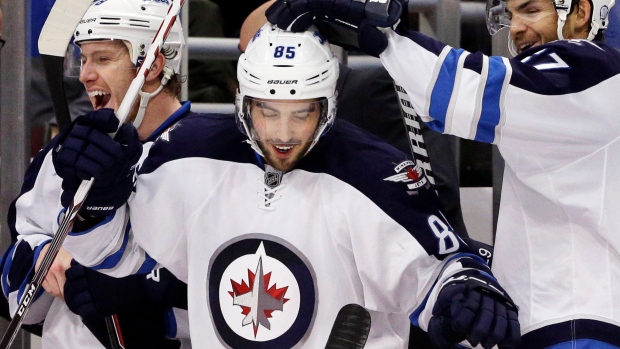 The move was puzzling for a variety of reasons. We see underrated players slip into free agency all of the time, but that’s largely the result of a player suffering from poor on-ice shooting percentage and/or on-ice save percentage variance. Perreault – by just the simple counting numbers that hockey operations guys love – had 43 points in 69 games. As a per-sixty rate, his scoring rate (2.45) ranked only behind Ryan Getzlaf (3.13) and Corey Perry (3.04) on the team.

Perhaps there was a fear about a qualifying offer leading to arbitration and an award unfavourable to the team, but there’s still an opportunity cost for every decision. In this case, the opportunity cost was acquiring Nate Thompson ($1.6-million annual cap hit) to fill Perreault’s void. Though he comes cheaply, Thompson hasn’t been very productive, and the team had to fork over a fourth and seventh-round draft pick.

One can debate the merits of Anaheim’s decision-making process here, but I think what happened after Anaheim is even more fascinating.

In typical ‘Day One of Free Agency’ fashion, a bunch of hockey general managers chased precisely the wrong things. Just minutes before Perreault inked a three-year, $9-million contract in Winnipeg, Florida gave fellow centre Dave Bolland (fresh off of a major Achilles injury) $27.5-million over five years. They expectedly cited “character, hard work, and leadership“ as arguments in support. The analytics community countered, calling the contract “insane“. Bolland, of course, has one goal through twenty games, with the second-worst Corsi% (48.4%) of Panthers forwards.

There is $18.5MM in committed dollars separating Bolland and Perreault, and just $2.6MM in committed money separating Perreault and Thompson. As a fun little exercise, let’s run through some of our counting and advanced numbers for the three centres, and see which team is getting the best bang for their buck.

First, point-scoring over the years at even-strength:

It’s funny – points historically drive contract price, which makes Perreault’s $3-million annual deal with Winnipeg a bargain from just our first graph. Anyway, there’s really no comparison between the three from a scoring perspective – Perreault has been far and away the most productive on the offensive end, and it’s not close.

How is Mathieu Perreault able to sustain such prolific scoring rates year after year? From an individual standpoint, Perreault drives some of his team’s scoring by constantly shooting from favorable distance. Perreault is sneaky-great at positioning himself into danger areas – Bolland and Thompson, not so much.

When Dave Bolland and Nate Thompson have been on the ice, their teams experience extremely fewer shots from the danger areas in front of the net. When Mathieu Perreault has been on the ice – well, his teams live in that danger area. This is as compelling a chart as any from an offensive aspect.

What if we get into some of our favorite underlying numbers? Which of the three players is the best at controlling play from a territorial aspect? For this, we can look at RelativeCorsi%, which gives us the difference in Corsi% a team possesses with a player on the ice versus off of the ice. Generally, better players post positive RelativeCorsi% year after year, and weaker players post negative RelativeCorsi% in the same fashion.

Mathieu Perreault’s teams are consistently better from a possession aspect with him on the ice. The opposite is true for both Dave Bolland and Nate Thompson. Dave Bolland’s only positive season came in an injury-shortened season in Toronto, and based on his surrounding numbers, we should probably be skeptical that the production was meaningful. Nate Thompson has just been a straight negative player.

What if we get into pure defensive metrics, like Corsi Against per 60? This should at least show us what players are better at suppressing shot attempts, and at the very least, underline potential defensive contributions that may not appear in some of the other graphs.

I’ll go one step further, too, and adjust for zone starts, which will avoid penalizing players (like Bolland) who start frequently in the defensive zone.

This is simply a raw comparison of a player’s ability to suppress shots over thousands of minutes without the creep of zone start effect. Even from a defensive aspect, Perreault out-shines both Thompson and Bolland.

And, ultimately, what we care about is goals. The reason why so much time is spent talking about the merits of Corsi% is that we know it is predictive of future goal-scoring, be it at the individual or team-level. We know Perreault is a better offensive player. We think he may even be a better defensive player, either by being so great offensively or underrated defensively.

How does it look from a goal-scoring perspective?

Were teams better or worse from a goal-scoring perspective with the player in question on the ice? For Mathieu Perreault, mostly better. For Dave Bolland, mostly worse. For Nate Thompson, always worse.

To recap, Mathieu Perreault (a) is a better scorer; (b) has established ability to generate offense from dangerous scoring areas; (c) is a very good, perhaps elite possession driver; (d) an underrated defensive player, in some capacity; and (e) consistently improves his team from a goal-scoring aspect. One wonders how a player of this skill set can slip through the cracks, though one fears the bad answer to that question is ‘because he has a small frame’.

Anaheim’s okay with the current duo of Getzlaf/Kesler down the middle, but you have to wonder how much better they would be with a player of Perreault’s skill set in tomorrow’s lineup. I think Florida should seriously be questioning how they spent $18.5-million more than Winnipeg and ended up with a significantly inferior player.

As for Winnipeg, they obviously received a bargain and it’s one of a few reasons why they’re returning to the playoffs this season.