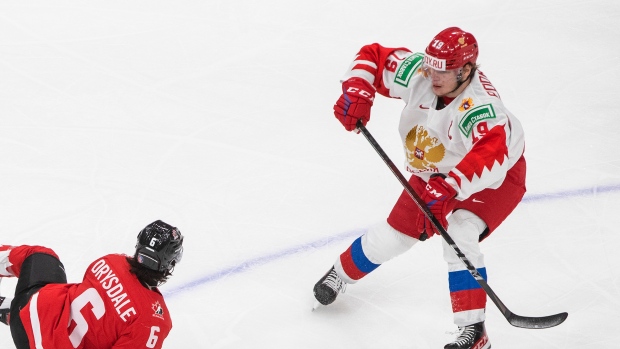 Vancouver Canucks general manager Jim Benning told TSN Radio 1040 Vancouver on Monday that the team is planning to have Vasili Podkolzin make his NHL debut this season once his KHL deal expires.

Podkolzin, selected 10th overall in the 2019 NHL Draft, will play for bronze at the World Junior Championship on Tuesday after Russia lost 5-0 to Canada. He has two goals and four points in six games while serving as Russia's captain.

Following the tournament, Podkolzin will return to the KHL's SKA St. Petersburg. Benning said the forward is under contract with the team until April 30.

"We're going to wait for his contract to run out and then he's free from the KHL and then we want to try and talk to his agent and if we can try and get him signed and get him over here and get him up and going," Benning said. "He's got an NHL body, he's a big, strong kid. His attention to detail is really good. We're hoping that once we get him signed here, that we can get him right in our lineup and see what he can do."

The Canucks regular season schedule, which begins on Jan. 13, wraps up on May 8.