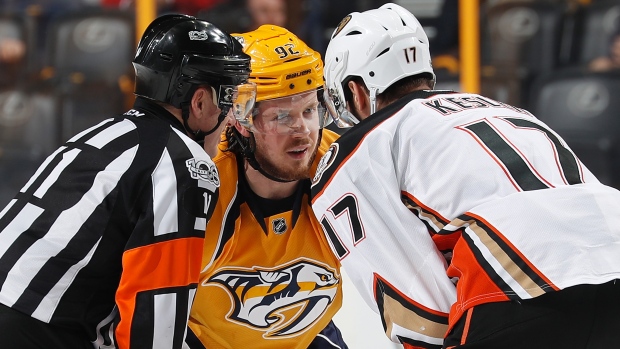 Anaheim Ducks forward Ryan Kesler reignited his feud with Nashville Predators centre Ryan Johansen with a tweet earlier this month, which Johansen believes he should regret.

Kesler, who had been silent on Twitter dating back to February, tweeted at Johansen on Aug. 5, writing "How’s summer training going? Want to meet me in the streets before we get going on the ice?"

Johansen responded within hours, though not directly at Kesler, saying "I'll pay for your parking."

@RyanJohansen19 How’s summer training going? Want to meet me in the streets before we get going on the ice?

The Predators forward told Adam Vingan of The Athletic that he believes Kesler should have just stayed silent.

“I don’t know what he was doing that day,” Johansen said. “Clearly I don’t think he was thinking right because he made a little bit of a fool of himself.”

The bad blood between the two forwards started during the 2017 Western Conference Final when Johansen called out Kesler after Game 2 of the series.

"I mean, it just blows my mind watching," Johansen said at the time. "I don't know what's going through his head over there. Like his family and his friends watching him play, I don't know how you cheer for a guy like that. It just doesn't make sense how he plays the game.

"I'm just trying to go out there and play hockey, and it sucks when you've got to pull a stick out of your groin every shift."

Kesler's tweet seemed to come at a strange time, in the midst of the NHL off-season with his own playing status up in the air. Ducks general manager Bob Murray cast doubt in July that Kesler would be able to play the full season due to a lingering hip injury.

"For me, hearing that and just how I approach my game individually, I just want to win games, and I want to help our team win as many games as possible," Johansen told The Athletic. "I think it’s awesome if points come along with that. Points are a huge part of the game, being able to put up goals on the scoreboard and make plays for teammates to help score goals and things like that. It really shows if you’re having success or not, too, if you’re getting lots of points.

"But at the same time, I take a lot of pride in my two-way game, and I really want to be good in my defensive zone. I thought I took a really big step in my two-way game last year, and if I can add to my scoring more while doing that, that would be a great year for myself. I want to try to continue playing the solid two-way game for my team where I can be a very trustworthy first-line center and always be counted on to get the job done and at the same time rack up some more points. I think that’d be a good step for myself.

"If I can add another level in scoring to my game right now, I think it’d be huge for our team. Obviously, with the depth we have, it would make our forwards even more dangerous. It’s a challenge for me, for sure. That’s something I want to do, and I look forward to trying to be successful. I also look at my playoffs, too, and how I was a point-a-game (player). Obviously, the regular season is very important, but if I can show up in (the) playoffs and elevate my game at that time of the year to be producing more, then there shouldn’t be a reason why I can’t do that all season long, as well."

The Predators and Ducks will meet for the first time this season on November 12 in Anaheim.