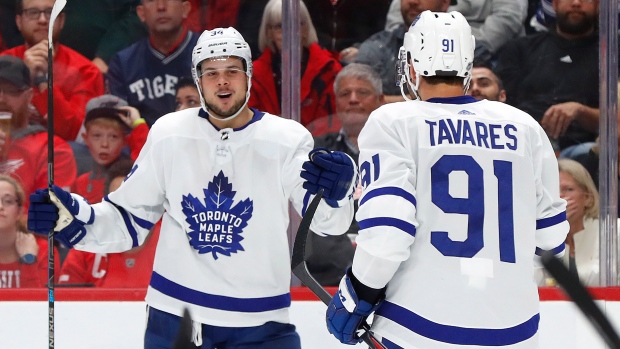 Toronto Maple Leafs centres John Tavares and Auston Matthews said Wednesday they have been briefed on the team's plans for naming their captain ahead of their opening game, but did not share further details.

Tavares, Matthews say they’ve been briefed on plan for tonight re: captaincy announcement ... obviously not going into details

Maple Leafs head coach Mike Babcock told TSN on Tuesday that the team will have a captain for the season-opening game against the Ottawa Senators on Wednesday.

Babcock was then asked whether it would be Tavares, but declined to reveal who will be wearing the 'C.'

He declined once again on Wednesday to give an exact timeline for when or how a captain will be revealed.

The team spent the past three seasons without a captain after trading Dion Phaneuf to the Ottawa Senators in 2016. Prior to Phaneuf receiving the “C” in 2011, Mats Sundin served as captain from 1997-2008.

Tavares is entering his second season with the Maple Leafs after signing a seven-year, $77 million contract to join the team as a free agent in 2018.

He scored a team-high 47 goals and posted 88 points in 82 games with the team last season.

The 29-year-old previously served as captain of the New York Islanders from 2013-18.

Matthews, 22, is entering his fourth season with the Maple Leafs after being selected first overall in the 2016 NHL Draft. He has 111 goals and 205 points in 212 games since joining the team and posted 37 goals and 73 points in 68 games last season.

The Calder Trophy winner in 2017, Matthews has been named an NHL All-Star in each of his first three seasons.