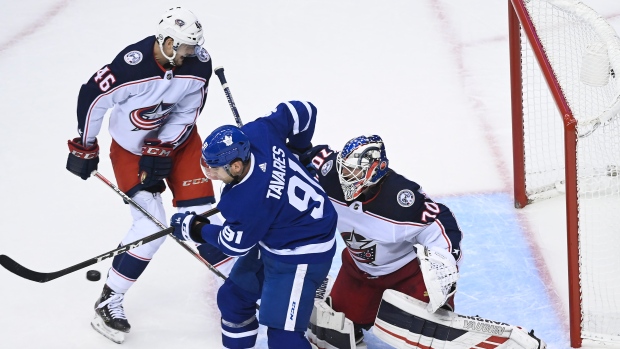 The Maple Leafs practised at Ford Performance Centre on Monday.

John Tavares only mustered two shots on net on Sunday night. Mitch Marner didn't hit the net at all. The linemates are vowing to do a better job against the stingy Blue Jackets in Game 2​.

"They play really well as a five-man unit and playing five on the inside," said Tavares. "They have a comfort level there and have built some consistency there over the last couple of years so we have to continue to adjust and adapt with the way we want to play ... starting with myself. I have to do a better job of trying to find ways to break them down and create the opportunities and looks that we need."

The Jackets were the best team at defending the rush this season, which neutralizes a big part of the Tavares-Marner magic.

"This team, as we fully expected, was going to make it hard on us offensively particularly on the rush a spot where both Mitch and John have a lot of success," said coach Sheldon Keefe. "We have to find different ways to score and that's an adjustment. We need those guys to be playing at their best, especially now coming off a loss, we need to respond in a big way. We think everybody on our team has another level to get to and we're going to need it tomorrow."

But Marner, in particular, seemed out of sorts against Columbus. There were no dynamic bursts of creativity that have become the hallmark of the winger's game.

Dating back to last season against Boston, Marner has now gone four straight playoff games without a point and has been held without a shot in three of those games.

Tavares and Marner have to get their cycle game going, which won't be easy against the unheralded defence pair of David Savard (6-foot-2, 229 pounds) and Vladislav Gavrikov (6-foot-3, 213 pounds).

"They just play well with one another," said Jackets coach John Tortorella. "They play well off one another. They've been paired for quite a while. I just think they're in sync. They're very good defencemen underneath the hashmarks and very underrated as far as what they can do up the ice offensively."

Shot blocking is a big part of the Jackets' strategy and Savard and Gavrikov are among the best at it. Savard finished second in blocks in the NHL in the regular season.

"Blocking shots is a big part of defence and Savvy has it tattooed on his head," said Tortorella. "He's going to block shots."

"They do commit themselves and block a lot of shots," said Tavares, "but, they do it really well, they don't sell themselves out, they do a really good job of protecting the front of the net and the middle of the ice and high-danger areas. They're big guys and have a good feel and good read of when to get in the lane and how to take away certain parts of the net."

So, how do you get past them?

"Just being aware of that and doing the best we can to break them down and draw them out away from the net and make them have to defend and play in their own end consistently," Tavares said. "I'd like to think that over 60 minutes you can wear them down and find ways to create opportunities and get good looks on net."

"They play really well in tight," observed Marner. “They're very smart with their gaps and taking away the blue-line and trying to make it hard on you to make plays when you do enter the blue-line. For us, something we have to get better at it is make sure we have a middle guy coming through with speed more. When that happens we can kind of separate them a bit more. We know this team likes to block a lot of shots and we let them do it too easily, shooting into them too much so that's on us to find ways to get more pop plays or sticks involved so we can bypass those blocks."

The Jackets blocked 18 shots in Game 1, which is up from their season average of 15, but Tortorella wasn't satisfied.

"Our whole team, we need to be better at that," the coach said. "I think we need to do even better."

How do the Maple Leafs be able to crack the #CBJ defence in Game 2? https://t.co/I4cokJmljo#TSNHockey pic.twitter.com/8Mshv39vd8

Columbus is doubling down on its defensive system as Keefe looks to find ways to poke holes in it.

"Just kind of looking for different ways that we can utilize our offensive zone time," the coach said of his latest video session. "We actually ended up getting more time in the offensive zone than I thought that we might. I thought it would be a little bit harder to get through the neutral zone, but we did a pretty good job of spending time in their end. Of course, they did a really good job of keeping us away from their net so that's a big challenge for us and one that we knew we were going to have to face. It's one thing to watch it on video and prepare for it and a whole other thing to be in the fight. We got a one-game feel for it and we expect ourselves to be better tomorrow."

The truth is the Leafs feel like they did a lot of things well despite the Game 1 loss. The last thing they want is to let the Jackets' system get in their heads like what happened to the Tampa Bay Lightning during last year's shocking sweep.

"I don't think anyone in our room's panicking or getting nervy or anything," said Marner. "We know we have a lot better to bring out and show."

“We've got to get more pucks to the inside and into those spaces," said Keefe. "It is a lot easier said than done so we've got to really work in sequences and work to break them down and get them tired. We had a couple of real quality looks where with a little more luck, it goes our way, but we need more of them. It is not enough. We need to stay with it, stay focused, stay hungry, stay competitive and not get frustrated. That is what their system is designed to do: to frustrate you. We've talked a lot about that. The good news is that, in talking to our guys and the type of practice that we had, our guys are not frustrated. Our guys are hungry to get back at it and recognize where we can get better and know that we have more to give. They'll be ready to play tomorrow."

Auston Matthews was the most dangerous Toronto player on Sunday firing six shots on net and hitting the crossbar on another attempt. Keefe believes William Nylander deserves some credit for fuelling that line's attack.

"William was involved in a lot yesterday," Keefe insisted when asked what Nylander could do better. "I thought he and Auston were two guys that were really driving things for us offensively. I thought it and I felt it and then the stats back it up. He had the puck on his stick more than anybody on our team in the offensive end so I would say he was not a problem for us yesterday."

Nylander mustered just one shot on net and now has just one point in his last six playoff games dating back to last year's series against Boston.

While offensive players can often generate momentum on the power play by getting some touches around the net, Toronto's top stars can't depend on that in this series. The Blues Jackets were short-handed the fewest times in the NHL during the regular season and only took one penalty in Game 1.

"We're trying to move our legs and keep our sticks down," said Tortorella. "It was a point of emphasis going into the game due to watching the first day and seeing all the penalties being called. I thought the refs [Kevin Pollock and Kyle Rehman] did a good job of letting the teams play and I thought that's why it was such a good game, because both teams were allowed to play and both teams had surges and we found a way to score a goal."

Keefe has told his players not to expect many power plays in this series.

"We looked at the first day of the games on Saturday and the volume of penalties," Keefe said. "The average was almost near 10 or 9.5 power plays. We weren't sure if there would be a little bit of carryover there, but generally, our expectation was power plays would be hard to come by. We were excited when we got our one opportunity and of course, disappointed we didn't make good on it. We have to be able to take advantage of the ones we do get and look to keep our feet moving and draw as many as we can while recognizing that we are really going to have to be good and win the five-on-five battle, most importantly."

Toronto only drew 2.8 power plays per game in the regular season (23rd in the NHL).

"We think everybody on our team has got another level"

Nick Robertson nearly potted a goal early in his first career NHL game, but was robbed by the skate of Joonas Korpisalo.

"It went by so fast," the 18-year-old recalled. "Just tried to get it on net and fortunately I got it to the left side where I wanted to, but it was a good save by him. It was unlucky, but it was good to get that first shot of the game and it gave me more confidence."

Robertson didn't look out of place despite getting thrown into the fire in Game 1. The left winger "fit right in with the group​," according to Tavares.

"Personally, I thought I did better than expected and I know [Tuesday] I'll be a little more confident and get some more shots off my stick and play more of my game," he said.

Robertson played 12 minutes and 28 seconds on Sunday registering two hits and two takeaways to go along with the one shot.

There was one line change at Monday's practice as Pierre Engvall, a scratch in Game 1, skated at centre on the fourth line while Frederik Gauthier was the extra forward at the workout. The fourth-line players, including wingers Kyle Clifford and Jason Spezza, all played less than four minutes in the series opener.

But Keefe made it clear he hasn't made any final decisions on Tuesday's lineup. In fact, the coach was quick to point out that Engvall, who struggled before the pause, hasn't exactly earned a spot.

"Pierre's a guy that, for me, didn't have a great camp for us," Keefe said. "We think he's got a lot more to offer. When he's at his best we think he makes us a better team, but we haven't seen him at his best here throughout camp and even in the little bit of opportunity we gave him in exhibition. When Pierre gets back in the lineup we expect him to really push to stay in the lineup."

Engvall had just one goal and two assists in the 26 games prior to the pause.
---