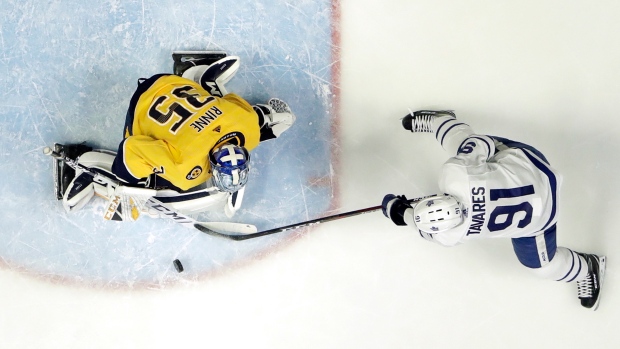 The Toronto Maple Leafs haven’t had a captain since defenceman Dion Phaneuf wore the ‘C’ nearly four seasons ago.

And speculation is rising that this may be the year head coach Mike Babcock and the front office decide on the official leader of the dressing room.

While Auston Matthews, Morgan Rielly and John Tavares - who captained the New York Islanders for five seasons before signing with the Leafs last summer – are all candidates for the position, Tavares says he’s not thinking or concerned about who may receive it.

“I think it’s a very special and significant role being with the Maple Leafs and the history of it,” Tavares told TSN during Nick Foligno’s charity event in Sudbury on Sunday. “There hasn’t been one here for a little while, so certainly there can be a lot made about it, but we have so many good quality people and players in our locker room we know it’s not going to change.

“I think how we go about our daily business or how we focus for the season and how we prepare, we just kind of be together, work together, try to help each other and when management feels that it’s right, they’ll make that happen.”

Tavares added that he has full faith in the front office to make the proper decision when the time is right.

“I think we will have a good idea when the time is right,” he explained. “I think we have plenty of guys that can fill that role and do a great job at it.

“I think that’s a real special thing to have when you have so many quality people and quality players that can really fill that role and really embrace that opportunity. Obviously there’s special significance to it, so when the time is right, I know that they will address it and do that if it’s necessary.”

The 28-year-old Mississauga native had the best season of his career in 2018-19, scoring 47 goals and tallying 41 assists over 82 games. He’ll enter the second season of his seven-year, $77 million deal when training camp opens in September.

Aside from the captaincy rumours, the summer has been a busy one for the Maple Leafs. General manager Kyle Dubas has not been shy about making moves, acquiring veterans Tyson Barrie, Alexander Kerfoot, Jason Spezza, Cody Ceci and Ben Harpur while parting ways with longtime Leafs Nazem Kadri, Connor Brown, Patrick Marleau and Nikita Zaitsev and allowing Jake Gardiner to hit free agency.

Tavares is excited to work with his new teammates and the team’s young core (like forwards Kasperi Kapanen and Andreas Johnsson who were both signed to new contracts) to see what they can do this season.

“I think certainly with the talent and youth we have and the impact our young core makes, I think there’s no question that there will be big steps from them,” he told TSN. “I think not just on the ice and the impact they make, but I think certainly in all areas of our team, especially in the locker room and bringing this group together and continuing to learn from one another, grow together and all the new guys we have on board to really make them part of the group right away, get the continuity going and continue to evolve moving forward as a team.”

The biggest storyline this off-season for the Leafs remains the status of Mitch Marner’s contract negotiations. The restricted free agent has yet to sign an extension and seems to be in similar situation as teammate William Nylander, who didn’t suit up for Toronto until last December after a long holdout.

Tavares, however, says he is in full support of his teammate and thinks the two sides will come to an agreement sooner than later.

“I think Mitch knows that I am there for him whenever he needs it,” he said. “But you want to respect his situation and his process and the way they’re going about it.

“You know there’s a lot of restricted free agents unsigned still, lots of guys that are in similar position to him. There’s still some time here and I think we all believe the right thing will happen and something will get worked out. I think that’s what both sides obviously want. Sometimes it takes a little bit longer than others. Mitch is obviously an important player for our team and just the type of guy he is as well. We really count on him so we want to get him there for Day 1 of camp and getting moving forward and continue to build this thing and move toward to the ultimate goal.”