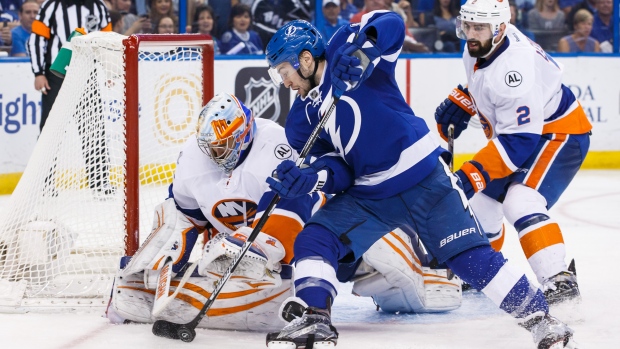 Johnson had two goals and an assist and the Tampa Bay Lightning beat the New York Islanders 4-1 on Saturday to even the second-round series at a game apiece.

Lightning goalie Ben Bishop rebounded after being pulled in second period of Game 1 to make 19 saves. He gave up four goals on 13 shots Wednesday night in a 5-3 loss.

"Game 1, a couple of unlucky bounces there," Bishop said. "You just come back the same way in Game 2. You don't change anything. That's just kind of been the way I do it."

Jonathan Drouin and Victor Hedman each had a goal and an assist for Tampa Bay.

"This was one we absolutely needed," Tampa Bay coach Jon Cooper said. "They came down here probably saying, 'Hey, if we can split it's all good for us,' and we're probably a little disappointed that we split. But if you look at us after losing Game 1, we're sitting there saying, 'We have to have Game 2,' and we got it."

"I thought it was closer than it indicated," Islanders coach Jack Capuano said of the final score. "We've just got to bounce back. Guys have got to play a little better."

Game 3 is Tuesday night in Brooklyn.

"It's always disappointing when you do get the first one and that you can't go out and do it again," Islanders centre Frans Nielsen said. "But going here, I think we would have taken it coming home 1-1."

After Islanders teammates Cal Clutterbuck and Nick Leddy collided at the Tampa Bay blue line, the Lightning got an odd-man rush that resulted in Johnson's backhander that opened the scoring 6:03 into the game.

"It gets the confidence going," Johnson said. "We were trying to get that first goal. We were able to do that and extend it."

Johnson extended the Tampa Bay advantage to 4-1 with a late empty-netter.

Drouin made it 2-0 on another backhander that trickled past Greiss at 11:55 of the first. It was the first career playoff goal, coming in his 13th game, for the third overall pick in the 2013 draft.

Kulemin's deflection cut the deficit to 2-1 on the Islanders' third power play with 4:45 left in the first.

Bishop turned aside 11 of 12 first-period shots.

The Lightning limited New York to just eight shots, including three during the third, over the final two periods.

Hedman stopped a 23-game playoff goal drought to give Tampa Bay a 3-1 lead during a power play at 11:59 of the second. His shot from the blue line went off New York's Calvin de Haan.

Hedman's goal came after Clutterbuck was sent off for goalie interference, a penalty that appeared to stun players on the New York bench.

NOTES: Johnson tied Brad Richards for third place on the Lightning career post-season list with 18 goals. Only Martin St. Louis (33) and Vincent Lecavalier (24) have more. . Tampa Bay D Anton Stralman, out since breaking his left fibula March 25, is skating before practice but is not ready yet to return. Tampa Bay also was without D Matt Carle, who sat out with an undisclosed injury. ... Islanders D Ryan Pulock (upper-body injury) missed his fourth straight game but could soon be ready to play. ... New York has allowed the first goal in seven of its eight playoff games this season.