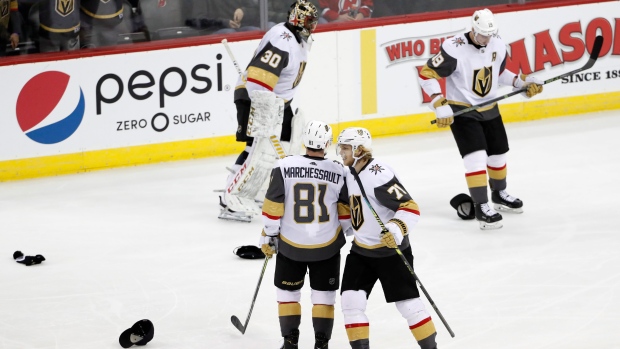 Marchessault scored twice in the first 5:04 of the third to give the Golden Knights a 3-2 lead. He added a power-play goal midway through the period, and Vegas held on even after New Jersey’s Nico Hischier scored 20 seconds later.

The Golden Knights have won four straight to improve to 15-11-4.

“It’s fun,” Marchessault said. “We didn’t have that all year so far, so it’s good that we get on a roll.”

Malcolm Subban had 32 saves, and Chandler Stephenson scored in his first game since being acquired Monday from the Washington Capitals.

Hynes was fired Tuesday after a 9-13-4 start that left the team in last place in the Metropolitan Division and with the NHL’s second worst record.

General manager Ray Shero announced the move roughly 20 minutes before Hynes was scheduled to speak to the media before the game. Hynes had been the coach for four-plus seasons.

Shero named assistant Alain Nasreddine the interim coach, and Peter Horachek, a pro scout for the team, joined the coaching staff as an assistant.

“Tonight is a new beginning, and we had the lead, yes, going into the third, but it was more about what we did and what we didn’t do,” Nasreddine said. “There are no excuses.”

The dismissal came a day after the Devils were ripped by the Buffalo Sabres 7-1, a game Shero said was hard to describe. That followed a 4-0 loss at home to the rival New York Rangers on Saturday.

Subban has been playing for Marc-Andre Fluery, who has been away from the team for the past week with a family illness.

“It’s been huge. Obviously, you get a couple wins you feel better about yourself, you feel good about your game, so it’s been great obviously,” Subban said. “Still stuff to work on, but it’s coming along so it feels good right now.”

Struggling Devils forward Taylor Hall had a fast-break chance stopped by Subban in the first period before Palmieri scored a minute later off a pass from Damon Severson to make it 1-0. New Jersey outshot Vegas 17-7 in the first period.

The Golden Knights tied it in the second period on a centring pass by Alex Tuch to Stephenson at 5:24.

“That’s what he does,” Golden Knights coach Gerard Gallant said of Stephenson. “He’s done it before. He’s played on a real good team, and he’s had that role a little bit, so when we give him an opportunity and you know you want to make a player feel comfortable coming to a new team and scored a huge goal for us tonight, played some PK and it worked out.”

Bratt restored the Devils’ lead 14:17 into the second. Golden Knights coach Gerard Gallant challenged for goalie interference, but the referees said Hall was pushed into the crease by Paul Statsny.

NOTES: No. 1 overall pick Jack Hughes remains out of New Jersey’s lineup with a lower-body injury. This was his third consecutive game missed. He’s considered day-to-day. ... Devils D Connor Carrick was also out with injury while D Mirco Mueller and C John Hayden were scratched. ... D Nick Holden and C Cody Eakin were scratches for the Golden Knights.

Knights: At the New York Islanders on Thursday.