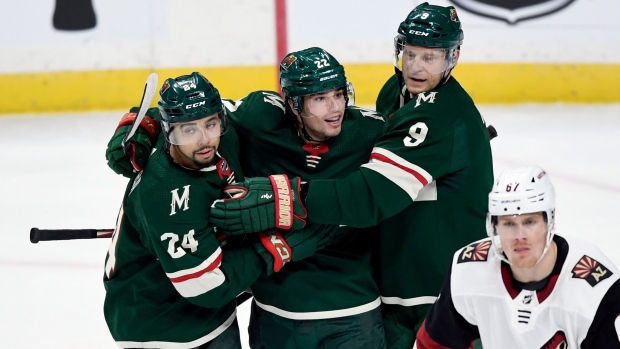 ST. PAUL, Minn. — Bruce Boudreau knows the reality of returning from a West Coast swing and warned his Minnesota Wild about a letdown following their 2-2 trip.

Minnesota took the message to heart and stayed the course during a pivotal third period in its return home.

Jordan Greenway deflected in a goal with 7:49 remaining, and the Wild returned with a 3-2 win over the Arizona Coyotes on Thursday night.

Zach Parise had a goal and an assist and Kevin Fiala scored for the fourth time in six games for Minnesota.

“Your body is so acclimated to that time zone, you come back here and you hear the stories about the first game is always a really tough one coming back and it is,” Boudreau said. “But we let them know we can’t afford to have that excuse, ‘Oh the first one’s a tough one.’ So, no matter what, we had to play the way we played.”

The Wild recovered from a pair of two-goal deficits to win in Arizona last week. The Coyotes tied Thursday’s game twice but Minnesota didn’t let Arizona complete any comeback.

Devan Dubnyk made 27 saves for the Wild, who were tied for an NHL-low 13 points entering the day amid a road-heavy early schedule. They are 4-1-1 at home.

“To sit and talk, or to complain or feel sorry for yourself, is not going to get you anywhere,” Dubnynk said of the schedule. “The nice thing is this is back to being a place that is good for us to play and a place that are fans like to come watch us.”

Conor Garland and Lawson Crouse scored for Arizona, which entered the game with the second-most road wins in the league this season. Antti Raanta stopped 31 shots, enduring a barrage early from the Wild.

Minnesota held a 20-8 shot advantage after the first period.

"Just a bad start,” Coyotes defenceman Alex Goligoski said. “I kind of felt like we were a little disjointed all night. Not a lot of communication out there. We kind of got run around a little bit. We were still in the game and they get the power-play goal and we don't. That's the difference a lot of the time.”

Fiala opened the scoring in the first, flipping a rebound backhand over Raanta.

Garland, with his ninth goal in 20 games this season, took advantage of a mistake by Dubnyk in the second. Dubnyk played the puck behind his net, sending it out to the left where Nick Schmaltz intercepted the clearing attempt and quickly centred to Garland. He redirected the pass before Dubnyk could recover.

Parise scored on the power play 5:39 into the third, but Arizona quickly answered as Crouse scored less than two minutes later.

“There wasn't a ton of panic when they tied it up,” Parise said. “It's never easy to score one to go ahead and then give one right back up. But that's what we were dealt with. The game wasn't over. It was still a tie game. We got it done.”

Greenway was awarded the game-winning goal, his first goal of the season, after Jonas Brodin’s shot from the point ricocheted off Greenway’s calf.

“Listen, it’s been a good 20 (games), but there’s a little bit more there; we need more from some guys,” Coyotes coach Rick Tocchet said. “We need some people to make some plays for us at the right time. For the most part, it’s been a pretty consistent effort from the guys.”

NOTES: Minnesota tallied 20 shots in the first period, the most in a single period for the team this season and tied for the third-most in a first period in franchise history. .... Arizona was trying to finish off an unbeaten, three-game road trip. The Coyotes had earned points in nine of 11 road games this season and had a point in six straight on the road (5-0-1). ... Wild F Marcus Foligno was out of the lineup for the third straight game with a lower-body injury. ... Arizona D Ilya Lyubushkin was scratched for the fourth time this season.