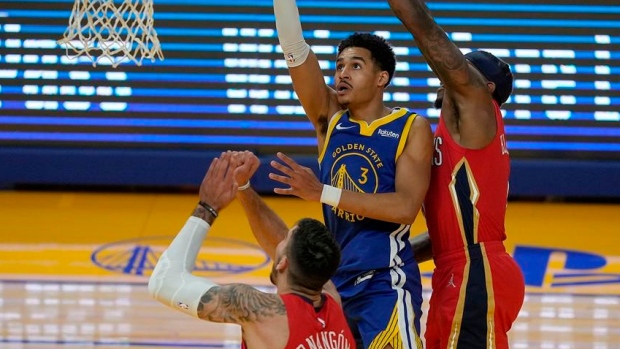 SAN FRANCISCO (AP) — Jordan Poole scored a go-ahead layup with 21.4 seconds left and made two free throws with less than a second remaining on the way to a career-high 38 points despite an injury scare in the third quarter, and the Golden State Warriors held off the New Orleans Pelicans 125-122 on Friday night while Stephen Curry and other stars rested with injuries.

Mychal Mulder added a career-high 28 points as the Warriors won their fifth straight game — all at home, including back-to-back victories Monday and Tuesday against two top West teams in Utah and Phoenix.

Poole shot 12 for 22 in his first career 30-point performance and third straight game with 20-plus points. Mulder had his third 20-point game and made seven 3-pointers.

Poole limped to the locker room with 9:52 remaining in the third quarter — two points shy of his career high in points — then re-emerged with ice wrapped around the ankle. He returned to the floor about four minutes later on a night House Speaker Nancy Pelosi sat in the first row of seats above the Pelicans bench.

Golden State's supporting cast again showed its talent on a night Curry and Draymond Green were among the Warriors regulars rested by coach Steve Kerr. Curry is still bothered by a tender tailbone he hurt falling hard on metal steps March 17 at Houston. Andrew Wiggins missed his first game of the season and has been nursing a sore left knee in recent weeks.

Kerr wants his team in top form for Sunday's game that will determine seeding: The Warriors must beat Memphis to secure the No. 8 seed and if they lose will wind up ninth. The eighth seed will play its first game on the road at the seventh seed while the No. 9 team hosts the 10th seed.

The Warriors had been with just eight healthy players in recent weeks, but welcomed back Paschall from a 21-game absence for a strained left hip flexor and he scored 12 points. In addition, Jordan Bell was signed to a two-way contract Thursday for a second stint with the Warriors.

Paschall entered at the 4:31 mark of the opening quarter for his first action since April 2.

Golden State's 41 points in the first quarter were a season high and the team's sixth 40-point quarter overall.

Kerr asked Wiggins if it mattered to him to play all 72 games and the veteran forward opted to instead be most fresh for Sunday’s game that will determine positioning.

“It was good to be able to get him a night to recover where he doesn’t have to play and hopefully the knee will calm down a little bit the next couple of days,” Kerr said. “He said he’ll be ready to go Sunday."

Bell played 15 minutes and was greeted by “Welcome back to the Bay!” when he entered with 2:06 left in the first.

He spent the 2017-18 and 2018-19 seasons with Golden State. He most recently signed a 10-day contract with the Washington Wizards at the end of April and appeared in five games, scoring 14 points and grabbing 19 rebounds.

Pelicans: Brandon Ingram (sprained left ankle) and Steven Adams (sprained right big toe) remained out and are expected to also miss Sunday's regular-season finale. “Yeah they’re both out, and going ahead I don’t think we’re going to see them again in these last two games," coach Stan Van Gundy said. "They’re not officially out for Sunday yet, but I think any expectation on that those guys are going to play would be wrong. The only guy who may come back Sunday is Wes (Iwundu). We’ll have to see what happens there, but I don’t expect the other two.” Iwundu has a sprained left shoulder. ... New Orleans finished its season road schedule with a 13-23 record and 7-14 vs. the Western Conference. ... The Pelicans have lost 26 of their last 30 regular-season meetings against the Warriors.

Warriors: Curry received his Western Conference Player of the Month trophy from general manager Bob Myers before the game. The two-time MVP averaged 37.3 points and 6.1 rebounds for April while making an NBA-record 3-pointers for a single month with 96. ... Kerr plans an update this weekend on the status of G Kelly Oubre Jr., who missed his 15th game because of a sore left wrist. ... Golden State lost 108-103 at New Orleans on May 4 after a 123-108 road win the night before.

Pelicans: Host the Lakers on Sunday night having lost four of five in the series and eight of 10.

Warriors: Host the Grizzlies on Sunday afternoon with seeding at stake.