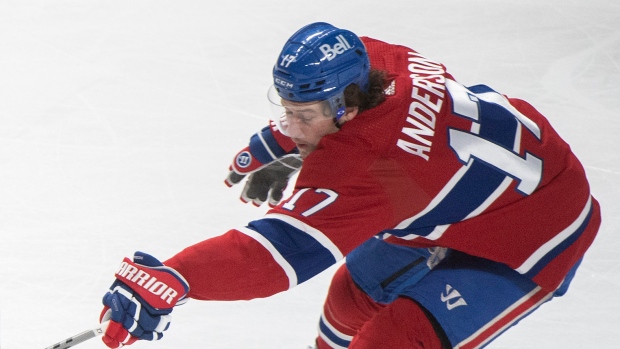 Montreal Canadiens forwards Josh Anderson and Paul Byron both left Wednesday's game against the Buffalo Sabres and did not return.

After the game, a 4-0 Montreal victory, the team announced both players went to the hospital for precautionary reasons but are now back with the team. The team says there is no timetable for either player's return to the lineup and each will be re-evaluated on Thursday.

Josh Anderson and Paul Byron (upper-body) were transported to the hospital for precautionary reasons, but are back with the team.

There is no timeline on their return to the lineup.

Anderson took a Casey Mittelstadt shot to the face late in the second period and was not on the bench to begin the third.

Just over three minutes into the first period, Byron took a hit from Sabres defenceman Mattias Samuelsson that left him with a bloody right nostril. He went to the bench and left the game shortly after with what the team later confirmed to be an upper-body injury.

The 27-year-old Anderson has 12 goals and nine assists in 40 games so far this season for the Canadiens, his second in Montreal since being acquired in a deal with the Columbus Blue Jackets involving Max Domi in October of 2016.

The 32-year-old Byron missed the first half of the season after having off-season hip surgery. He played in his 500th game on Feb. 17 in a 3-2 overtime win over the St. Louis Blues. He has a goal and an assist in eight games this season.

The Habs will be back in action on Saturday in Ottawa as they take on the Senators.