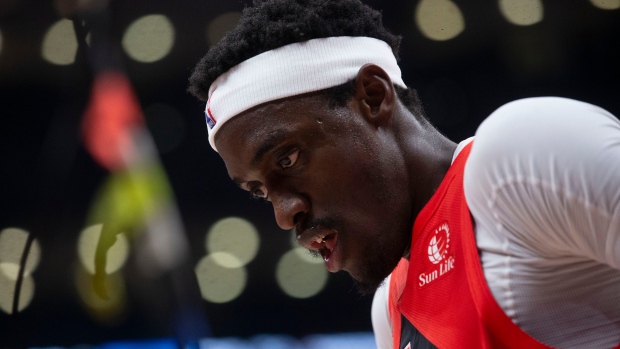 TORONTO – You could sense the frustration in Nick Nurse’s voice as he delivered the news just ahead of Wednesday’s game, and it was hard to blame him.

A day after telling us that OG Anunoby and Khem Birch would be out for the “foreseeable future,” Nurse revealed that Precious Achiuwa would also miss time.

How much time? The Raptors’ head coach knows better than to speculate at this point. Injury optimism hasn’t worked in his favour recently.

Nurse was encouraged by Anunoby’s progress a couple weeks ago and thought the star forward’s return was just around the corner before recovery from his hip pointer “hit a wall.” He was hopeful that the calf injury Yuta Watanabe sustained in training camp would be minor; it wound up costing him 19 of the season’s first 20 games and is still limiting his minutes.

So, with the lowly Oklahoma City Thunder in town on Wednesday, Toronto was missing its leading scorer and the only two centres on its roster, and it showed.

Less than a week after losing an NBA game by a league-record 73 points, the 7-16 Thunder and its 30th-ranked offence outscored the Raptors 33-12 in the third quarter to turn a 10-point halftime deficit into an 11-point lead going into the fourth quarter.

The Raptors’ defence locked in at the end of the final frame. They made things a little more difficult on Shai Gilgeous-Alexander, Oklahoma City’s young Canadian star, who scored 16 of his game-high 26 points in the third quarter. They hit some big shots, including the go-ahead layup by an unlikely hero, two-way forward Justin Champagnie, with 18 seconds left.

But after some defensive miscommunication freed Mike Muscala up for the game winning three-pointer and Champagnie’s tip-in was ruled to be on his fingertips as the buzzer sounded, Toronto’s comeback fell one point and one split second short.

Even under the circumstances, undermanned and undersized, this was a tough loss to stomach. Nurse wasn’t any less frustrated following the game.

“It was indicative of us just being in second gear all night,” he said after the 110-109 loss snapped his team’s mini two-game winning streak. “I thought we just weren’t ready to move and run, we weren’t pushing the ball hard.”

Although the Raptors have only had both of their centres, Birch and Achiuwa, in 12 of their 25 games this season, this was the first time that neither of them was available. If the team’s biggest need wasn’t glaring already, it’ll be pretty hard to miss for as long as those two are out.

With Chris Boucher getting the start at centre, they actually held their own in the paint and on the boards. Ranked last in the NBA on the defensive glass coming in, Toronto actually out-rebounded OKC 46-40. Most of their breakdowns came on the perimeter. But the Thunder don’t have much size and aren’t especially physical. Tougher opponents await.

The bigger issue, with three key rotation players missing, was that Nurse had to go deep into his bench and play guys out of position. Sparingly used wing Isaac Bonga logged 14 mostly ineffective minutes as the backup centre before Nurse eventually went to Champagnie in the fourth quarter.

It just so happens that two of the league’s most coveted big men may have become available this week. On Tuesday, The Athletic reported that the perennially middling Indiana Pacers are expected to shop some of their veteran players, including two-time all-star Domantas Sabonis and centre Myles Turner.

The Raptors have had “their eyes on” both of Indiana’s bigs for years, according to a league source; Turner in particular. It’s not hard to see the fit. The seventh-year centre and former lottery pick is leading the NBA in blocked shots for the third time in four seasons. He’s also hitting 40 per cent of his threes. Sabonis isn’t the defender that Turner is, but he’s one of the craftiest low-post scoring threats in the game.

Masai Ujiri and Bobby Webster will surely make a call and kick the tires, as they do whenever an impact player is believed to be available. But as the trade market heats up – this summer’s free agent signees are eligible to be moved starting next Wednesday, with the deadline scheduled for February 10 – they’ll have some big decisions to make.

Twenty-five games into the season, the Raptors are more or less who we thought they would be. They projected as a .500 team heading into the campaign. With some good fortunate and quick development, you could’ve imagined them being a hair better than that. With some bad injury luck, they’d probably be a tad worse.

They weren’t going to compete for a championship or anything like that, not this year anyway, but they promised to be a fun – and occasionally maddening – young team on the upswing. They were always going to show flashes and there were always going to be growing pains along the way.

At 11-14 and on the periphery of the play-in seeds in the bunched up Eastern Conference standings, these first seven weeks have mostly played out as most expected.

Internally, the goal is clear. They want to remain competitive in the short term while also building for a future they hope will come sooner rather than later. It’s a tough line to walk, and when they’ve had to veer in one direction or the other, they’ve prioritized development.

Scottie Barnes leads all rookies in minutes, affording him the luxury of playing through mistakes. Instead of finding a role for veteran Goran Dragic, they’ve sent him home and opted to use those backup point guard minutes on Dalano Banton and Malachi Flynn, a first and second-year player.

They’re balancing the present and the future, but when the latter has come at the expense of the former, they’ve mostly been fine with that, as frustrating as that can be for those in the business of producing immediate results.

“It seems to be our pattern: play well, play really bad, get yelled at, play really hard, do it all over again,” Fred VanVleet said after Wednesday’s loss. “So, it’s disappointing for sure but it is what it is.”

“You gotta show up to work and do your job everyday. It’s not about box score stats, it’s not about scoring, it’s not about awards, it’s not about individual accolades or individual plays. It’s about winning ball games and doing things the right way, and we just can’t seem to sustain that long enough to win against teams we must think we’re better than but it doesn’t work like that in the NBA.”

To open the conversation, the Pacers will surely be looking for a young player or two, as well as draft compensation. It’s hard to imagine the Raptors would part with any of their core four – VanVleet, Anunoby, Pascal Siakam and Barnes – for Sabonis or Turner, meaning it would likely cost them Gary Trent Jr. and multiple future first-round picks.

Injuries to Birch and Achiuwa aren’t likely to affect their decision one way or another; this front office isn’t one to make a trade like that simply to plug a short-term hole. However, that’s not what this would be. The centre position has been an area of need since Marc Gasol and Serge Ibaka left in free agency a couple off-seasons ago. It wouldn’t be a short-sighted move either, as both Sabonis and Turner are 25 and fit Toronto’s developmental timeline.

The question they’ll have to answer over the coming weeks is, do they want to expedite that process, and at what cost?