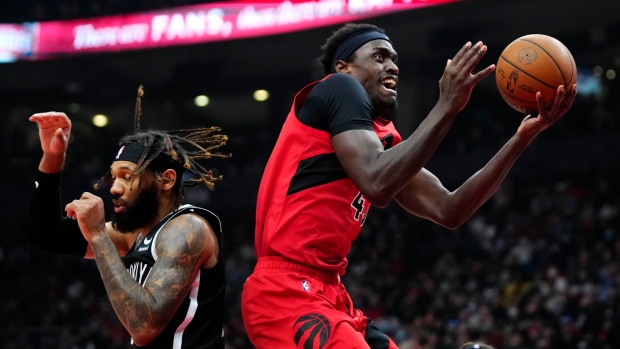 TORONTO – You could see the joy on Pascal Siakam’s face.

The Raptors’ forward took Blake Griffin into the post late in Sunday’s loss to Brooklyn, and his season debut. He backed the veteran big man down before pulling out one of his go-to moves: the spin.

Siakam evaded the defender, laid the ball up and in, and drew the foul. He couldn’t help but smile as he stepped to the free throw line to complete the three-point play. He missed that feeling.

It had been more than 600 days since he last played a game in Toronto, and almost six months since he played competitive basketball anywhere at all. Siakam underwent surgery to repair a torn labrum in his left shoulder in early June. It’s been a long and emotional road to get back on the court, but after months of blood, sweat, and yes, even a few tears, he’s here.

“I’ve been through a lot,” said Siakam after a 116-103 loss to the Nets dropped Toronto’s record to 6-5 on the young season. “I remember when [vice president of player health and performance] Alex [McKechnie] told me [I had] to get surgery. It was my first surgery [so I was] obviously super scared and I just remember crying. I don’t think I’ve cried like that since my dad passed away. I think just because of the season that we had [last year], I wanted go into the summer, I had so many things planned, and it just felt like another blow.”

“So today, obviously we didn't get the win, but it just felt great to be out there on the floor, it's been so long… I feel blessed, and I think that it's easy to just go day-by-day and forget about all the blessings, but I definitely feel blessed to be in this position and to be back on the court. I'm super happy.”

Siakam looked good, all things considered. He was a bit rusty, missing a few two-foot putts around the rim, the type of shots you would expect to see him knock down in a week or two, once he gets his rhythm and conditioning back. Admittedly, he needed to catch his breath a few times, which is understandable after such a long layoff.

“It was tough,” the 27-year-old said. “After my first three minutes I think I needed some gas or something. My legs were heavy and I think I couldn’t breathe at one point, but it was expected.”

Siakam has been practicing with the team for weeks, and was recently cleared for contact. After a quick trip to Los Angeles, where he visited with the doctor who performed his surgery, he was given the green light to return. Initially, he was expected to be back in mid-late November, so this was ahead of schedule. They thought about maybe waiting another week or two, getting him in a few more practices, but why not use game action to get back into game shape? He was capped at 25 minutes in his season debut, though he did reclaim his starting spot. Nick Nurse tried to limit him to short spurts, and he used elastic bands to keep his shoulder loose when he was on the bench.

For the most part, the fatigue didn’t show. Siakam looked spry. He ran the floor well, attacked the basket, made good reads, and was active defensively.

He drilled his first shot, an above-the-break three, early in the opening quarter. Dalano Banton found him for a transition layup in the second. He blew past the veteran Paul Millsap for the score and blocked Griffin’s shot from the corner.

There was a play in the third quarter that served as a good example of how Siakam – even at less than 100 per cent – should help open up Toronto’s offence. He drove into the paint and took two or three Nets defenders with him before kicking the ball out. After a couple more passes, the ball found Gary Trent Jr., who got into the lane and connected with Siakam on a baseline cut under the rim. Siakam started the possession by getting the defence on its heels and the ball moving from side to side, and he capped it off with a dunk.

“He’s going to keep finding his feet, his legs, but for the first game I thought he looked pretty good,” Fred VanVleet said of Siakam, who finished with 15 points, four rebounds and a couple of blocks on 5-of-12 shooting. “It’s good to have him out there. You kind of forget how much he can do and what he brings to the table. Obviously, he’s our franchise player and this thing is not going to go anywhere without him, so it's a good start.”

After taking a seven-point lead into halftime, the game was lost in the third quarter, when the Raptors’ scored just 17 points. Kevin Durant had 13 of his 31 points in the frame, as the superstar forward was back in Toronto for the first time since tearing his Achilles in Game 5 of the 2019 NBA Finals with Golden State.

The Nets are a legitimate title contender, and they looked the part on Sunday, even if they’ve had their own challenges to overcome. James Harden is still getting back to full speed after missing parts of last season with a hamstring injury that also limited his off-season training. Then there’s the Kyrie Irving saga.

“I don’t think we could have predicted how much stuff would be thrown at us,” said Nets second-year head coach Steve Nash, just before making his coaching debut on Canadian soil. “But that’s part of it. You have to be adaptable.”

“The job is largely a puzzle and trying to figure out solutions rather than dwelling on all these pieces sitting in front of you.”

Now that Nurse is getting an important piece back, his challenge is to put it all together.

The Raptors started Sunday’s game without a true centre, as Siakam replaced Precious Achiuwa with the first unit. It’s a lineup that featured Toronto’s five-best players – VanVleet, Trent, Scottie Barnes, OG Anunoby and Siakam – and truly embraces position-less basketball. Nurse hasn’t committed to it going forward, and has indicated he could change things up game-to-game, depending on matchups. With Brooklyn starting Griffin at the five, and with Khem Birch missing the game due to some knee swelling, it made sense to get an early look at it.

They may not be able to get away with it every night. Will they start small when they visit Joel Embiid and the Philadelphia 76ers on Thursday, for instance? But even their “small” lineup doesn’t feel so small. In the past, sacrificing size in the middle would be costly when they’ve also started a couple of point guards in the backcourt and Norman Powell at the three. Now, there’s size at every other position and length all over the floor.

When it’s functioning at a high level, the Raptors’ defence is predicated on movement and active hands, more than traditional rim protection. They’re at their best when they’re creating turnovers and generating opportunities to run. We got a glimpse of what that could look like in a centre-less lineup to close the first half, with the length of Barnes wreaking havoc defensively and leading to transition offence.

As much as they’ve missed his impact offensively, Siakam’s return gives Nurse another weapon on defence. There’s no stopping a player like Durant, but having multiple long, athletic and versatile defenders to throw at those guys is a nice luxury.

"It’s given us another athletic, skillful player out there," Nurse said. "I think the second quarter was how you’d draw it up, what it has to look like. We were everywhere. Every time somebody turned, somebody else was there and then we were out and running... The more bodies we have, the harder we should be able to play."

With each game, Siakam will get closer to his pre-injury form, but he’s aiming even higher than that.

The 27-year-old has been through a lot since then, and his struggles – both on and off the court – have been well documented. Visa issues meant he had to spend the first few months of the pandemic quarantining in Toronto. He was not in game shape when the 2019-20 season resumed in the bubble, and his play reflected that. He had an uneven campaign in Tampa, got COVID, and clashed with Nurse. Then he hurt his shoulder.

Instead of spending the summer training as he normally would, rehab had to be his priority. Still, some time away from the game gave him some perspective on these past couple years and a greater appreciation for where he’s at, in life and with basketball. He doesn’t just have his sights set on getting back to where he was, he wants more.

“With everything I’ve been through, feeling like you get knocked down everyday but you wake up and put your next foot forward and continue to go, that’s one thing I learned,” Siakam said.

“I just want to be happy and give everything that I have. I just want to go out there and play as hard as I can for my team. And this year we have a very good team. I think the potential is there. We just have to continue to work hard and play to our identity and hopefully we can win some games. Just be myself.”