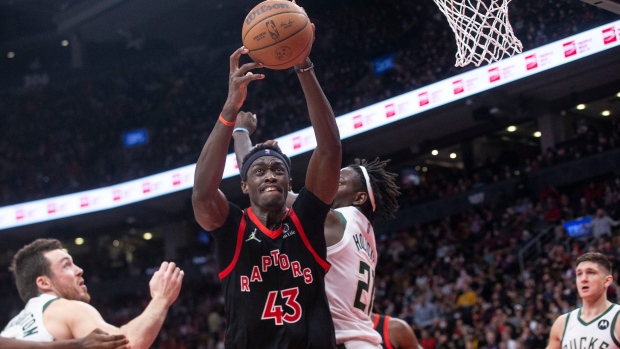 TORONTO – The last time Pascal Siakam was playing his home games in Toronto – before the world shut down, before his team relocated to Tampa, before he battled COVID and had his first-ever surgery – he could do no wrong.

A few months removed from signing a life-changing maximum salary contract, the Raptors’ forward was playing the best basketball of his career. He made his first all-star game. He was putting together an All-NBA-calibre season while leading an overachieving club to the second-best record in the league. He looked like one of the sport’s brightest young stars.

That was less than two years ago, but for Siakam, it feels like he’s lived a lifetime since. That’s the benchmark he set for himself and it’s one he’s been chasing, and will continue to chase until he gets back there.

Admittedly, Siakam is not a patient person, but he’s had to learn patience over the last seven months. After undergoing shoulder surgery in June and then missing training camp and the start of the season, he’s still working his way back into elite game shape.

Thursday’s game against the Milwaukee Bucks was his 12th of the season, though he says it feels like he’s already played 30. He’s making steady progress and starting to look and feel more like himself, but the process is still ongoing. He’s striving for consistency on both ends of the floor, but consistency is hard to come by when your body is still playing catch up.

“After being out six months and not doing that type of activity at that level of intensity and now you’re doing it, just finding ways to recover so that the days you feel good can last longer,” he said. “It’s taxing on your body and not being able to recover properly is not helping me to be consistent. So I think those things on the floor, just continuing to work and figure out ways to be effective, have the ball more in my hands or making plays and being way more involved. And I think that comes with your body feeling good and you having the conditioning level that you want.”

This is where Siakam’s newfound patience is really being tested, even more so then during those initial months of rehab. He’s not just trying to get back to pre-injury form, his goal is to get back to where he was prior to the pandemic and to continue growing from there. He understands that’s not going to happen overnight, it takes time, but he can also feel the sense of urgency creeping up.

Prior to their much-needed 97-93 win over a Bucks team missing its best player – Giannis Antetokounmpo was a late scratch, held out for rest on the second night of a back-to-back – the Raptors had lost 10 of 13 games and were 2-9 with Siakam in the lineup. They’re now 3-8 at home, a record that Siakam called “unacceptable” after a loss to the Ja Morant-less Grizzlies on Tuesday.

“It starts with me personally,” Siakam said. “I have to be better.”

“It’s easy to just get super rattled and antsy, obviously, because you’re losing. But just understanding the process and shutting out everything around and just focusing on the team and how we can get better and how I can get better, and knowing it’s going to be a process. You just don’t come back from a seven-month injury and expect to be at your best. And I think I expect that from myself because I work like that, but sometimes you have to understand the process and continue to work through it.”

So far, the results have been mixed. He finished Thursday’s game with 20 points, eight rebounds and four assists on 9-of-18 shooting. Not a bad line, all things considered, but 15 of those points came in the first half. His second half was mired with fouls (five of his six on the night) and some bad turnovers (four of his six).

Those have both been recent trends. He’s been getting off to hot starts and then fading or looking rustier late in games, and he’s been called for 16 fouls over the past three games. Both could indicate that he’s still trying to get his legs under him and build up his conditioning.

He’s had some shaky moments on defence, where his energy has waned at times, and to his point, he’s had good nights and bad.

Although the restrictions were lifted a couple weeks ago, his minutes are down slightly as Nick Nurse eases him back. Looking at his numbers coming into Thursday night’s contest, per 36 minutes, they’re right on par with where they’ve been over the last three years: 19.5 points, 7.7 rebounds, 4.1 assists, and he’s been more efficient than last season, shooting 46 per cent from the field and 33 per cent from three-point range.

“I think he’s trending upwards,” Fred VanVleet said. “I think there was a bad game here or there, but he’s looking like P to me.”

Siakam has become a lightning rod among factions of the fan base. Some of the criticism is fair. Although there are mitigating circumstances to explain a lot of his struggles since the 2019-20 restart, it’s a results-based business, and the results have fallen well short of what he’s shown that he’s capable of.

Where things get complicated is when people tie their expectations of Siakam to his contract, inferring that because he’s a max player he should be doing this or that. Max players are not made equal. LeBron James, Steph Curry, and Antetokounmpo are max players, but so are Andrew Wiggins, Tobias Harris and Kristaps Porzingis. It’s not the exclusive club that some people think it is. Some teams have as many as three max guys on the roster.

The reality is, you’re worth what the market says you’re worth. If the Raptors didn’t extend Siakam before his career season, you don’t think teams would’ve been lining up to offer him a max deal after it? That was the cost to retain a valuable asset. It shouldn’t change the way you feel about the player.

When he was “Pascal Siakam, the 27th-overall pick” he was everyone’s favourite success story. Now that he’s “Pascal Siakam, the max player”, in some peoples’ eyes, he can do no right. But he’s still the same guy, with the same lauded work ethic and the same remarkable journey that should make him easy to root for.

“It’s just not something I’m worried about to be honest with you,” Siakam said of the external expectations. “The opinion of people I care about are Masai [Ujiri], [Nurse], [VanVleet], my teammates.”

Take a page out of Siakam’s book and exercise some patience. He’s just 27 and it’s reasonable to think that his best years are still ahead of him. And if they’re not? He’s still a really good, albeit flawed player who has established a pretty high floor as an all-star and versatile two-way starter, when healthy. That’s plenty valuable in this league.

He just needs to get back there, and he’s working on it.

“I know that I’ll be better,” Siakam said. “And hopefully we can get some wins because that cures everything, I think.”