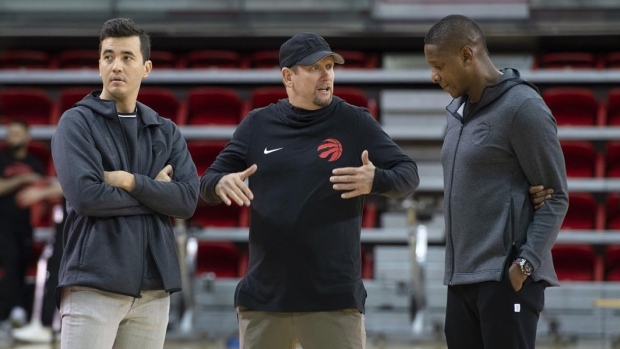 TORONTO – The top-four picks in Thursday’s NBA draft have been pencilled in for a while now.

Even before we knew which teams would find themselves in the fortunate position to select them, the assumption was that Oklahoma State star Cade Cunningham would go first overall, with explosive G League guard Jalen Green, versatile USC big man Evan Mobley and polished Gonzaga point guard Jalen Suggs following in some order.

So, when the Toronto Raptors parlayed the seventh-best lottery odds into the fourth-overall pick last month, not only did it seem advantageous in a draft that’s said to have four elite prospects at the top, but it also felt relatively straightforward. You take whichever player falls into your lap. Easy. But it’s never that easy.

The Raptors’ choice isn’t cut and dry, at least that’s not how they’ve approached it. Although the team has kept its cards close to the vest throughout this pre-draft process, even more so than usual, it’s clear that they’re considering all of their options heading into a crucial night for the franchise.

Could they move up? Would they move down? Will they trade out of the draft altogether? Those possibilities have all been discussed internally and are still on the table, if the right deal materializes.

But in the most likely scenario, where they keep and make the fourth-overall selection, they’ve still got a tough decision on their hands.

The temptation to go off the board is real for a team that’s never subscribed to conventional thinking when it comes to draft projections, especially because the players they could potentially go off the board for appear to be archetypical fits.

This front office, led by president Masai Ujiri, has long been intrigued by raw and rangy high-upside prospects, to mixed results. Much to their dismay, they missed out on Giannis Antetokounmpo in 2013 when they couldn’t acquire a first-round pick. A year later, they swung for the fences with Bruno Caboclo, and struck out. However, they also ended up finding a pair of franchise cornerstones in Pascal Siakam and OG Anunoby.

You can see why they might have a hard time passing on Florida State’s Scottie Barnes or Jonathan Kuminga, who spent last season in the G League – a couple forwards with notable weaknesses but substantial ceilings.

Barnes is one of the biggest risers in the draft. A uniquely skilled point forward, the soon-to-be 20-year-old can handle the ball and make plays on offence while using his 7-foot-2 wingspan to wreak havoc defensively. The thought of pairing him with Siakam and Anunoby in Nick Nurse’s defensive system has to be tantalizing for Toronto and simultaneously terrifying for opposing offences.

“The one thing about the Florida State system, it’s been very successful at churning out professional guys, but because they play limited [minutes] most of the time, you don’t really get to see the guy blossom in quite the same way while he’s there,” said Mike DeCourcy, a college basketball columnist at the Sporting News. “And so if someone said ‘I think there’s a ton there’, I would not argue that at all. He’s so physically powerful and he’s got such great size for his position.”

Conversely, Kuminga has fallen on most draft boards following an uneven campaign with G League Ignite. Still, at 18, the combo forward is one of the youngest and most athletic prospects in this class.

“I usually rate athletes in terms of dynamism on an A to C [scale],” said DeCourcy. “I usually don’t go below C if we’re talking about the NBA. There are guys like Andrew Wiggins, who’s an A+ in that department. Kuminga is an A++. You’re talking about next, next level in that regard. His skill level is still developing but I can understand wanting to have a guy who’s A++ with not just his dynamism but also his body, his build, the length, all that kind of stuff. And that’s all there. If you could get him to make a shot he could be a superstar.”

That’s the knock on both Barnes and Kuminga and probably the biggest thing holding them back from joining this class’ top tier; their shooting. Barnes only attempted 40 threes during his freshman year with the Seminoles, hitting just 11 (28 per cent) of them, while shooting an unimpressive 62 per cent from the free throw line. Kuminga shot 25 per cent from three-point range on 5.0 attempts per game and went 63 per cent from the line in his lone G League season.

However, if the Raptors are sold on either of their potential, they’re unlikely to be deterred by that particular flaw. Few teams have more confidence in their development system, and with good reason when you consider their track record of turning non-shooters into moderate (Siakam) or even near-elite (Anunoby) long-range threats.

If there were any team that would have the gumption to break up this preordained top four, it’d be the Raptors. And if that’s the direction they take, if “their guy” happens to be Barnes, Kuminga or someone else, they’ve earned the benefit of the doubt.

Still, the risk-taking draft philosophy that is so often associated with Toronto’s front office has become a bit overstated. Although Caboclo and Siakam were considered surprising picks at the time, they both came late enough in the first round that they actually weren’t much of a gamble. The only risk tied to the Anunoby pick was his health, coming off knee surgery, and even that was a tolerable risk at 23rd overall.

Nearly as often as they’ve gone off the board, so to speak, this Raptors’ front office has played it relatively safe with older, high-floor prospects like Delon Wright (20th overall in 2015), Malachi Flynn (29th in 2020) or most notably their only lottery pick, Jakob Poeltl (9th in 2016).

In this case, the opportunity cost of passing on the remaining top-four prospect may be too high.

Barring a shocking turn of events, Detroit will make Cunningham the top pick. From there, Green has widely been linked to Houston, who owns the second pick, and Mobley is expected to go third to Cleveland. That isn’t set in stone, but considering how much teams covet athletic wings like Green or modern two-way bigs like Mobley, it would be a surprise to see either fall to Toronto.

That leaves Suggs. There’s a time to go off the board, but sometimes the expected pick is the best pick, and this could be one of those instances.

He’s not a long and lanky combo forward, he won’t be the next Antetokounmpo or Siakam or Anunoby, but the 20-year-old point guard possesses many qualities that the Raptors are known to value.

He’s a tough competitor who plays hard and impacts the game at both ends of the floor. He’s a leader who’s mature beyond his years. And he’s a winner who has experienced team and individual success at every level in two different sports. He’s also not lacking for confidence.

“As far as where I go, that’s not something that I’m really too worried about,” Suggs said during his pre-draft media availability over Zoom on Tuesday. “I know I’ll thrive in whatever system, whatever city I end up in. But I will say, the [teams] that do pass up on me to take another prospect, it’ll come back and it’ll be to their detriment, honestly.”

Outside of Cunningham, Suggs might be the safest pick in this draft. He’s got an NBA-ready body, skill set and mind for the game. And just because he’s got a high floor doesn’t mean he has a low ceiling, as he rightly pointed out himself.

“I haven’t been a full-time basketball player yet,” said Suggs, who was also a standout quarterback in high school. “I’ve always had to split the time between football [and basketball]. During football season I never touched a basketball. For that five months while I was locked in on football all the basketballs were put up in the closet and weren’t touched until I was done. I think I have, honestly, the most improvement to make out of anybody in this draft. Couple that with the work ethic that I know I carry and, honestly, it’s scary to think about how good I can become.”

While Suggs wouldn’t confirm whether he’s worked out for the Raptors, he lauded their player development system as “off the charts” and spoke about their G League team’s proximity to Toronto and the club’s success stories, including Siakam, Chris Boucher and Fred VanVleet. So, he’s done his homework.

The uncertain status of starting point guard Kyle Lowry, who will officially become a free agent four days after the draft, complicates the fit, especially with VanVleet and Flynn also on the roster.

Still, Lowry will be highly coveted on the open market and there’s a reasonable chance his historic tenure with the Raptors is nearing its end. In that scenario, Suggs would surely help ease the transition. Even if Lowry is back, he’ll turn 36 in March and has shown that he’s both capable and willing to co-exist with other high usage guards in the backcourt.

Besides that, the Raptors are coming off their worst season in a decade, they only have four players under guaranteed contract for next year and are about to make their highest draft selection since 2006. They’re in no position to be picking based on positional need. There is obvious pressure to get this right.

When they’re on the clock this coming Thursday evening, their plan is to take the player they believe to be the best available. The big, franchise-altering question will be, who’s their guy?​