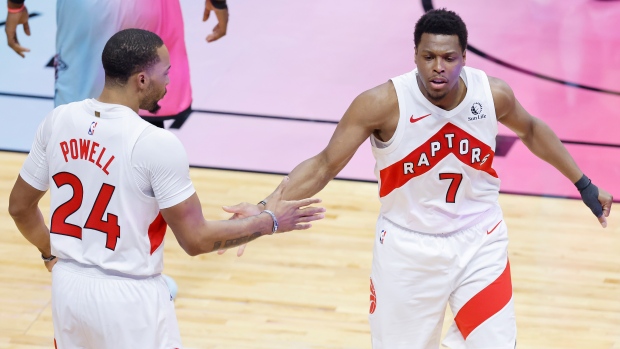 TORONTO – For the Toronto Raptors, this very important week may end up being all about the future, but it’s hard to look forward without also looking back and getting a bit nostalgic.

Over these past eight years they’ve enjoyed the kind of sustained success that most organizations can only dream of. What makes it so fascinating, even to this day, is that few – if anybody – saw it coming.

This run, easily and by far the most prosperous in the franchise’s two and a half decade history, was a happy accident. It was born of a couple trades – one that went down and one that, serendipitously, did not.

The deal that turned Rudy Gay and his bloated contract into spare parts in 2013 was meant to set them on a rebuilding path. The subsequent deal that nearly sent Kyle Lowry to the Knicks was supposed to be the next step in that process. Both helped lead them to where they are today.

After seven straight post-season appearances, nine playoff series victories and an NBA championship, the Raptors and their fans are coming to terms with an unfortunate reality – nothing lasts forever.

Hope of salvaging their tumultuous 2020-21 campaign is quickly fading, and with Thursday’s 3 p.m. ET NBA trade deadline on the horizon, management has some very big – and potentially very difficult – decisions to make.

Is it time to turn the page on this era, and its most iconic player, and chart a course for what comes next?

It’s a dilemma that’s magnified by the position they find themselves in just days before the deadline – sitting 11th in the Eastern Conference with a 17-26 record and riding a nine-game losing streak – but not one that’s likely to be swayed too heavily by it.

Truth is, team president Masai Ujiri and general manager Bobby Webster never stopped planning for the future. From the moment Kawhi Leonard left them for the Clippers in the summer of 2019, less than a month after leading them to a title, they’ve been trying to navigate it while also attempting to make the most of the present. It’s a fine line to walk – a balancing act they were able to pull off last season, when they finished with the league’s second-best record.

This year has thrown them just about every curveball imaginable, though. Some of it’s been out of their control, to be sure. The temporary relocation to Tampa has done them no favours and the mid-season COVID-19 outbreak derailed the progress they were making in digging themselves out of an early hole. Still, not pursuing Serge Ibaka and Marc Gasol more aggressively last fall and replacing them with journeymen on short-term deals will go down as a rare misstep for this front office, especially after their presumed target in the 2021 free agent sweepstakes, reigning two-time MVP Giannis Antetokounmpo, signed an extension to stay in Milwaukee.

They still believe in the core. If the deadline was a month earlier, before COVID hit and brought the team to its knees, the likely plan would have been to add around it – upgrade the centre position and maybe bring in some veteran depth to help them make a push in an usually tight Eastern Conference playoff race.

Their view of this club and what it’s capable of at full strength hasn’t changed but the situation has. They’re only 2.5 games out of the 10th seed, which would give them a chance to squeeze into the post-season via the play-in tournament. However, with fewer than 30 games left and the team showing no signs of turning things around, they have to ask themselves if the opportunity cost is worth trying to salvage this season.

As of last week, the Raptors were still telling inquiring teams that they had no intention of moving Lowry ahead of the deadline, but plans can change quickly in the NBA – Ujiri and Lowry know that better than most.

Lowry and Norman Powell – who will certainly decline his player option for next season – are headed for unrestricted free agency this summer, and if they’re not part of the Raptors’ long-term plan, they owe it to themselves to test the market and see what they could get back for those guys now.

Ujiri was working under Bryan Colangelo in Toronto’s front office when Chris Bosh left for Miami in 2010. At that point, he swore to himself that – given the opportunity to run the show – he would never let a franchise player walk without getting something back for him. Less than a year later, his first signature move as a lead executive in the NBA was trading disgruntled star and soon-to-be free agent Carmelo Anthony to the Knicks and securing an impressive haul for Denver.

Of course, it’s not always that simple, especially in Lowry’s case. There’s tangible value to holding his Bird Rights – either to re-sign him or for a potential sign-and-trade. There are also obvious sentimental reasons for keeping him around and allowing his tenure to play out organically, especially if that’s Lowry’s preference. This isn’t just a franchise player, it’s the franchise’s greatest player ever. A different philosophy applies, you would think.

As of Tuesday night, that’s where the Raptors stood in regards to a Lowry deal. For Lowry to be moved ahead of Thursday’s deadline, one, he would have to give the go ahead on a trade and approve of the destination, and two, a team would have to make a strong enough offer to entice Toronto.

This is not an impulsive front office. If they wouldn’t have pulled the trigger on a deal before their ninth straight loss on Monday – an embarrassing defeat at the hands of a Houston Rockets team that had dropped 20 straight contests – then they’re not going to do it now.

According to multiple sources, the two teams with reported interest in Lowry, as well as the means to match his salary and put together an intriguing package – Miami and Philadelphia – have been reluctant to make their best offer. For the Heat, who are short on first-round picks to trade, that offer would probably have to include sophomore guard Tyler Herro. For the Sixers, rookie Tyrese Maxey and picks merely starts the conversation.

A lot can happen between now and 3 p.m. on Thursday. At some point in the not-so-distant future, change is coming for the Raptors, that much is clear. The question is how much of it will unfold this week.​