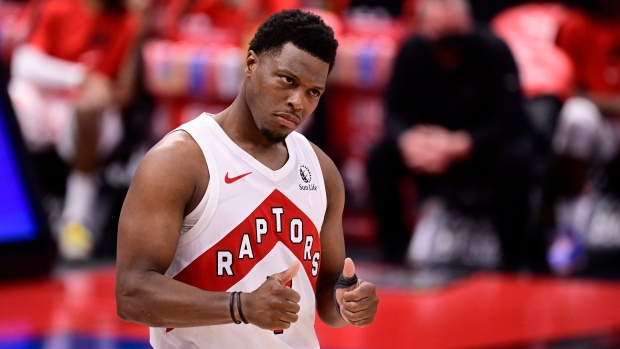 TORONTO – Kyle Lowry’s nine-year relationship with the Toronto Raptors is fascinating for a whole bunch of reasons, not the least of which is the sheer number of times it has almost come to an end.

He’s nearly been traded on multiple occasions since his tenure began just short of a decade ago. He’s nearly left in free agency on multiple occasions, too. They’ve squabbled, damn near broken up more times than either side can count, but somehow, someway, something always seems to keep them together, and it’s worked out pretty well for both parties.

But with Thursday’s NBA trade deadline approaching and Lowry rumoured to be on the block, the time to go their separate ways had finally arrived, or so many thought.

Don’t write Lowry’s Raptors eulogy just yet, though. The most important player in franchise history isn’t done adding to his legacy.

Toronto took it down to the wire, reviewing offers from three interested teams – Miami, Philadelphia and the Lakers – right until the buzzer, but in the end nothing materialized, and none of the parties involved were unhappy about that.

Up until recently, the Raptors had not seriously considered moving the veteran point guard. Even in recent days, as they started listening to offers, they were never aggressive in soliciting them.

Lowry and his representatives, who were consulted throughout the process, made it clear that they would be content with playing out the rest of the season before hitting free agency in the summer. As such, the Raptors felt no pressure to send him elsewhere. They always insisted that they would be more than comfortable hanging onto him past the deadline unless somebody met their lofty asking price. They weren’t bluffing, as teams would ultimately find out.

The offers on the table for Lowry were underwhelming, according to multiple sources. There was a lot of posturing from some savvy front offices, but even in those final moments before the clock struck 3 p.m. ET nobody blinked, and neither did Raptors president Masai Ujiri or general manager Bobby Webster.

“There are one million things we talk about and you do one, and sometimes you do none,” Ujiri said on Thursday evening. “Did we come close to doing something? Maybe in my mind I might say yes, but maybe on the other team it wasn't so close, so you don't even know… There are a couple things that seemed like [they] could get done, but we've learned that a lot of times these things, a lot of them don't happen, too.”

The Raptors held strong and opted not to give a franchise icon away for pennies on the dollar, which should be applauded, but it also made for an unusual deadline day.

In many ways Wednesday’s dominant win over the Denver Nuggets, which snapped a nine-game losing skid, felt like an appropriate send off for Lowry. Even he wondered if it might have been his final game in a Raptors uniform – although that thought had crossed his mind before.

What many anticipated to be a transformative deadline day for the organization turned out to be relatively quiet, all things considered. The Raptors did make three moves; sending their second-longest tenured player, Norman Powell, to Portland for third-year wing Gary Trent Jr. and veteran journeyman Rodney Hood, and swapping a couple depth pieces – guards Matt Thomas and Terence Davis – for second-round picks. Good business, but somewhat uninspiring relative to expectations.

The sense was that this would be a crossroads for the team – a chance to choose and commit to one path or the other. Either they’d declare themselves sellers, turning the page and ostensibly bringing an end to the golden era of Raptors basketball, or they’d look to buy and improve their chances of making a run this season. They didn’t really do either, but that’s a reflection of the market as much as it’s an indictment of them.

What’s important to remember is that you can’t wish an offer or a trade into existence. The Raptors were willing to move Lowry, as difficult as that decision would have been, if they could replenish their developmental pipeline with the assets – picks and prospects – they believed he was worth. That opportunity never presented itself, though.

The two concerns that kept coming up in talks with other teams, according to sources, were Lowry’s age – he turned 35 on deadline day – and his contractual situation. He’ll be an unrestricted free agent this summer, he’s not eligible for an extension during the campaign, and any attempt to discuss his next deal prior to the off-season would be deemed tampering, so teams were flying blind on his plans for the future.

The Sixers and Lakers feared the possibility of giving up key assets for a rental. Feeling like they’ll have a good shot at signing him outright in free agency this summer, the Heat were reluctant to increase their offer and include sophomore guard Tyler Herro.

It seems like a miscalculation, particularly on the part of the Sixers and Heat, who intend on chasing a championship but are a piece away from separating themselves in a tight Eastern Conference race. It might be a case of overvaluing their own assets, or undervaluing Lowry, or some combination of the two. Regardless of age or contract, Lowry is the type of player that’s valuable enough to shift the balance of power in the NBA, and clearly the Raptors were surprised that nobody was willing to pay up for him.

“We’re going to be biased in some kind of way, you always are with your players but for Kyle we’re extremely, extremely biased because of what he does and what he stands for,” said Ujiri. “When you look at what’s out there, it’s difficult sometimes, even for those teams, to see his value.”

Moving Powell was not unexpected and always seemed more likely than finding a deal for Lowry, if for no other reason than the market was bigger.

Powell essentially priced himself out of the Raptors’ long-term plans with his excellent season. He’s going to decline the player option on the final year of his deal and become a free agent in the summer, at which point he’ll command an annual salary upwards of $20 million. Somebody will pay it but it wasn’t going to be the Raptors.

It would have been hard to justify spending that kind of money, especially with what they already have invested in their core of Pascal Siakam, Fred VanVleet and OG Anunoby, and the need for flexibility to build around them. For all of Powell’s offensive gifts – he’s turned himself into one of the league’s best and most efficient scorers at his position – he’s not a two-way player like those other three. The Raptors were determined to turn him into an asset instead of losing him for nothing.

Trent is somebody that they like and see fitting better on their timeline and alongside their core. He’s 22, five years younger than Powell, and while he’ll be a restricted free agent this summer, the cost to re-sign him should be lower. Trent emerged for the Blazers in the bubble last season and he’s carried it over into his third campaign, averaging 15.0 points in 41 games.

He can shoot the three (40 per cent this season) and score in transition. Offensively, he’s nowhere close to Powell’s level, not at this stage of his career anyway, but he projects to be an above average defender.

It’s a smart move – trading a player just as he’s about to become expensive for a younger and cheaper player that fits into the system – but it’s not one that’s going to make them better in the short term. They also didn’t address their glaring hole at the centre position or add to their depth.

This team wanted a chance to prove that they could salvage the campaign, and given everything they’ve faced – namely the relocation to Tampa and a COVID-19 outbreak that derailed their mid-season progress – Ujiri felt he owed it to them.

“They fight together, you see they like to play together and, yeah, there’s been ups and downs, you guys have seen it, there’s been challenges, but at the end of the day, when you come into our locker room with these guys… all of them really come together,” Ujiri said. “We’re lucky, we’re blessed that we’ve been a winning organization and hopefully we can continue that in some way or another. There may be stops along the way and adversity along the way but I think the overall culture we need to keep going and these players are a huge part of it.”

Despite their 18-26 record, good for 11th place in the East, they’re still in the race. They’re 1.5 games out of 10th, which is where they’d need to finish to guarantee a spot in the play-in tournament, and a tough but manageable four games out of sixth. They showed what they’re capable of in the win over Denver, but the same issues that have plagued them all year remain – the centre position, the lack of depth, inconsistency on defence, among others – and now they’re going to have to do it without Powell, their third-leading scorer.

It’s hard to feel any better about the present or any differently about the future. However, if you’re looking for a silver lining to an otherwise underwhelming day, it means the Lowry era continues for at least another few months.​