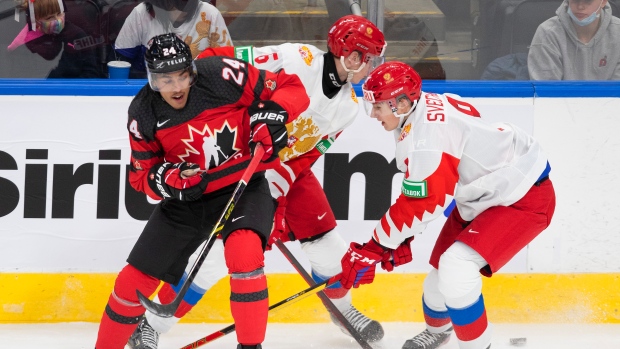 The IIHF Disciplinary Panel has issued a one-game suspension to Team Canada forward Justin Sourdif for an illegal check to the head/neck, it was announced Tuesday.

The IIHF Disciplinary Panel has issued a one-game suspension to @HockeyCanada forward Justin Sourdif, for a violation of IIHF Playing Rule 48 - Illegal Check to the Head or Neck.

As TSN's Mark Masters reported, Sourdif was the 13th forward at Monday's skate, being replaced by Dylan Guenther on his usual spot on the third line alongside Ridly Greig and Jake Neighbours.

The Surrey, B.C., native has eight goals and 21 assists in 21 games so far this season for the WHL's Vancouver Giants.

Here are the expected lines according to Masters: