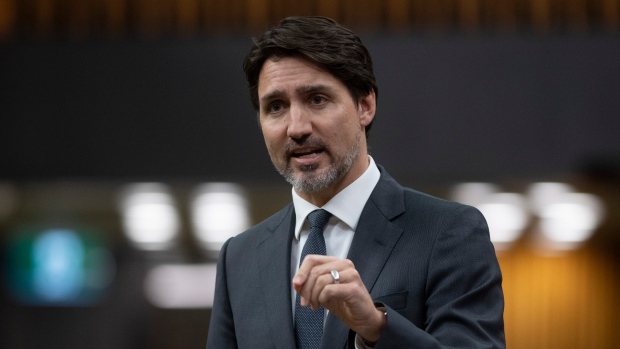 Prime Minister Justin Trudeau said Tuesday that the federal government is "comfortable" with the National Hockey League having a hub city in Canada, as long as local health authorities approve.

"We have indicated that we are comfortable with moving forward on an NHL hub in one of the three Canadian cities that are asking for it," Trudeau said of Edmonton, Vancouver and Toronto. "Obviously the decision has to be made by the NHL and the cities and the provinces in the jurisdiction, but Canada is open to it as long as it is okayed by the local health authorities."

Trudeau's comments come after he announced that Canada and the United States had agreed to extend the current border restrictions on non-essential travel through July 21.

TSN Hockey Insider Pierre LeBrun reported Monday morning that, as of then, none of the 10 NHL teams in contention to be a hub city for the league have been told they're out of the running.

LeBrun notes that the Canadian federal government’s impending decision on quarantine likely looms large on the NHL’s cut down process. Currently, federal law mandates that anyone entering Canada would be subject to a 14-day quarantine, making it difficult to see the Canadian locales currently in the running – Edmonton, Toronto and Vancouver – as viable NHL hub city options and for Canadian teams holding their training camps north of the border.

TSN's Ryan Rishaug reported last week that it looked like there could be a solution on the way from the federal government that could allow all three Canadian markets to stay in the running as possible NHL hub cities.

On May 26, the league announced its intention to resume the 2019-20 season with 24 teams centralized in two hub cities that have yet to be determined. The NHL and NHLPA announced Thursday they are targeting July 10 as the start of Phase 3 (training camp) should it be deemed safe.

LeBrun also noted Monday that the decision on the two hub cities will be made in conjunction with input from the NHLPA.

Also important to note: NHLPA is in the loop on the Hub city process. Decision will be made in conjunction with input from the players. Point being, this isn’t the league just saying here are the 2 cities.

Las Vegas has been considered a front-runner to serve as one of the two hub cities.  Chicago, Columbus, Dallas, Los Angeles, Minneapolis/St. Paul and Pittsburgh were also listed as options by the league on May 26.