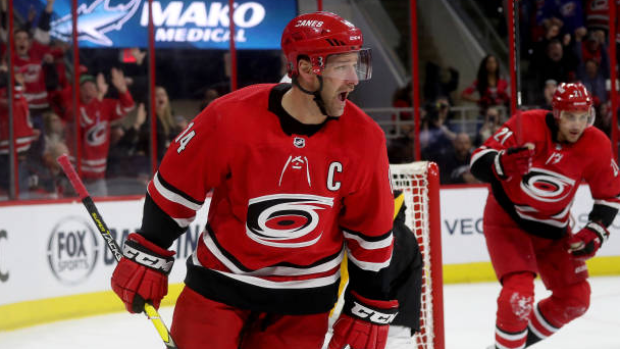 Justin Williams kept the door open for a return prior to the season, and it appears he's getting in shape to potentially return to the NHL.

The 38-year-old announced ahead of training camp that he would "step away" from hockey, but he did not announce his retirement.

Now, TSN Hockey Insider Pierre LeBrun reports Williams has been “ramping up his skating,” and has been in touch with the Carolina Hurricanes regarding a potential return.

"He could return. It’s not 100 per cent decided at all, but he’s been ramping up his skating, skating by himself the last three to four weeks," LeBrun said on Insider Trading. "And there has been talk back and forth between his camp and the Carolina Hurricanes. That certainly would be the team of choice, the frontrunner for Justin Williams if he decides to come back. However, the Hurricanes are tight against the cap. Remember, they had the Patrick Marleau buyout and they signed Jake Gardiner in camp. They can’t sign him to that big of a deal.

"It will be interesting to me because I believe that his camp would also be willing to hear from other teams. Again, the priority is Carolina, but there could be other teams that reach out and make this interesting."

LeBrun added Wednesday that if Carolina can bring Williams back, they would like to do so in the month of January to give him as much time as possible to get up to speed.

In an ideal world, if Williams decides to come back, and if Carolina can find a contract that works, the 'Canes would like him back in the fold sometime next month... give him as much time as possible to get back up to speed.

Williams posted 23 goals and 53 points in 82 games this past season, his highest offensive totals since the 2011-12 season. He did so while playing out the final season of a two-year, $9 million contract signed with the Hurricanes in 2017, returning to the team eight years after being traded to the Los Angeles Kings. He added four goals and seven points in 15 playoff games.

He is currently an unrestricted free agent.