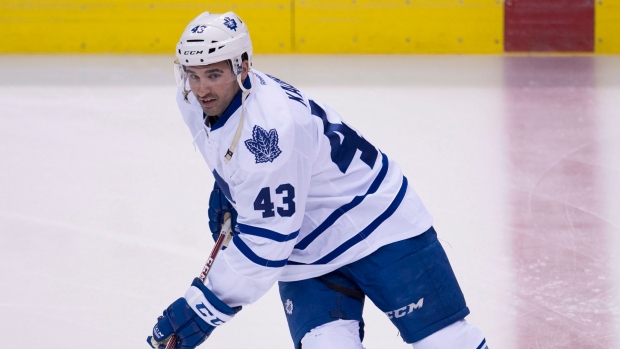 Toronto Maple Leafs forward Nazem Kadri has been suspended four games for a hit to the head of Edmonton Oilers forward Matt Fraser, the NHL Department of Player Safety announced on Wednesday.

The incident occurred in the third period of the Leafs' 4-1 loss. Fraser was concussed on the play and had to be helped off of the ice.

Oilers coach Todd Nelson said after the game that he didn't believe there was any malice in Kadri's hit.

“It was a play where (Fraser) was reaching, he was down a bit," said Nelson. "We’ve seen those hits before where the player comes in and it’s just a check. Sometimes, when you’re bending over reaching for a puck, those things happen. It’s the game of hockey, it happens.”

Considered a repeat offender by the NHL, this marks a second suspension for Kadri over his five NHL seasons. The 24-year-old was suspended for three games in November of 2013 for a hit to the head of Minnesota Wild goaltender Nicklas Backstrom.

In 66 games this season, the London, Ontario native has 16 goals and 20 assists.

Kadri will be eligible to return on Saturday, March 28 when the Leafs host the Ottawa Senators.