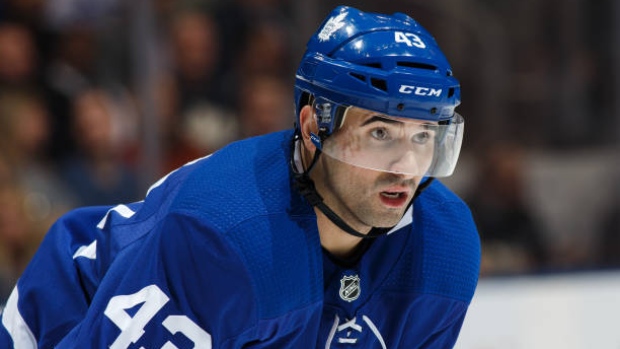 The 27-year-old was not at practice on Friday, and Leafs head coach Mike Babcock used the opportunity to shake up his lines. Leo Komarov moved up to the top line with Auston Matthews and William Nylander, while Zach Hyman, who scored the team's lone goal in Game 1, formed a line with winger-turned-centre Patrick Marleau and Mitch Marner. Andreas Johnsson, who was healthy scratch in Game 1 was added to the fourth line, replacing Komarov:

Kadri took exception to an elbow to teammate Mitch Marner from Wingels in the third period and replied by taking a run at the Bruins forward after he tumbled to the ice, earning a five-minute major for charging and a game misconduct in the process.

"I just felt like he made contact with Mitchy's head to start, and I didn't see a call there," Kadri said postgame. "He was turning up the wall so I was committed to the hit, and then he ended up falling. It happened pretty quick. It's in the hands of the NHL."

Kadri said he believes it would have been a clean hit if Wingels had not fallen to the ice.

"It's out of my control at this point. I certainly wasn't trying to hit him when he was down like that. I was already committed to the hit. If he's still standing up, there's nothing wrong with that."

According to TSN Hockey Insider Bob McKenzie, Kadri isn't technically a repeat offender -- a penalty that applies to players suspended within the last 18 months -- because he was last suspended two years ago, but "repeat offender" status means the loss of wages is calculated differently than non-repeat offenders and since players don't get paid in the playoffs, the distinction doesn't mean much now. Kadri's previous suspensions can still be used against him when determining any potential punishment for the Leafs' forward. McKenzie also notes that playoff and regular season games are not treated equally for suspension purposes.

Kadri was suspended four games for cross-checking Luke Glendening in 2016, four games for a hit to the head on Matt Fraser in March of 2015 and three games for running goaltender Niklas Backstrom in November of 2013.