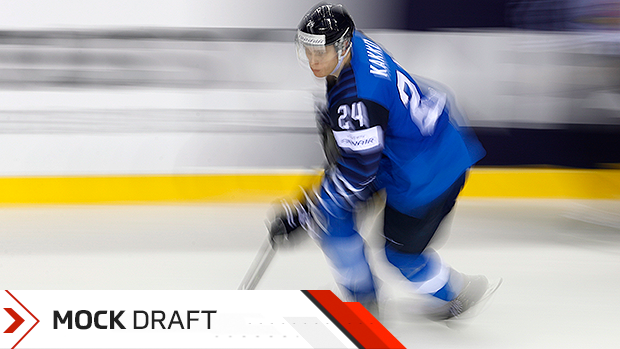 Kaapo Kakko’s string of highlight-reel plays at the world hockey championship are generating a lot of buzz, but his strong performance isn’t enough to knock American centre Jack Hughes out of the top spot in TSN Director of Scouting Craig Button’s latest NHL mock draft at the conclusion of the third round of the playoffs.

The 18-year-old Finnish right winger has six goals through seven preliminary round games at the tournament in Slovakia, lighting up social media with his dazzling puck skills. Hughes is also playing in the tournament, managing just one assist in six games for the Americans before he was a healthy scratch for Tuesday’s game against Canada.

“If New Jersey wants a winner, they should pick Kakko,” Finnish coach Jukka Jalonen told the New York Times this week. “…Hughes is a great player as well, but in the important games, Kakko has always been better. He is already playing like a man. He could play in the NHL right now, and in a few months, he will be even better. After a few years, he will be one of the best players in the world.”

Still, the top of Button’s mock draft remains unchanged: Hughes to the New Jersey Devils at No. 1, followed by Kakko to the New York Rangers.

“Kakko is a terrific player. There’s no question that at the start of the season Hughes stood alone as the top player in this draft class, but Kakko has shown through his play that there’s a credible conversation to be had about who should be in the top spot,” Button said. “But if two prospects are this close I’m still taking the centre over the winger every time – unless that winger’s name is Alex Ovechkin.”

The rest of the top six remain locked in place from our last mock, with Vancouver Giants defenceman Bowen Byram to the Chicago Blackhawks at No. 3, Saskatoon Blades centre Kirby Dach to the Colorado Avalanche at No. 4, American scoring phenom Cole Caufield to the Los Angeles Kings at No. 5 and Dylan Cozens, a 6-foot-3 centre from the Western League’s Lethbridge Hurricanes, to the Detroit Red Wings at No. 6.

The Edmonton Oilers are the first Canadian team on the board, picking USNTDP left wing Matthew Boldy at No. 8. The 6-foot-1, 192-pound Boldy is a blend of power and skill who should develop into a nice compliment to Edmonton’s centre depth.

The Vancouver Canucks are the other Canadian franchise with a selection in the top 10, and Button has Russian right wing Vasili Podkolzin as their pick at No. 10. Podkolzin, who played at three different levels for SKA St. Petersburg this season, has bounced around in previous editions of the mock draft, sitting as a high as the third spot and as low as No. 13.

Button has the Montreal Canadiens addressing their blueline depth by taking Mississauga Steelheads defenceman Thomas Harley at No. 15.

“Harley gives the Habs another solid young left-shot defenceman in their system to go along with Alexander Romanov,” Button said. “He reminds me of Thomas Chabot at the same age.”

The Ottawa Senators have the No. 19 pick as part of the Matt Duchene trade with Columbus, where Button sees London Knights centre Connor McMichael as a fit.

“McMichael has excellent speed and he uses it to attack effectively,” Button said. “He’s also a really intelligent and competitive player who can help so many different areas of your team.”

The Calgary Flames have the 26th pick, where Button has them taking 20-year-old Prince Albert Raiders right wing Brett Leason.

The overage forward was passed over in consecutive NHL drafts, but he broke out with 89 points in the Western Hockey League this season and earned a spot on Canada’s World Junior team. Leason also had 25 points in 22 playoff games, helping the Raiders win the WHL championship and a place at the Memorial Cup.

“I project him to eventually be in the Flames lineup alongside Matthew Tkachuk and Mikael Backlund on the second line,” Button said. “He’s a good reminder that you have to let players develop at their own pace.”

NOTE: Buffalo acquired this 1st-round pick from San Jose for winger Evander Kane on February 26, 2018. They also acquired St. Louis' 2019 1st-round pick (30th or 31st depending on the outcome of the Stanley Cup Final) for centre Ryan O'Reilly on July 1, 2018.

As part of Anaheim's deal trading defenceman Brandon Montour to Buffalo on February 24, 2019, the Ducks have the right to select the Sharks' or Blues' pick from Buffalo. Anaheim has until the day before the 2019 NHL Draft to decide. Under this scenario, Anaheim makes the pick.