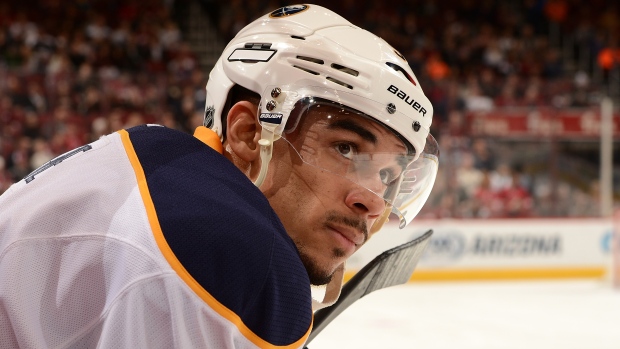 Buffalo Sabres general manager Jason Botterill said Monday he took the best offer he received for winger Evander Kane, but admitted he was never offered anything higher than a conditional first-round pick.

Botterill traded Kane to the San Jose Sharks for a conditional first-round pick – which will become a second-round pick if Kane is not re-signed by San Jose – plus a fourth-round pick and forward Dan O’Regan.

Kane has 20 goals and 20 assists in 61 games this season and the Sabres were believed to be asking for four assets, including a first-round pick, as return for him earlier this year.

The 26-year-old's character has been called into question throughout his career, dating back to a rift with teammates while he was with the Winnipeg Jets. And it's believed to have been a factor in Kane's perceived value around the league ahead of the trade deadline.

Kane defended his character in a conference call after the trade, noting there have been no recent incidents.

"We're not talking about last week or last month. We're talking about a number of years ago," Kane said, per the Associated Press. "I've grown up a lot since then and I've moved on from it and I think I've shown that over the course of the last two or three years. It's something I've put behind me."

Last month, Kane got into a shouting match with Justin Falk during a Sabres practice after a battle with Kane led Zach Bogosian sustaining an ankle injury. Falk called selfish while on the ice, though both players downplayed the incident afterwards.

“Our guys were well aware, and Evander admits he’s grown up and matured,” Sharks general manager Doug Wilson said Monday. “He’s 26 now. He’s a man who wants to be a dominant player in this league. I’m not sure we were all perfect angels when we were 20 or 21.”

Wilson did not rule out re-signing Kane in July, though he said he'll first focus on how he fits with the group.

“We certainly like his game and his ingredients,” Wilson said. “Let’s get him in here, get to know each other and then we’ll go from there.”