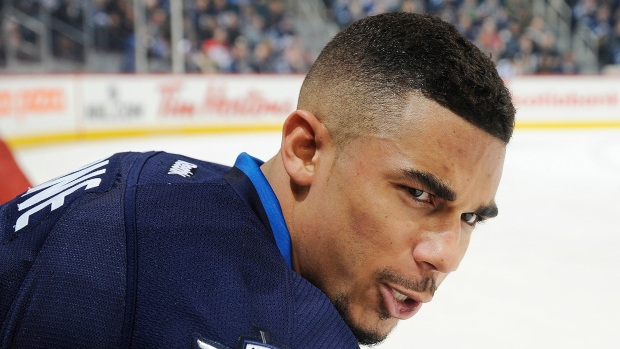 The Winnipeg Jets plan to keep whatever transpired with Evander Kane on Tuesday within their own walls.

"What happens in the room stays in the room," Jets captain Andrew Ladd said Friday. "It will stay that way."

Kane was a healthy scratch for the Jets' Tuesday night game against Vancouver by "coach's decision." Initial reports suggested that Kane was scratched because he violated the team's dress code at a meeting earlier in the day. However, reports surfaced on Thursday that a locker room incident could have been at the root of the decision.

Defenceman Mark Stuart backed up his captain, maintaining that whatever transpired was exclusively the team's business.

"I know you guys love this stuff," said Stuart, "you know, it's your job, but - and I'm not trying to insult you guys, but you have no idea what goes on in this room. I mean, you may hear stories once in a while, but that's the way it should be. Things shouldn't be getting out."

"The day-to-day and over the last three, four years... you guys really have no clue."

Jets head coach Paul Maurice revealed on Friday that Kane will have shoulder surgery in the coming days, with recovery expected to take 4-to-6 months.

The 23-year-old forward missed practice on Thursday, as well, visiting with team doctors. Kane has missed multiple games to injury on two separate occasions so far this season. He missed eight games due to a knee injury in October and again went down with a lower-body injury in December and January.

In 37 games with the Jets this season, Kane has scored 10 goals and 12 assists. He is in the third year of a six-year deal he signed with the Jets worth an average annual value of $5.25 million.

Stuart added that the most important element to the team's success is that all the Jets' players give their utmost.

"What makes a good teammate is looking out for each other and holding guys accountable at the same time," Stuart said. "But most importantly is going out there on the ice and working hard for each other every night and doing the right things."

"This is your job and guys take their jobs extremely seriously, as they should. So maybe when you're not taking yours as seriously as you should, that's disrespect to the other guys. I think guys in this room realize that."

Former Jets head coach Claude Noel is a man who knows Kane well, having spent parts of three seasons with the winger.

A guest on TSN Radio 1050 Toronto's Leafs Lunch on Friday, he said that while Kane was at times a distraction during his Jets tenure, he believes it was never excessive.

"The thing that you look at is: how much noise do you need or do you need to create? That kind of throws a little wrench in your team, so that always affects you as a coach," Noel said.

"We had our scenarios here and there but I didn’t find him to be over the top."

However, Noel added that Kane was still a top talent that could help a lot of NHL teams, whether or not that team happens to be the Jets.

"If I had a team that missed an element like that, I wouldn’t be afraid to bring Evander Kane into my situation."